welcome to console, which Blizzard made a nice profit from game sales, but did bugger all to fix the myriad and multitude of issues unique to consoles…

They have zero interest [in fixing issues], and you have zero chance of getting your money back.

My simple advice: boycott all future Blizzard titles. It’s what I plan to do.

But that’s why I paid! - if I buy a pound of bread, and I get only half of it.
the deception!

Ok I’ll bite… What exactly is wrong with Diablo 3 on the console? I do not own a computer so I’ve never played it on pc. I do how ever own Diablo 3 on console. On console atleast there is no internet required, my understanding is pc requires an internet connection. So I wouldn’t be able to play it on pc anyway. Internet speed has always been a problem. I’m curious however to know what I’m missing out on.

That’s just a quick run down…

All of this is information that was available before you bought the game on console.

I expected (and with good reason) for the game to be the same, no matter what the platform…I mean, many other games don’t gimp/screw the console port when compared to the PC version of the game…D3 is about the ONLY 1 that I can think of that does this…

The old US forums are now gone apparently, but homerjnick has resurrected the NG thread on the new US forums: 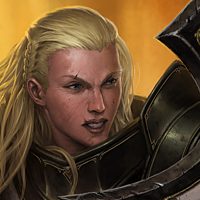 Nephalem Glory is Holding Us Back (recreated)

If anyone can afford to do solution E I bet you get a PTR only for your own account in consoles & you might be the only console player here given access to write anywhere without the purchasing D3 PC version. Moreover you get the highest ranking...

it about sums up the issues with NG mechanics, FOV and density issues. Given at how close some console players get to PC level clears, we must be clearly far superior skill wise [than PC players].

Blizzard has done SFA to fix the myriad issues with console, despite many players reporting said issues over the past 3-4 years…we just get ignored. PC players whine and Blizzard immediately responds…I think it’s quite fair for console players to get the same customer service experience that PC players do…hell, we can’t even report bugs - our only option is to create a forum post and that gets completely ignored by the blues and devs…

Console players haven’t had a SINGLE Blue response since the new forums were released…not ONE.SINGLE.RESPONSE. How many blue/dev responses have the PC parts of the forums had? mmm?

Blizzard used to make quality games…D3 is not One of them. They used to have great support, that is non-existent now imho.

edit: should I be happy if a HC char dies whilst loading the level? I mean, monsters attacking and hitting my character before the new level has even loaded…NG globes disappearing and reappearing…monster attacks such as molten disappearing - if you’re played a ranged char like UE MS and kill a grotesque off screen and vault forward and don’t see any molten but it triggers and kills you, should I be happy with this? PC got a buff to stash space, but consoles didn’t, due to very BAD game design on the console port. We can’t share items with our group in seasonal play (which PC can). Lag and rubber banding, even when playing solo, with some maps/levels being worse than others. Remember the fallen pennant? Fixed for PC version of the game, but some moron @ Blizzard didn’t ensure it was fixed on the console port…we had to wait an entire season/new patch to get it fixed. NG/health globes/progression globes disappearing permanently if you moved more than a screen away from them (console only bug, didn’t happen on PC). So many issues, so few fixes. Should I, as a consumer, be happy with this approach from Blizzard? Should others?

Do you even play the console version of the game? I presume that you don’t. If you don’t, then you have no idea what you’re talking about, or what the player experience is like. Go away and play the game on console before criticising console players who are rightly ired with Blizzard’s lack of quality and action on fixing issues with the console port of the game.

Have a nice day.

Again, all of this information was available before you bought the game. You will not get your money back.

I didn’t ask for my money back. I want Blizzard to pull the finger out and listen to customers and fix genuine issues with the console ports of the game. They don’t ignore PC players, so why do they ignore console players?

question? you think it’s fair…(as opposed to consoles)
I pay the same for a game.
and here it is- Blizzard doesn’t care about players…

we just want to be treated fairly!!!

PC players don’t typically care - if it doesn’t affect them directly, they ignore it. Plus, they usually consider console players inferior and cheaters etc.

If all honesty is in demand, I have had no issue with Console. I’ve played both PC and Console, and I enjoy both equally, despite the differences.
Console players have it harder because it’s always the console players who complain that games are too easy. PC Gamers are usually fairly casual, and just play to play. You do have hardcore PC Gamers, but I’m speaking for the general public, not the niche groups. Also… NG is in BOTH versions. It was initially only added to Console versions, but not long after was added to PC as well. Both versions of the game have NG as a means to double your damage output. It’s been in the game for a long time, nothing new. This information has been here for a long time before you bought the games. I have no idea why people keep saying PC version only has Speed Boost for their NG, both console and PC only get the Speed boost at level 2 NG. All levels have double damage. This info is not only apparent in the game, but freely given on the Blizzard/Diablo3 Websites and Wikis…

I list the mistakes:
you die on the rift - every 5-6 you don’t live again …why???
Above 120 I don’t have a pylon…why???
lag set in multi…why???
sometimes the mission cannot be completed (bounty)…why???
throws me out of the game-quite often…why???
it gets stuck in countless cases…why???
and so on…
and think you have a good gaming experience???
i just want to play !!

I haven’t had any issues with the game before though on PC or PS4, so if you’re having all these issues its more on your end, not the game’s fault.

You are very much wrong - NG on PC does NOT add any dmg to the player’s character. It adds a speed buff, and that is it. It is very much very different to the way NG works on console. You need to play console some more if you think this is how it all works…

I’m not sure what you mean by die on the rift - I have NEVER had a SC console character die and not be revivable. Yes, there is a bug where you can’t revive, simply quit the game and restart and your SC character is back, voila (had it happen a few weeks ago actually) It is not a common issue though, I’ve had it happen 3 times in 4 or so years…

I get pylons above GR120 - I find no differences in pylons between < GR120 and above. And, I’ve done a fair whack of GRs!

I’ve never had a bounty set not completable because an individual bounty has bugged out on me. I think I’ve done 10k bounties on console. And, I hate doing bounties…and I’m solo. If I was a group player, I’d have even more bounties to my name…

I don’t get thrown out of the game, but I’m solo. I do have the game freeze on me, it prolly happens once a fortnight. Not a major bug, but a p.i.t.a.

The game does have issues, but the issues you’re listing here aren’t what I’d consider major issues. I may criticise the game, and the D3 devs, but I’m pretty impartial.

With point 4, I’ve had regular crashes. Most of my mates have also had regular crashes with the game (roughly the same frequency as me, around once per fortnight of regular playing). If you haven’t had a crash, then you’ve been very lucky. Crashes got a lot worse from the 2.4.3 patch onwards. Again, mates have indicated that they feel crashes got worse from 2.4.3 onwards. I’m not imagining it, it does happen, and it happens to a fair whack of my mates. Note: standard PS4. dbase rebuild and reinstall of game does not help. Experiences have taught me that some character classes/builds are far more likely to crash than others (UE MS seems to trigger crashes quite frequently, so does impale).

I’ve played both RECENTLY. I have friends I play with in both console and PC community. I’ve also just played Console RECENTLY (as recently as last night), and PC yesterday afternoon. I’ve seen 0 difference between how the NG works. The speed boost is only AFTER you’ve stacked the orbs enough. I even asked friends about this subject to find if they saw any differences, and I got the same response from them. I have no idea where you get that PC is only Speed boost.

Edit: I’ve just went on both games simultaneously to check the buffs, they both have different Buff descriptions, but essentially do the same thing. I was wrong about 2 things, the speed boost for PC does happen earlier than Console, BUT you still get the damage boost, and I just tested the difference. With my 400 Para Wizard (I used it at lower levels to see better number range differences), I was dealing 1113K per hit on average, with NG It shot up to over 2M per hit on average. There’s a CLEAR difference in damage there and that damage difference went down when I lost NG.

The 2 differences in NG on Console and PC is that 1. PC gets the Speed boost early, so that can contribute to faster kills and 2. Console gets the NG Early. PC is seemingly 1 orb at an RNG interval during a kill spree, while Console is set in stone at every 10 kills in a spree.

You are very much wrong. Many experienced players would heavily disagree with you. Check the US console forums for a thread started by my mate homerjnick. Blizzard conveniently deleted the old thread on the original forums…

I mean… I’m playing D3 on PS4 right now… and I was just on PC earlier today with one of my closest friends… So I mean, I’ve got recent experience, not to mention years of experience in the game >-> I’ve been PC player since RoS release, and PS4 player since it launched. So being “experienced” I would believe has nothing to do with this issue. Disagree if you wish but it won’t change what I was seeing through my testing.