After taking a break from Overwatch for several years, I decided to play again. Back then I mainly played Soldier 76. I prefer Competitive mode, so I wanted to jump into that. However, since so few people seem to want to play Tank or Healer these days, and I don’t want to queue up for 10 minutes every game as a DPS, I decided to focus on the tank role, even though I’m not that great at that.

I did my 5 placement matches the other day as a tank in Role Queue mode, plus 1 or 2 additional games, but I’ve been getting flamed by team mates several times now. Obviously they were being snarky and toxic and didn’t specifically say what I’m doing wrong and what I should improve. My main mistake is probably trying to do too much offensively, rather than just protecting my team.

I was placed in Gold (years ago, I was in Platinum was Solider 76). Maybe I belong in Silver now as a tank - who knows? My thinking is that every game in Role Queue mode needs tanks, regardless if it’s Bronze or Diamond, so it should be fine if I learn to play in competitive mode, because I’ll eventually get placed where I belong, right? And the 3 different roles have separate placement matches anyway, so it’s not like I was placed in Platinum because that’s what I was as a DPS.

What do you guys think? Is it OK to jump into competitive mode as a role one doesn’t have much experience with? It’s not like I’m trying out a different tank every game; I’m focusing on Reinhart, and when someone else picks him, I tend to go for Zarya.

Lastly: anyone have good advice for new tanks? I’ve been watching some guides on Youtube yesterday and will go through some more today.

well tanks are weird as most will criticize you for failing but can’t actually help you improve and tell what you’re doing wrong exactly, that’s why most people who get into tanks to begin with stick with going off-tank which usually have a bit more firepower and follows the main tank around, essentially being guided a bit.

about main tanks is that they all play vastly different in their approach and how they maintain their effective range.

reinhardt is probably the most straight forward tank in the game as it’s basically move forward as safely as possible while protecting those behind him from the main bulk of the damage and it’s a bit of finessing being able to move forward and managing shield energy to get there, but where it really gets interesting with rein is when he’s at swinging distance wether he should swing or shouldn’t swing at the enemy.

which requires some thought behind every swing, is it to bait abilities by swing canceling or to face tank some damage to preserve the barrier a bit longer or to put pressure on the enemy team and he’s safe to do so or not, because really with rein it’s hard to disengage and all that boils down to is measuring how well your team is doing versus their team and you press when you have advantage or back up when it’s going south.

however some good rein players press forward to create space while things is going south and try to swing back the advantage into his teams favor.

but the general gist of all main tank players is to tank for the other players in the team in some form of way, either by making it harder for enemies to do stuff or to make it easier for your team to do stuff, now there’s nothing that says you can’t tank by killing enemies, but that’s really only possible when you have the space and right circumstances to do so.

Main tank is a whole different game from any other role. I’d suggest watching some pro tank play, or top 500 main tanks to see how they take position.

well, it could be misleading trying to watch proper teams play compared to the teams you will have in more casual ranks.

the difference often lies in how much you are able to pull weight by yourself in lower ranks and fending for yourself as people are not that great at team play in lower ranks for various reasons so that shift a bit how you have to play tanks in those cases.

Yeah, I still have this “must deal damage” mentality and that’s really bad when playing Reinhardt. Knowing when it’s safe to chase people with my hammer or charge at them, and when it’s better to hold the position or move back is something that requires a lot of experience.

I guess it’s better to just play slightly more cautiously with Rein, since he dies really easily when he charges in against multiple enemies without backup, and can’t just escape quickly like Winston or DVa can.

I main Orisa. She’s able to push back attacks in a defensive role, as well as push back defences in an attacking role. In a sense she’s an “all-rounder”, but I realised quite early on in playing Orisa that her most effective involvement comes from sticking to the core of the team and in constant contact with a healer. This is because Orisa is slow and if I don’t have support then I need to break off from the battle to get heals. I’m rambling on about Orisa, but that’s because you referenced that you’re playing Rein. Orisa is actually a natural counter to Rein in that she can use her Fortify ability to nullify Rein’s Charge and Earthshatter abilities. Rein’s real danger comes when he’s in swinging distance with his hammer, but Orisa can also use her Halt ability to pull Rein away when he’s too close. Orisa can also deal a lot of damage from a distance. The point I’m trying to make is that if you want to improve your play it’s important to understand your opponents. Learn who you’re strong against, who you’re weak against, and why.

yeah, but sometimes as reinhardt you’re just doomed because someone else died and at which your only course of action is swinging for the fences trying to get some extra charge for shatter for the next push you try.

but how are you feeling about the sense of gratification from doing hard to execute maneuvers, that’s something i felt went missing a lot when i started playing support and tank, but my solution to that was fairly easy, i just picked tanks that had some hard to execute stuff that i found fun.

if you’re playing tanks i can’t recommend playing winston enough, winston really became a lot of fun when i learned primal juggling, allthough winston will take some time to get used to because he’s not a straightforward tank, but if you get past that he’s fairly easy and you can get bored but only til you learn the primal juggling stuff which will make you want to grill their team as often as possible just to get primal so you can practice your juggling skills on your enemies.

what i mean by primal juggling is when you leap at an enemy, land, start primal and smack them and when they are airborne you smack them in the air and land ontop of them to get a third smack, if they aren’t dead by then you continue doing this air smack to them and you can basically carry them across the entire map doing this, but sure you can use primal for other things aswell as eat ultimates and so on or push teams off the cliffs etc.

in any case primal juggling is really fun and challenging even when you get used to it.
here’s a vid of it to show you what it looks like. 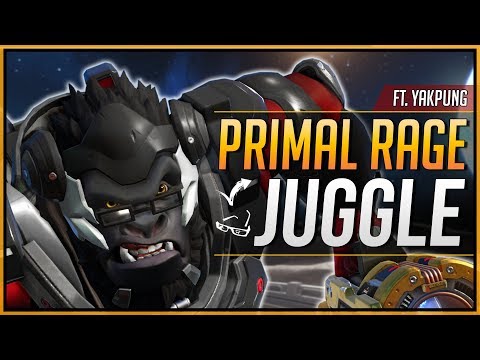 It is perfectly fine to play whatever mode you enjoy the most.

So what if you play badly, I am pretty sure your team will be making just as many (if not more) mistakes… they just want to deflect and make someone else the target.

As long as you are slowly learning from these mistakes, all is good!

My tip for “new” tank players will always be 2 fold…