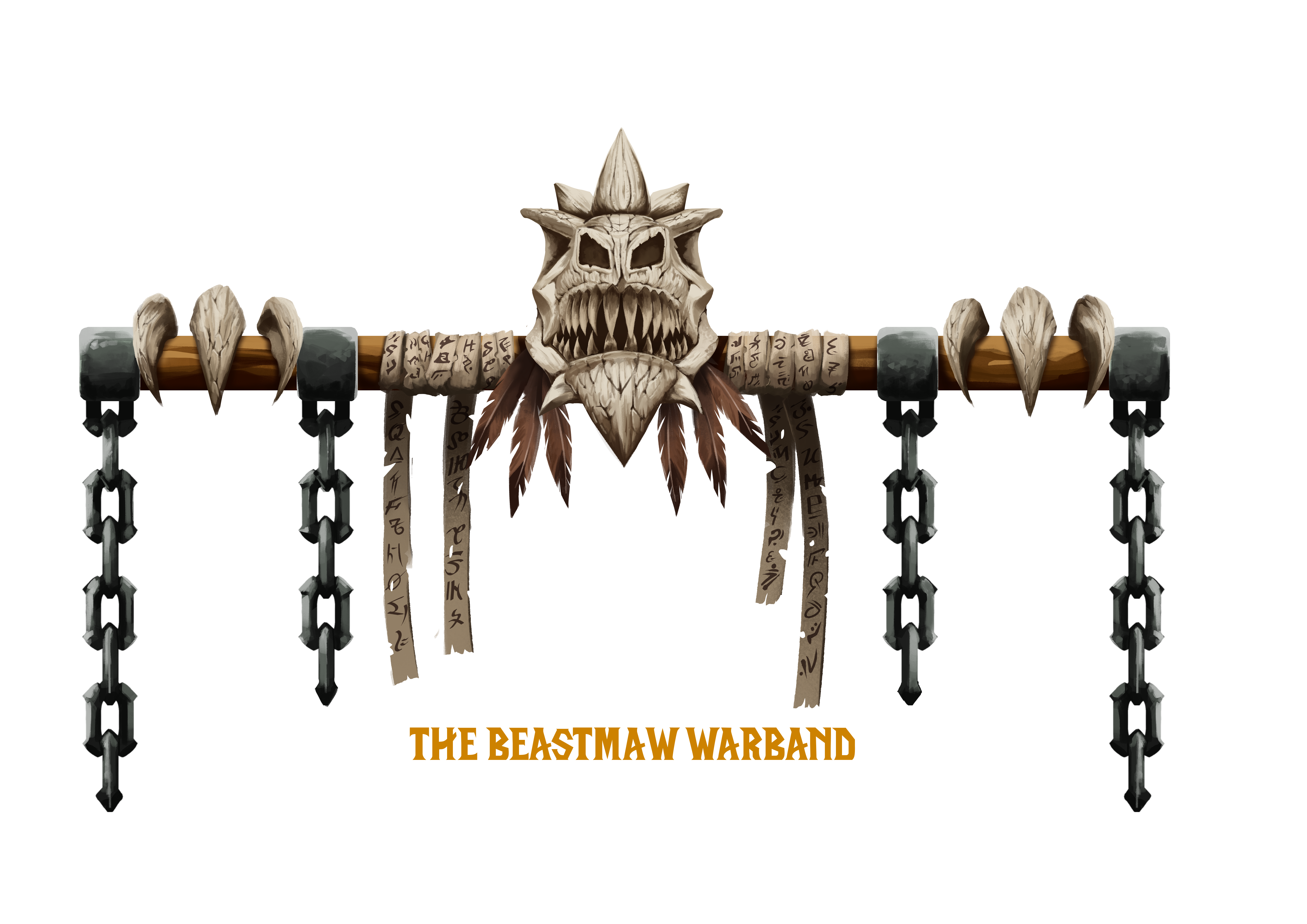 The Beastmaw Warband was formed in the early days of the War with the Scourge to serve the Horde on the warfront as scouts, trackers and tamers of war beasts whence the band’s name derives. It has since participated in every conflict that followed. It is a seasoned band, boasting veteran warriors who have survived numerous battles and military campaigns against the Alliance and the Scourge; have explored Pandaria; have braved the Iron Horde’s Draenor; and seen Argus itself to slay a Pit Lord in its own lair…

Strength and discipline are demanded by the Beastmaw, and honour is valued the most. Each warrior is expected to have a code and follow it.

Beasts are one main aspect of the warband. The Beastmaw take pride in the impressive beasts of war they have tamed and trained for riding, siege and transporting supplies; beasts as small as silithid and as massive as clefthoof. Shamanism is the other major part of the Beastmaw tradition, with every new warrior having to take the Trial of the Hunt and earn the blessing of the spirits.

We are an RP guild based on Steamwheedle Cartel/the Sha’tar/Moonglade EU and founded in 2009. Our goal is to host a platform for storylines for and by the members, with immersion as the main focus. The theme of the guild is a mix between Horde military, beastmastery and shaman tradition. Our style of RP cycles between sandbox casual evenings and DM-based events with a simple D20 roll system which follow personal storylines or an overarching plotline.

We have a friendly, tight-knit and relaxed OOC atmosphere. The guild is quite open to people new to the game, to roleplay and to Warcraft lore in general, and we are always glad to help out with advice and guidance.

Guild RP sessions are held twice a week – on Thursdays and Sundays at 20:00 game-time - with a focus on following a storyline. Immersion is our top priority, with flavor-enriching details like playing out travel time, establishing thorough defenses when camping in the wilderness, and making the world around us feel huge. We also strive for inclusion, anybody can influence our plotlines and NPCs.

RP varies from adventure-style expeditions to casual campfire nights. While the Beastmaw is part of the Horde military, our military events are not at all strict and focus more on the fun aspects of being a warrior of the Horde rather than on hyperrealism. The only realism we care about is that in the context of Warcraft.

We have an active Discord server with channels for both IC and OOC interactions. There are also channels describing the guild in detail, and channels with regular IC updates so that anybody can keep track and can jump into the action whenever they want.

Our requirements and expectations:

We have no restrictions on class, race or level. The only requirement is to have a convincing IC reason for joining.

No uniforms, though we encourage creativity in matching the guild tabard.

We are looking for members who can most of all show activity and interest in the guild. We expect people to pull their weight OOC as well as IC, being able to initiate RP on their own when there is none, interact with the other members, and not passively wait for RP to happen. We are not a huge guild, and we ensure that there are no nameless faces in a crowd – while we try to make sure that everyone has a spotlight and the chance to develop their character through interactions, we are just as dependent on the members showing their own initiative to create dialogue.

Drama is best kept IC and under control in order to avoid OOC stress that can lead to a member losing interest. We also require that everyone is on their best behaviour to roleplayers outside the guild and avoid ignoring outsiders trying to make contact with us.

Generally be nice to each other, don’t harass, don’t grief, and don’t misrepresent the guild tag.

New members go through a few weeks with the rank of New Blood, during which they are expected to earn their keep.

Feel free to whisper or mail an officer ingame if you want to join or even just hang out:

And for that full declassified feel, here are some of the images that I made and we used throughout the campaign.

Our NPCs are all compiled in these two panels, which changed quite a bit with corresponding IC developments. Starting with the Taka’ai at the start and the end of the war:

Credit to Ronto for drawing some of these characters!

The plot was centered around the Alliance Blackwarden Keep, which looked like this before and after the Horde conquest of it:

It was located on a small and unimortant made-up island somewhere in the Eastern Kingdoms, which suffered a Void Assault towards the end:

The Campaign was great! Here’s hoping the next one will be just as epic!

Nicely done guys, great to be a part of it all as always. Looking forward to what the future holds

Taka’ai at the start and the end of the war: 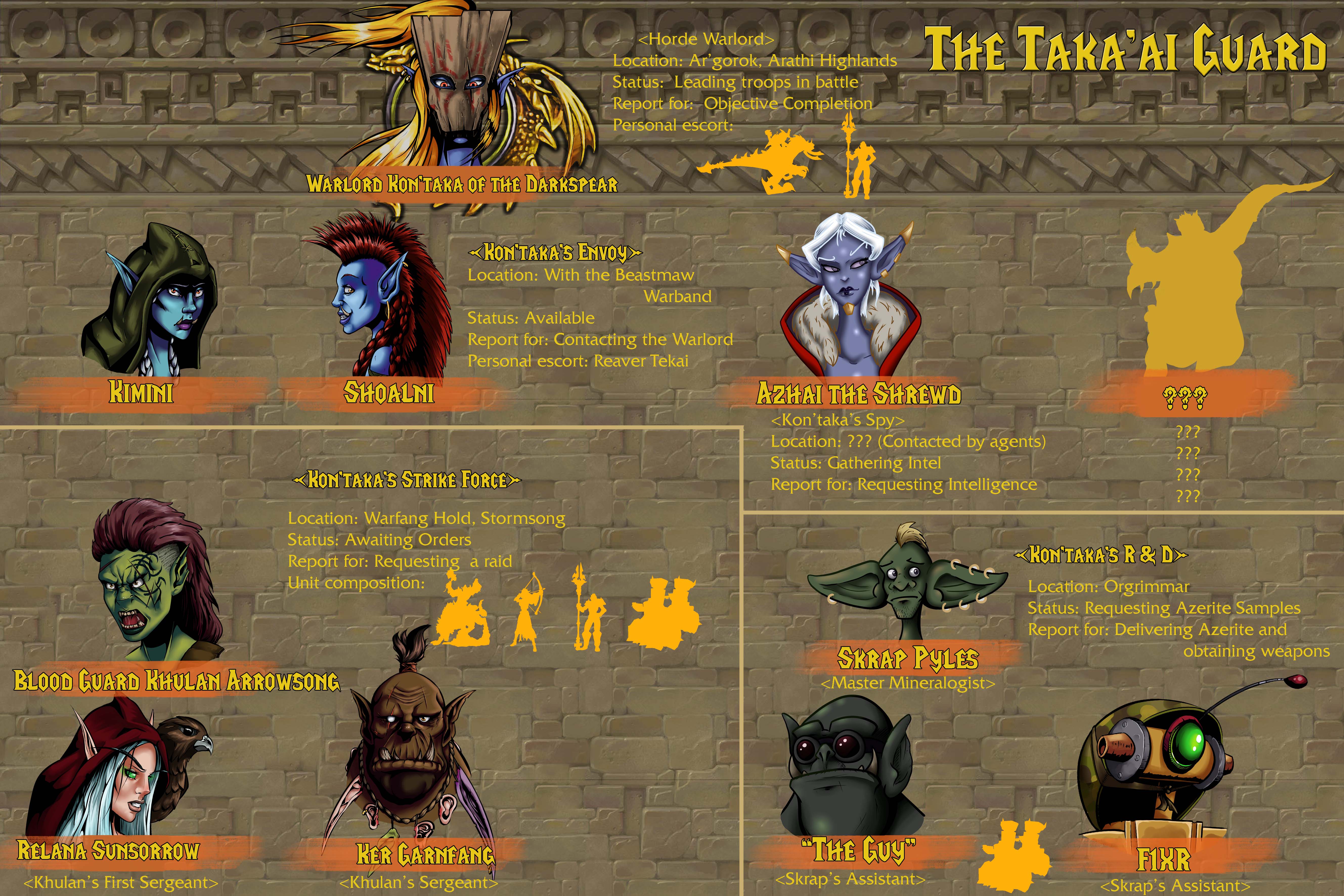 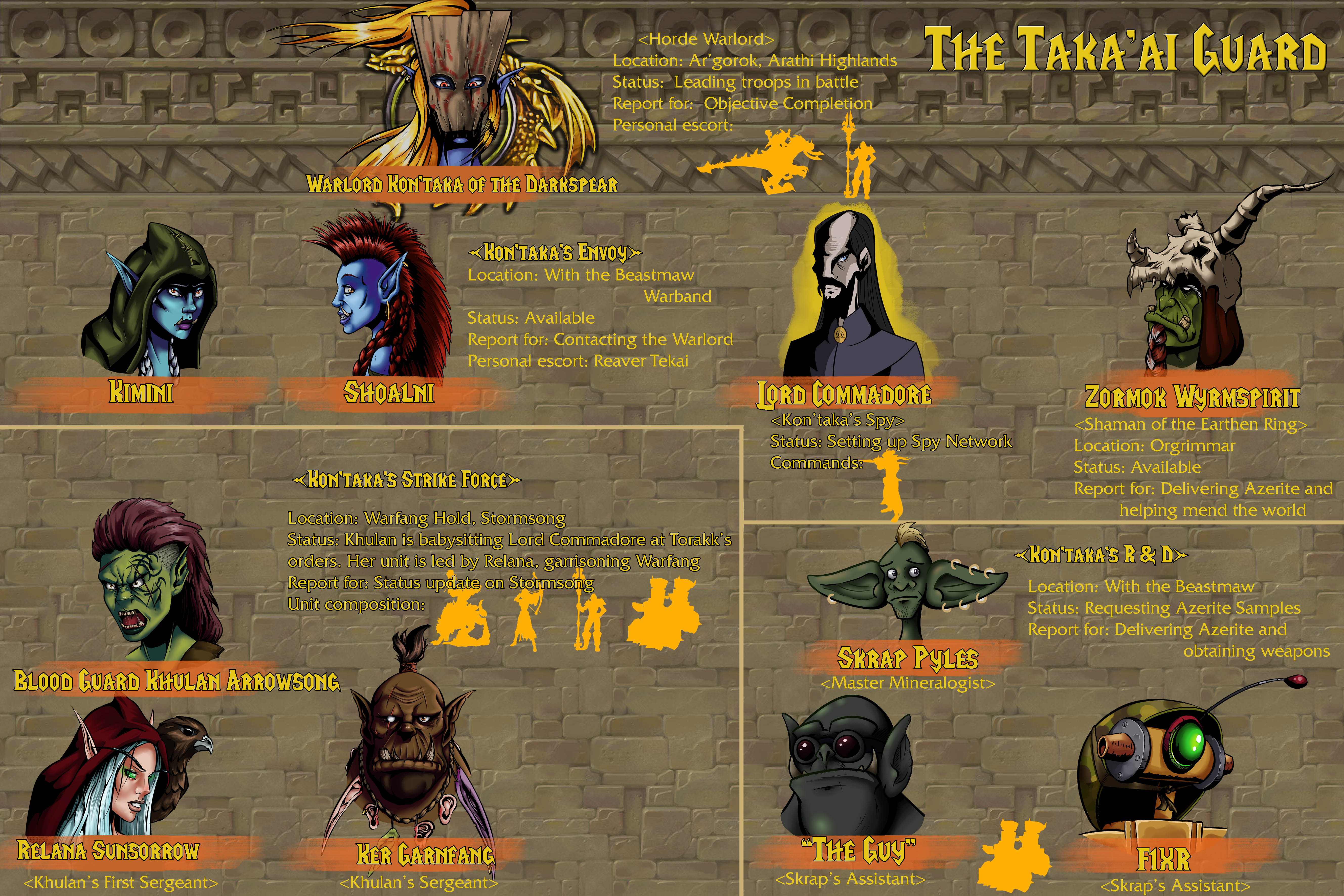 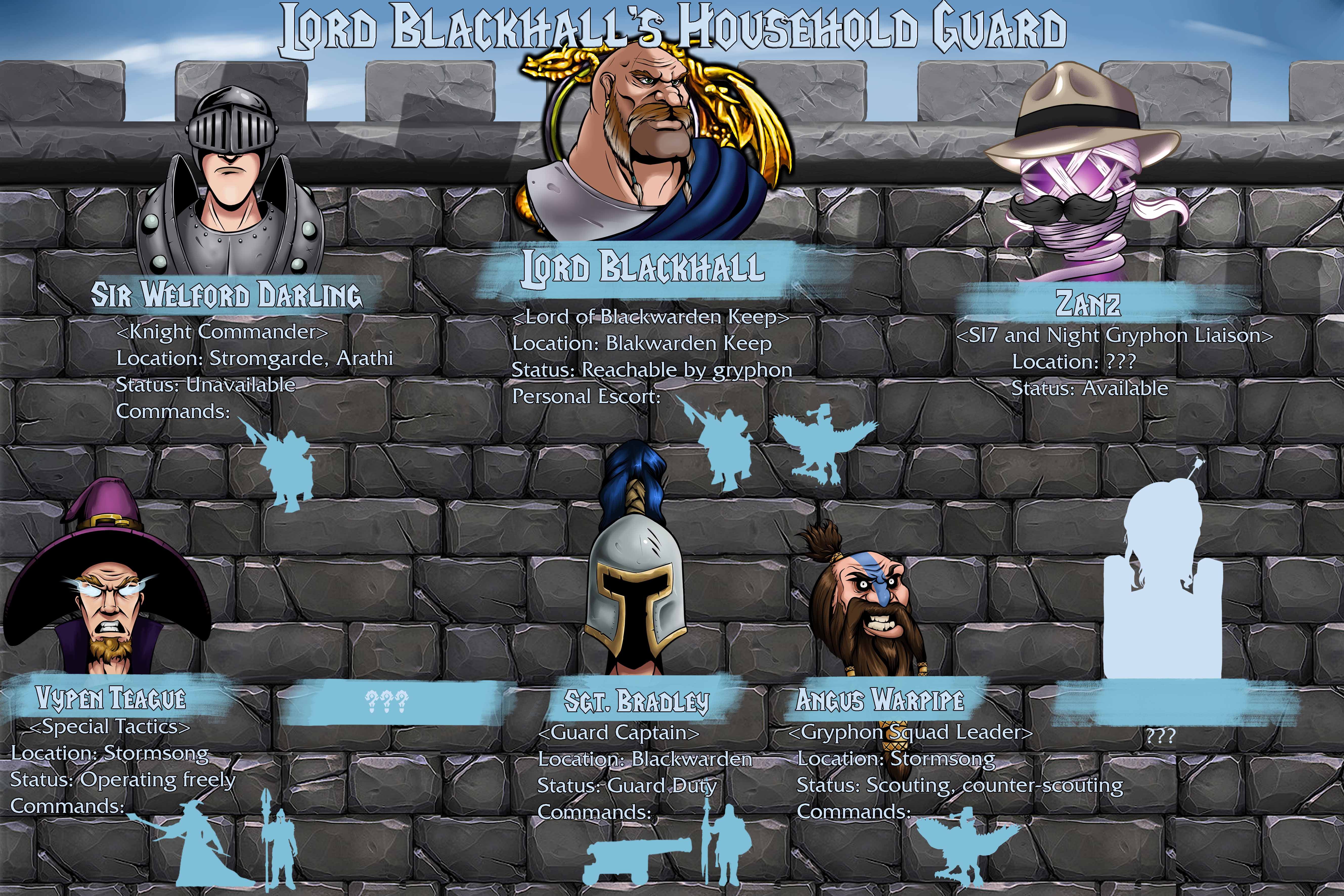 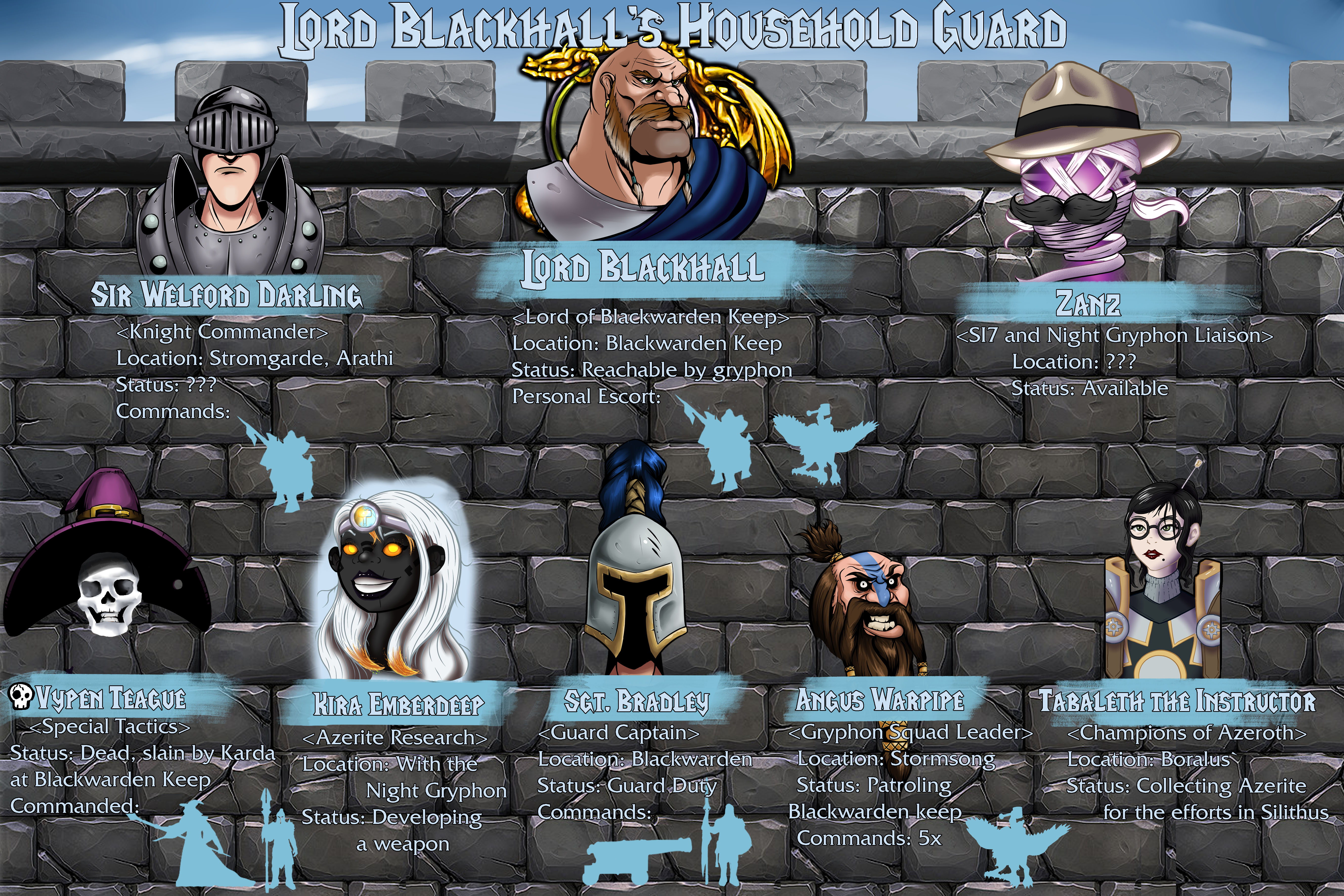 The plot was centered around the Alliance Blackwarden Keep, which looked like this before and after the Horde conquest of it: 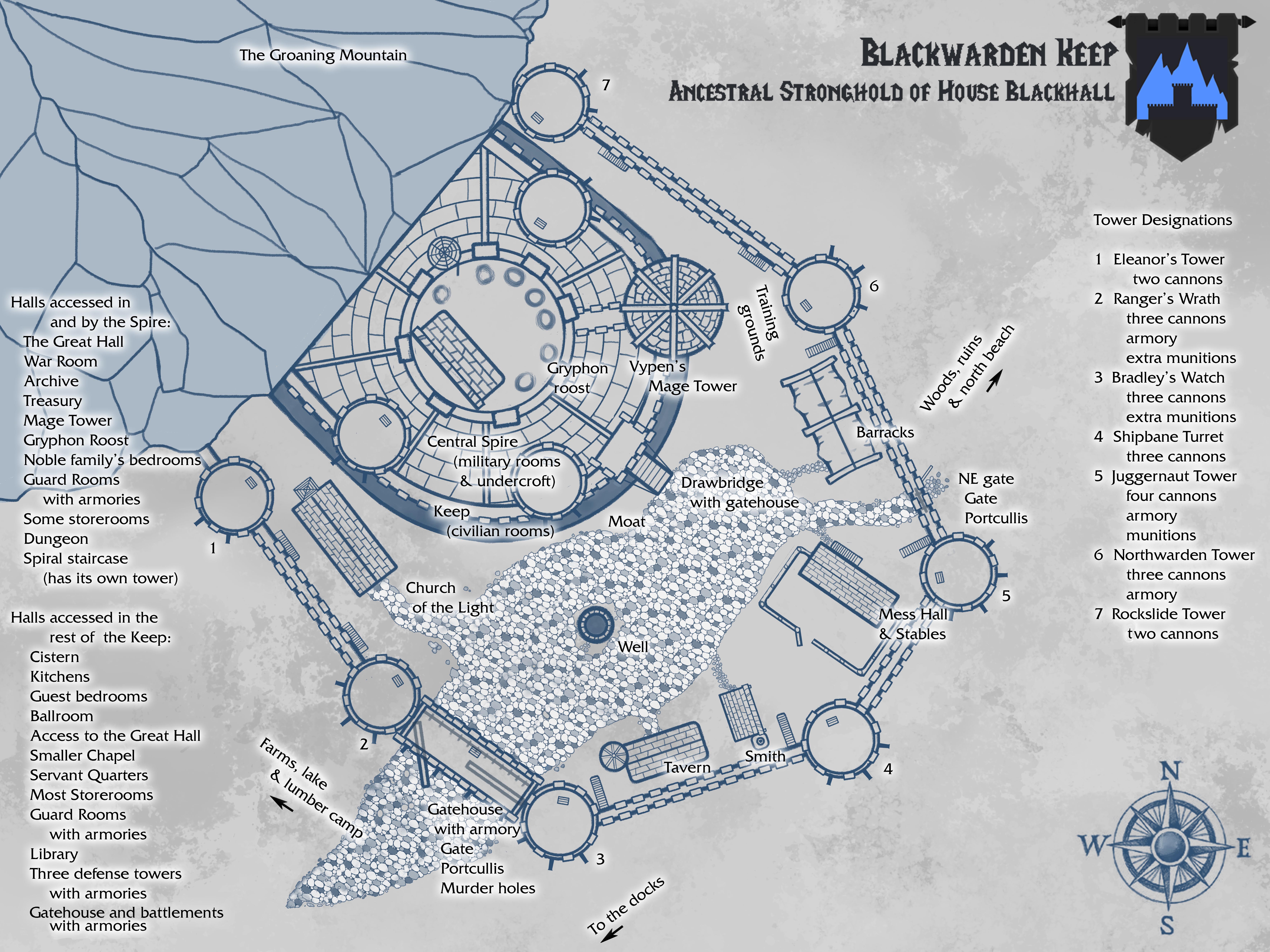 It was located on a small and unimortant made-up island somewhere in the Eastern Kingdoms, which suffered a Void Assault towards the end: 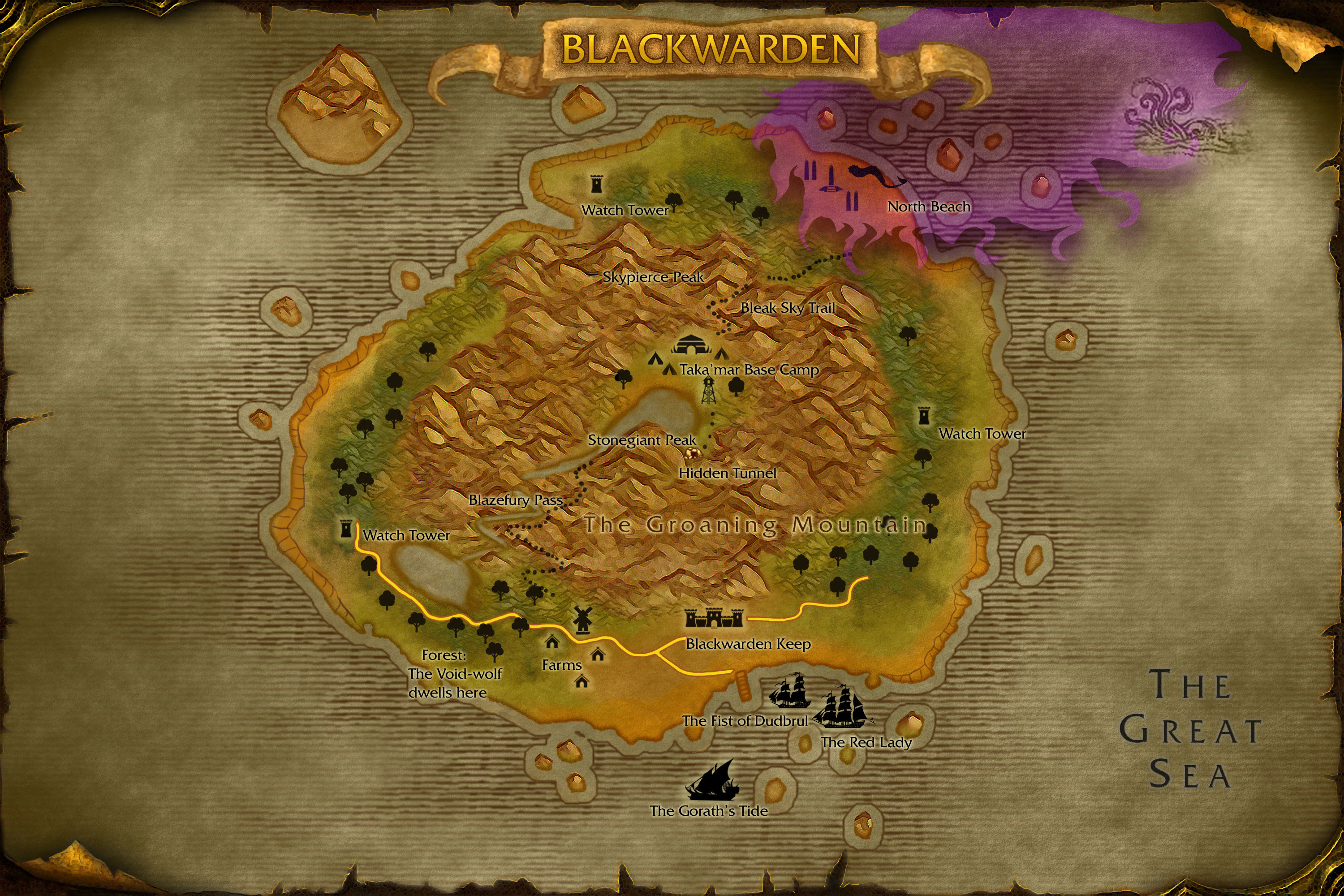 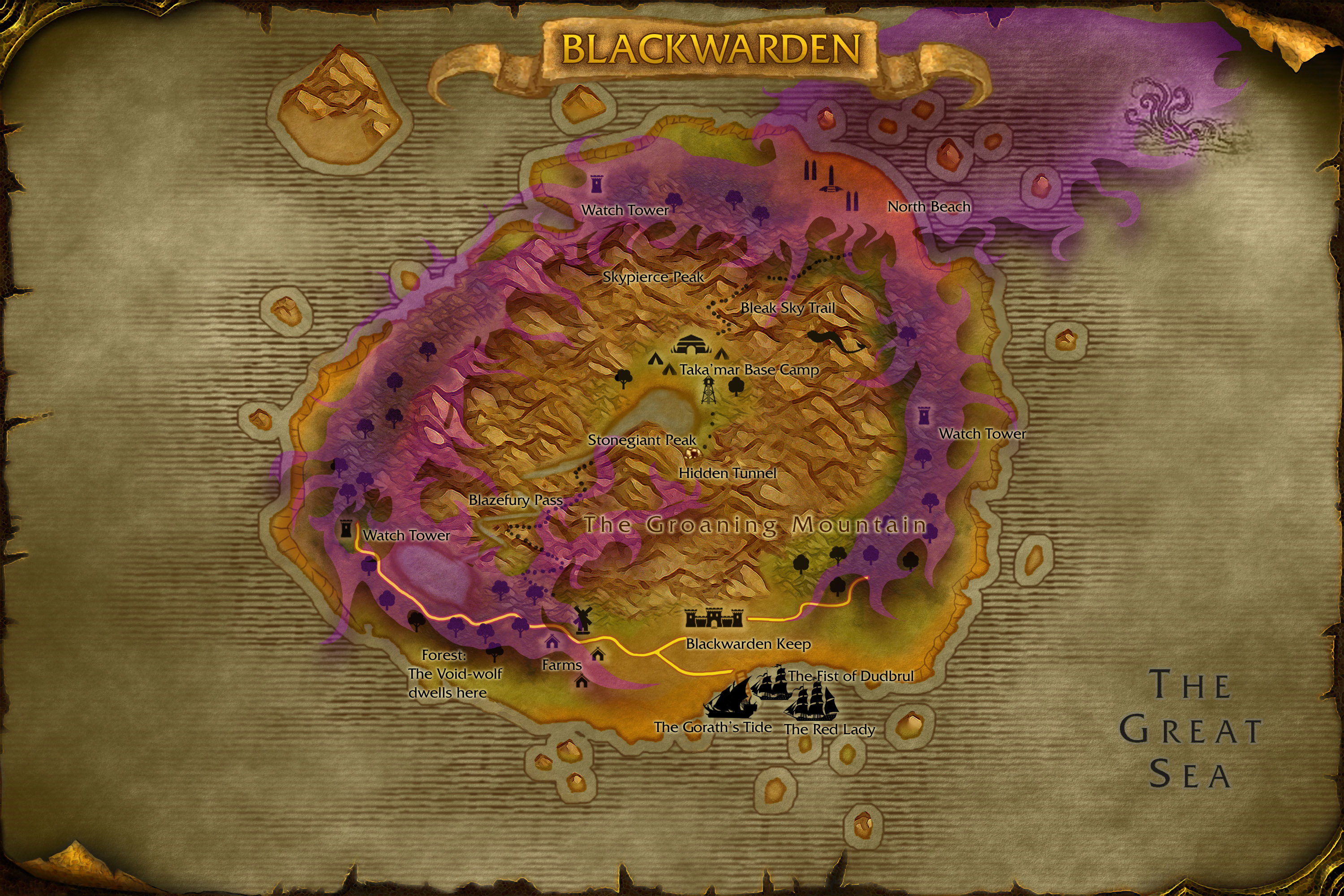 I had the pleasure of briefly participating in part of the Beasties’ storyline and it was awesome, but seeing the full scale of the campaign seriously blew me out of the water. The thought and effort that went into crafting the story and all the additional material is insane.

11/10, awesome stuff from an awesome guild. Can’t want to see the next cool thing the Warband cooks up.

Thanks a lot for the kind words! It was also great RPing with the Hand when we did

Can’t want to see the next cool thing the Warband cooks up.

I love the attention to detail and the addition of the maps as the event unfolds is something that deserves special praise in my opinion! It makes you feel like this is something that could be a series of quests that take place in the game itself.

Huge props to everyone involved!

This was a real fun Campaign! Cant wait to see waht comes in the future for us!

Update! The Beastmaw will be taking it easy for a while in the months leading to the Shadowlands, meaning we’ll mostly do personal adventures rather than big campaigns. Currently on the table: Vrakk’s son has been kidnapped by his evil sister and we have to go get him back!

The question is… did Vrakk get his kid back?

We are slowly trekking across Outland in search of the warlocks who kidnapped Vrakk’s son, but actually not very slowly because these events happen almost back to back IC despite being days apart, it’s been the exciting kind of intense and I’m looking forward to what happens next!

The guild is likely to be a bit difficult to get in touch with IC for a little while, but that’s bound to change with the Shadowlands prepatch.

If we spot any shady warlocks, we’ll signal a void flare for you!

No other guild zugzugs harder than the Beastmaw. Join them for the ultimate dat kind of orc experience.

We have now returned from our sudden, hastily prepared expedition to Outland!

Reaching as far as the Netherstorm, we tracked down the warlocks who had abducted Vrakk’s son Kromash, and unraveled a revenge plot by none other than Xil’nor the Cruel - the last captain of the demonic warhost once led by the Pit Lord Behemagor, which was our objective to eliminate during the Legion’s invasion! With Xil’nor slain, the last remnant of our old hunt has been dealt with.

We are now licking our wounds at the Crossroads.