Is it my macro or is something wrong with wild growth?

Been doing some farming for a cloak on my alliance druid and have run into an issue with wild growth, the cast cancels when the target I have dies?

That’s my macro for the wild growth. 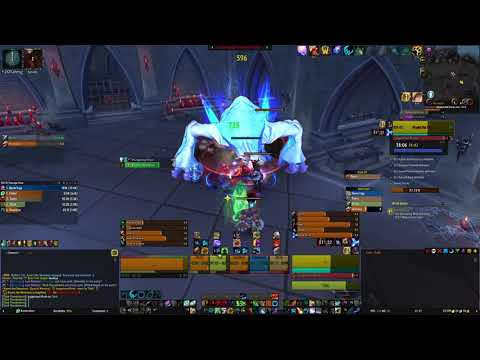 The cast gets cancelled if my target dies? Like, what? It’s a healing spell, why is it being cancelled if a mob dies? Is it how the macro works with WG that’s causing this or is there something wrong with wild growth?

It works without cancelling any other abilities, I’ve just straight up copied macros and just replaced the abilities on them with druid abilities instead of shaman abilities and has never happened on my shaman that a healing spell gets cancelled when a mob I have in target dies, like ever. Doesn’t happen with regrowth either.

Not gonna pretend to know anything about droods or their macros.

Also about your macro.
#showtooltipinfo
/cast [@mouseover,nodead,exists][] Wild Growth
Is the [] necessary?

Yes, unless I’m ok with only being able to cast with mouseover. The way that [] works, I don’t need a mouseover target to cast it, I can have a selected target or no target at all or an enemy in target and it would still cast. If I remove [] I would need to mouseover a target to cast.

You expect to cast a healing spell on a dead target?

I expect it to be cast on me when I have an enemy targetted, just like any other spells cast with this macro if I don’t have a mouseover target. It works just fine if the mob doesn’t die. If the mob dies, the cast gets cancelled, because reasons.

I shouldn’t need to have a friendly target selected for spells not even able to be cast on an enemy to not cancel cast when the mob dies.

Then the [] is wrong, it’s a catchall. Use [@player] instead

Then the [] is wrong, it’s a catchall. Use [@player] instead

But it works for all other abilities I have on the same type of macro in the game? What makes wild growth so special it doesn’t work with it and cancels the cast if I have an enemy in target and it dies?

Wild growth can be casted on enemies. But when the target dies of course it cancels. Afaik it’s the only healing spell that works that way.

Wild growth can be casted on enemies.

Uh, what? Why can it be cast on enemies? It’s a healing ability for friendlies.

It spreads better in some cases, since the boss is obviously in the center of the group.

Oh well, guess I’ll have to redesign the macro then. Weirdest stuff I’ve encountered in WoW, I’ve been using this same macro for ages as a priest and shaman.

If, for whatever reason, you have a friendly target selected you might not want to cast on yourself but on the target instead. Maybe this would help:

I mean it’s sometimes good to cast it on the boss. It’s a 30m radius, and it’s 6 targets, so in m+ it’s almost guaranteed to target the whole party without any loss of healing.

Yes, that works too.

Been doing some farming for a cloak on my alliance druid and have run into an issue with wild growth, the cast cancels when the target I have dies?

Don’t all spells do that?
If your target dies in process, the cast doesn’t change target as far as I know.

They do. The difference is that other healing spells don’t target enemies, Wild Growth is the only one that does afaik.

I just tested it with Holy Light.
It says failed and cancel casts instantly as target dies.
Turns out you’re lying.

How am I lying if that’s exactly what I said?

It could be confusing what exactly u said they do til, i can see how it could be misunderstood at least

made my day, thx