I’m playing a prot warrior and really would like to get into tanking dungeons and eventually raids. How much is it expected that the tank already knows everything about the different fights and maps etc.? Should I go DPS to try learn everything before I can actually start tanking?

Hi, and welcome to Azeroth!

From a look at your armoury, I’m thinking your warrior is also at low level? Are you just starting the game?

The first thing I would mention, before you get too far in, is to consider which realm and faction you want to play on. This is a HUGE decision, and Blizzard give you no help with it, beyond suggesting “New Players” when that doesn’t really make sense any more.

Realm choice is important. You want to be on a realm with a LOT of people of your own faction and almost none of the opposite faction. If I was rolling Alliance these days, I’d start on Silvermoon realm, or Ravencrest. Argent Dawn, maybe, because I like being around RP.

I bookmarked this a while ago, meaning to watch it all before recommending it here. I still haven’t watched it ALL, but I have watched certain segments, and it seems to be pretty solid and up to date as of end of BfA: [World of Warcraft Complete Beginner Guide (Retail)] At 2 and a half hours, it’s an epic, but it is segmented into 38 parts, so you can jump quickly to the areas of interest: Video Start- 0:00 free trial, purchasing the game, rfa & expansions- 1:31 microtransactio…

OK, back to your question.

There are two VERY different situations:

There was a time when learningto tank as you levelled made sense, and was the way to do it. Nowadays, I’m not at all sure about this.

There aee 130 dungeons in the game, 121 of them pre-Shadowlands.

A complete searchable and filterable list of all Dungeons in World of Warcraft: Shadowlands. Always up to date with the latest patch (9.1.0).

There is no possible way for you to learn the ins and outs of 121 dungeons before you even set foot in current content! It would take months of dedicated work, and those 121 are not relevant to the rest of the expansion anyhow. You level far too fast to think of spending time studying Blackrock Caverns or Scarlet Monastery Graveyard.

OK, so you will be visiting only one expansion while levelling, but learning the detail for all the dungeons in an expansion is still a chunk of work.

At level 60, things change. Seriously. People are grinding Shadowlands dungeons day-in, day-out. Again and again and again. They know every mob by its middle name. And so will you after a while. These are worth learning.

There are lots of resources available for learning dungeons. Search YouTube for any dungeon name and “Guide” and you will get a huge list of results.

The biggest problem you will have is that a lot of them cover bosses only, and much of the actual tanking skill and knowledge necessary is in the trash between the bosses, so be sure to search out videos that explain the WHOLE route, and the dangerous non-bosses.

A very important thing, especially for tanks, is to have addons to help you. Have you got into addons yet? If you haven’t, DO. NOW. I don’t want to get into a huge explanation if you already know about it, but they will be VERY IMPORTANT for you.

If you want to know more about addons, please ASK!

Hmm, we haven’t had a beginner’s addons thread here in a LONG time…

If you want an introduction to addons, here’s Hazel. These are from BfA, but most of trhem will not have changed much: 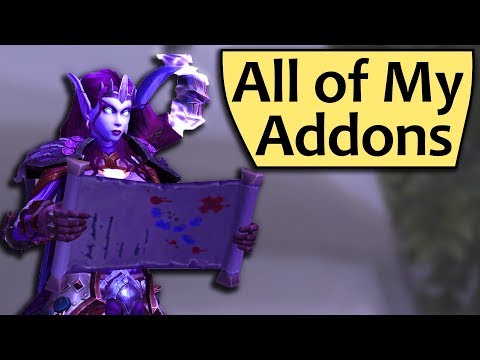 As you go through later expansions, the dungeons get more and more complicated.

By default, you will be levelling through Battle for Azeroth in levels 10-50, and mostly in two dungeons: Atal’dazar and Freehold. Both are pretty complicated. If you intend to tank those

I know this is a longer answer than you expected, but I feel I’ve barely started to mention the most important topics.

Please ask for more information about any part of this!

I got into tanking myself recently and jumped in blind. I only did the SL content, not really into raiding (groups are too big, always someone going afk, blabla, boring) so instead I focus on M+.

The first couple of dungeons I was tanking, people were toxic. I put them on ignore right away and got myself familiar with the pathing/ % thrash required per unique dungeon. Some guys (especially healers) were super friendly in guiding me.

Nowadays I’m running 15-17s with no issues. This char is 4 weeks old. It was a challenge to get started, but I rather PLAY THE GAME, than watch someone else play it to understand what to do and how it works. I suggest you do the same, it’s a fun ride.