Raid System Adjustments in Wrath of the Lich King Classic

Buff “Audit” System
One interesting quirk of the Original Wrath of the Lich King Dual Spec system was that certain buffs could be gained or snapshotted at a larger magnitude in one specialization and then in some situations retained after swapping talents to a second saved spec. While in many cases authentic, this has been pointed out to us as a bug multiple times during Beta and we agree that this undoubtedly would have been something we would have tried to fix in 2009. As a result, we are implementing a system that checks all talents and abilities at certain times and will clear or reduce the magnitude of buffs that either should not be present in your current group, or are too powerful based on your current specialization. This is very complicated under the hood, but the general effect is that players can no longer expect to snapshot more powerful buffs when swapping specs around before an encounter, or retaining buffs that their raid group should otherwise not have access to in its current composition. One specific thing to call out with this fix though is this will not interfere with interactions such as buff “high-fives” that happen when, say, a mage and a priest pass each other on the road and give each other Arcane Intellect and Power Word: Fortitude respectively. Single target buffs that don’t require players to be in a group with each other will be unaffected outside of instances to preserve these uniquely Classic interactions.

Long Cooldowns
One of the more arduous things that we’ve gotten feedback on–and indeed many members of our team experienced ourselves during progression in raids such as Sunwell Plateau–was dealing with long cooldowns on certain abilities after wipes. In situations where a wipe would occur early in a fight such as Mu’ru, many raids would often find themselves waiting around for several minutes for buffs such as Bloodlust or Heroism to come off cooldown so it was available for the next attempt. This didn’t feel particularly engaging and could have a very negative effect on motivation and morale during progression raid nights. In later versions of World of Warcraft, this problem was solved with a system that allows long CDs to refresh after an encounter ends, and while we want to take care about any modern features and systems we include in WoW Classic, we also recognize that there’s very little value in having to wait for multiple minutes after your raid has resurrected, run back, and is fully buffed for an arbitrary cooldown on abilities to be confident that you can perform properly. As a result we are going to be implementing a similar system in Wrath of the Lich King Classic where class abilities with a base cooldown of 2 minutes or more (with some exceptions, such as Reincarnation, Ritual of Doom, Astral Recall, and Lay on Hands) will reset when an encounter ends. This is a fairly big change for Wrath Classic, and we didn’t make it lightly, but the downtime between boss pulls during progression can be significant even without considering cooldowns, so this feels like a solid improvement to overall flow and time management within raids.

Exhaustion/Sated
Along with the adjustment above, we are also going to be implementing a complementary system where the Exhaustion and Sated debuffs caused by Heroism and Bloodlust will persist through death, but then will clear when the encounter ends along with the cooldown on the ability itself. This largely feels like it make sense as part of the adjustment above, and also prevents degenerate behavior where players may intentionally die to clear Exhaustion/Sated and benefit from multiple Heroism or Bloodlust buffs in a single encounter.

We hope you like these adjustments and as always, thank you so much for the feedback you’ve provided on these and other issues during the Wrath of the Lich King Classic Beta!

Wanted to say that downtimes before pull were good to socialize…
But ngl, i think it is good change.

Sounds great to me!

This will basically lead to extreme class stacking for higher end guilds and is a huge nerf for the speedrun meta.
Another thing, will it be possible to reset exhaustion like in retail where someone resets the boss? If so a WOTLK raid will consist of big trash pulls with all CDs, boss reset, boss kill and again.

Sure this is great for any casual player that still wipes in SWP, but for every other player the change in that form will be a huge bummer

This just promotes a bigger GO GO GO attitude which was what ruined the social experience (not RDF).

Honestly how you come up with these ‘ok changes’ and ‘we must destroy changes’ is baffling.

Those are good changes.

If You in casual guild u still gonna raid in casual pace.

Hardcore speed runners would speedrun anyways, GDKP will speed run. Pugs will be rather on casual side.

The cooldown reset needs to be only on boss wipes, not kills. That would change the meta entirely and lead to full class stacks.

The cooldown reset needs to be only on boss wipes, not kills. That would change the meta entirely and lead to full class stacks.

Oh tell me, instead of just fearmongering. Since it sounds like total BS from my experience.

Wait a minute, how does socializing fit into this?

Love me some of that “classic spirit of speedrunning and rushing everything” which pillar is that ?

Please address the Engineering teleporter debuff stacking to increase player model size, ideally by making models standard size. If you consider clearing lusts degenerate this should be much worse. It’s extremely reminiscent of world buff collecting and goblin engis have an inherent disadvantage because their misfire puts a cd on the trinket that gnomish don’t have.

Also regarding the on topic change please limit it to boss WIPES, not KILLS if you really insist on pushing these changes.

gotta love it when the devs can’t skip a chance to insult the ppl paying to play thier game.

And you know that how? It says “When the encounter ENDS” which would include Killing as well.

So, we will be back to degenerate class stacking i.e. full DK stack as they have so many powerful CDs on longer CD. The exhaustion debuff change is OK tho.

Army is not a powerful CD, neither is ERW. Gargoyle+Lust is but other classes have at least adjacent CDs. Either way a really short sighted change that needlessly and hugely impacts class balance.

So, we will be back to degenerate class stacking i.e. full DK stack as they have so many powerful CDs on longer CD. The exhaustion debuff change is OK tho.

I highly doubt we will have anyone class-stacking beyond 3-4. Remember you gotta get gear for them as well. Having 10 dk’s wont do shlt if only caster gear drops.

Besides, you make it sound like EVERYONE is gonna class-stack for every raid. That wont happen. Some people will tryhard and some wont, both of which are completely fine.

With this in effect, speed running guilds will change their roster to include more DK’s since they can 10 min Army + 5 min ERW every boss now.
It is indirectly a balance change buff to certain classes with long cds.
Which indirectly comparatively nerfs classes that had all CD’s avilable for all fights anyway.

This is a fairly big change for Wrath Classic

Yes. Change it to wipes only and it no longer affects class balancing.

So currently these are the spells that WotLK bosses will reset once they’re dead.
Again, it’s a good thing that Army now is included, but as this forum poster here points out, it still affects class balance fundamentally, and many classes are going to be playing in a different way because of this change. 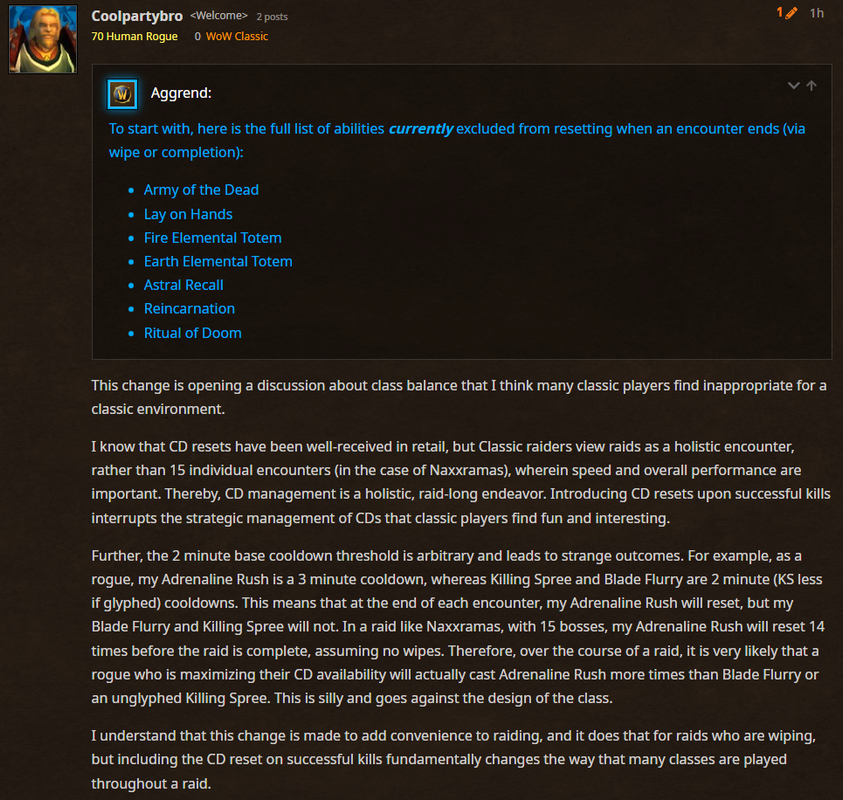 Could it be an idea to only have it affect raid groups that wipe on bosses?
And still have this protection enabled.