Remove prot from arena, continue from topic in 2011

How come prot pala’s can queue for arena?? they have:

You’re in for a treat if you think prot pally is bad. Just wait to you meet a guardian.

95% of the community hate tank speccs in arena.

Not just prot, tanks in general. Guardians, Blood Dks, prot warriors… and from RBG too. They are clearly not tuned for PvP, their entire gameplay is not designed for PvP. It’s PvE gameplay with some PvP talents slapped onto that.

Not just prot, tanks in general. Guardians, Blood Dks, prot warriors… and from RBG too. They are clearly not tuned for PvP, their entire gameplay is not designed for PvP. It’s PvE gameplay with some PvP talents slapped onto that.

That’s because Blizzard isn’t willing to commit to making rated PvP into its own game. They’re stubbornly walking their unique path of half-and-half with both PvE and PvP mixed in, while refusing to commit to either one fully.

For example, the tank role in itself isn’t suited to deathmatch designs like in arena, since it’s a role meant to eat damage and survive it. It’s not meant to deal a ton of damage like a damage dealer, and it isn’t meant to heal through everything as strong as a healer. Yet Blizzard, in their foolish attempt to be “all-inclusive”, slapped on a lot of healing and a lot of damage stuff into the tank designs, just to give them a role in PvP.

So tanks aren’t tanks right now, looking at it purely from a game design theoretical perspective. They’re technically hybrids now, ever since Blizzard decided to slap on all those extras into their designs. There’s no more pure tank. They’re all hybrids. Some more hybrid than the others, but all hybrids nonetheless.
And I do not mean hybrid as the limited definition as WoW players are used to.

For example, a blood DK is a soft-CC:er with a lot of map control, due to their extreme amount of grips (they had an insane amount of grips per minute even before the necrolord ability) together with a noticeable damage output.
A guardian druid is more of a typical hybrid, with a mix between healing, tanking, CC:ing and damaging.
While a prot pala got a lot of healing output, with strong CDs to act as support, and some damage and CC on top of it.
A prot warr, whenever they’re viable, got a lot of damage that usually rivals damage-dealers even. (Not talking about now, but whenever they’re viable then their damage tends to be tuned up quite a lot.)

None of these things should be as strong as they are in PvP. But Blizzard made them strong and turned tanks into something uncharacteristic of tanks, simply to give them a place in deathmatch designed content.
And as Bloodlock said, nobody except for tanks and those playing with tanks, likes it.

slapped on a lot of healing and a lot of damage stuff into the tank designs, just to give them a role in PvP

No those were slapped to make M+ fun and engaging. Which they do, however when this is translated into PvP it becomes frustrating to play against.
CC immunity is nice in M+ because it allows you to avoid certain mechanics. It completely breaks pvp.
And it started happening since Legion. In open world, where no pvp scaling took place, tanks were extremely broken because of that and we still have this issue.
I’m not saying they are unbeatable. You can kill them or CC them or avoid their mechanics. However it’s extremely objoxious and in not very engaging way.
Especially vs tank+healer.
Prot paladins also have the issue that they are defacto healers but with infinite mana because of how the mana mechanics for non healers work.

95% of the community hate tank speccs in arena.

Btw calling it now, playing tank roles will probably be the easiest way to get rating in rated solo shuffles, unless they make some major changes to the way it works (although I doubt they’ll change anything).

No those were slapped to make M+ fun and engaging.

No, to refresh your memory m+ was released at the same time as honor talents. And together with the Legion redesigns, Holinka when talking about the honor talents and tanks specifically, talked about giving them a better defined role in PvP.

So the designs were intentionally done with PvP in mind as well.

And together with the Legion redesigns

That killed pvp as a whole. Just because Holinka said it, it means nothing if we look at what they did with their reworks. A lot of them were not suited for pvp, world pvp was killed entirely and the pvp scaling was just an excuse to make it only good for casual bgs.

I think the part of the problem is back in the day as tank you did 0 dmg and was able to generate a ton of threat.

Then they decided to nerf that to the ground and make tanks do a lot of dmg to generate a lot of threat instead of a passive thing when you hit (dont remember the xpac but I guess it was during wod or maybe legion).

Also à lot of people were complaining that dealing dmg as tank and healer was so low that it wasn’t fun so they probably increased it and then m+ came and they make every healer and tank do a ton of dmg (close to similar as dps).

If they dont allow us to block tanks in our group and continue with healer/dps2 or tank/dps2 Ill just never play it. Playing 3s with no healer is terrible and it just evolves into who has the hybrids on their team.

If they dont allow us to block tanks in our group and continue with healer/dps2 or tank/dps2 Ill just never play it. Playing 3s with no healer is terrible and it just evolves into who has the hybrids on their team.

I ended up with a prot warrior and a blood dk once. I think i define fun differently.

at least let us leave arena without getting deserter when paired with a tank, tank games are absolute dogpoop and blizzard even implementing tank solo shuffles shows some kind of braindamage
whoever thought of that should have to play as a caster in a druidtank v druidtank shuffle… there are

FOUR
PERSONS
NOT HAVING FUN IN THAT ARENA

thanks in advance and **** you to whoever greenlighted that 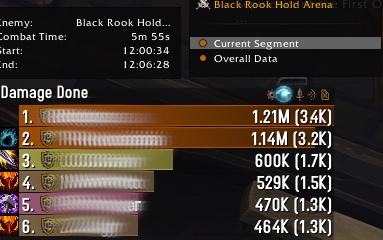 Easily capture screenshots, GIFs, and replays that are ready to share. Download the free app for windows and mac.

oh you’re sure? I guess it’s ok then if you say so
you were probably also sure about arms not needing any nerfs in sl s1
gotta love the zugzug warri brains, must be nice

Hey feel free to quote me my man, I’ll wait on ya here when you find my latest comment stating that