Last week i decided to give hardcore mode a try…for the first time ever.
It took me around around 7 days to level up and get decently geard to be able to reach GR 78 with the wrath of the wastes build.
Since hardcore mode’s death is permanent i decided to go very defensively, even going as far as to use Unity rings.
However…now at GR 78 i can feel that my damage is suffering.
I tried to emulate the top 5 barbarians from the hardcore seasonal leaderboards, with some more defensive items because my paragon level is only at around 560.

I feel very comfortable using this defensive whirlwind rend build, and i am aming for 900k - 1M health.

The only thing i could think of improving is to:
-farm/craft/gamble the same legendary items only in ancient or primal ancient form
-get the istvan swords (by the way my name is also Istvan…its a hungarian name, it means Steven

)
-start with augments (str gems on all items)
-paragon farms

Do you think that building it like this will help me reach GR 100?

Here is the recording to my GR 78 run:
https://www.youtube.com/watch?v=9Owsyht8dZ4

Yes barb is usually a tanky class so i don’t see why not. You are on the right path.

If you want even more toughness you could also replace mantle of channeling with aquila, if you see that you keep your fury close to 100% all the time. Another good choice here is stone gauntlets in the cube, but of course you want to be able to have wrath of the berserker up all the time cause it negates the debuff from the gauntlets.

As for some other remarks, i don’t think that crimson is super essential for this build. You have obsidian ring and that is your tool to reduce the cooldown of the wrath of berserker. And some cooldown reduction in one or two items (like shoulders) should make your life even easier. I would wear 6 pieces of the set instead. That can free up a slot for you rings, and you can go with COE which will help you offensively. More importantly you also get to wear the belt, lamentation or whatever it’s called (i don’t remember lol) which straight up buffs your damage. But if crimson makes the build more swift and fluid for you, go with that, it’s not wrong.

You can also equip bane of the trapped which is the best offensive gem overall in the game. It won’t do any good for your defence but sometimes, being able to one shot everything before it touches you is a good way to stay alive. Bane of the stricken is not really needed unless you push high, and you can also replace bane of the powerfull with esoteric alteration at least for the time being before you become stronger. Needless to say, you also need to level up your taeguk.

Other than that, yeah pretty much everything you mentioned is correct. You need main stat, through paragons and better gear and later you can start augmenting the pieces that you decide to keep. If you feel comfortable farming, let’s say a gr 80, try to lvl up 13 of your gems to that level so you can start throwing augments once you start finding ancient gear.

PS. From personal experience, a good strategy when playing hardcore is to have duplicate items of your build in your stash. Whenever you find two good ancient items, be sure to keep one as a spare. Also it is a good idea, to have a few leveled up gems of ease in your stash. That way, if you ever die, you can start a new character, power level him yourself, equip the spare gear that you have and get him back to business without loosing too much time.

Do you think that building it like this will help me reach GR 100?

Nope. Watched the video.
You realise you don’t have Lamentation equipped or in the Cube.

Also, as for Captain Crimson, it’s not a good idea. The standard 6-piece Wastes setup is much, much tankier. The only reason you go into Capt Crimson territory is when you have 5K+ paragon and you can drop BoM to take CoE instead. By using Capt Crimson and Unity, you’re having to take up two jewellery slots, leaving ORotZ and BoM as the other two. This means you’re missing out on Focus + Restraint, another major source of damage.

Thank you for the reply.

I will farm Lamentation mighty belt as fast as possible.
As for the other ones:
-Captain Crimson 3 piece set reaaaly helps me out with cooldown reduction (i can now maintain wrath 100% of the time), damage and damage reduction.
-Unity is just a strait up 50% damage reduction at the cost of 1 slot. That is huge.

Having Captain Crimson damage reduction, plus unity, plus Wrath 100%…makes for some crazy damage reduction. I was even thinking of changing War Cry with Ignore Pain in case shit hits the fan later down the line.

But you might be right, i may have went a bit overboard with so much defensive items. Ill farm the items you mentioned and give it another try.

I have also now learned about Canai’s Cubes: Reforge Legendary trick, to re-roll the stats of a legendary, or even making it primal legendary. It does cost a lot (50 forgotten souls and 5 bounty mats from all acts…and it is random what you get), but i think it increases my chances of finding the desired stats on a gear if i can’t find the perfect gear drop

Anyway, thank you very much everyone, for all the advice!

As you become stronger, the concept here is that you can slowly take out toughness items and replace them with offensive ones.

To sum up i would do this thing

The nature of this build is to spin and kill everything really fast. Even for a bit higher grs like 90-100 once you find some decent gear it should be basically just hold whirlwind, cast berserker once in a while and nothing can touch you. You obvisouly want to avoid some nasty affixes like molten explosions so having charge instead of ground stomp is easier to play. You get a good mobility that can make you clear GRs faster, you avoid some explosions and traps on the floor and it procs band of might. Merciless assault is a good rune here cause if you charge at a group of enemies basically you can reset the cooldown instantly. I always pick furious charge when i am not pushing. I feel naked without any mobility skill.

In season 23, you will lose the 4th cube item but instead you get some toughness when solo, with the follower buffs. It is not a big deal, but you get a second cheat death proc which is very nice for hardcore so potentially you can screw up 2 times in a row and still not die. Homing pads (shoulders that let you teleport to base uninterrupted) can also be useful in situations where you get surrounded and have no escape. Try to craft a good hellfire amulet with a useful passive and give flavor to your follower. Or you can just keep it like that and let your follower wear the ess of Johan which helps grouping enemies. And ofcourse you should be extra careful with nemesis if it means that 1 more elite pack can put you in danger. My first choice would be the templar follower.

So after a few hours of farming and gambling i have found the Lamentation mighty belt and cubed it.
After that i noticed that at GR 75-85 everything just started to melt super fast.
So i decided to push GR’s up until and including GR 100.

With that being said, i have now finished my second milestone of this season:
-reach and finish on time GR 100 in Hardcore mode.

@Yukos and @Meteorblade
Thank you for your advice, it reaaly helped.

Here is the recording of the GR 100 in Hardcore mode:
https://www.youtube.com/watch?v=Nscy8IRoXV8

Thank you again for all the help!
Next season i will try to be on the leaderboards…even if its in the 1000th place.

You’re not using Ground Stomp enough, which means on multiple occasions you let the effect from Band of Might drop. That’s an 80% damage mitigation which, whilst dangerous in softcore, is asking for death in hardcore. The buff lasts 8 seconds, the cooldown is 6, keep it up at all times.

Around 2 min 40 sec, Battle Rage drops. Around 2 min 50 sec, War Cry drops. You don’t re-cast them until 2 min 55 sec. These are long duration buffs, these should also be up 100%. On that note, you have Battle Rage set to Swords to Ploughshares, and Whirlwind set to Blood Funnel, both of which are healing. You should only need the WW rune, which means you could switch Battle Rage over to Into The Fray, for a massive damage boost in density.

Also, unless I missed it, you didn’t cast a single manual Rend the entire run. This is a nuance that becomes more and more important the higher you go. Rends which are auto-applied by Ambo’s Pride do not benefit from Area Damage. However, manually applied Rends do. So, when you have high density, just after you’ve Ground Stomp’d mobs into a pack around you, manually apply Rends (during the Physical cycle of CoE if applicable, inside the circle from an Oculus Ring if available) whilst spinning. This will melt trash packs, especially so if you have high area damage.

Well done, though. It’s a nice clear. You’re showing good awareness of ground effects, using Stomp to re-position stuff out of poison, good laser avoidance, and so on. Next on your list, if you’re interested in practising, is to drop War Cry and get Ancient Spear / Rage Flip into there so you can practice how to move large amounts of mobs around the map so that when you find a good pylon (conduit or power) you can have huge amounts of mobs near it, in density, to take advantage of it.

As for next season, if it took you just a week to get to a GR100 HC, you’ll absolutely be on the top 1000 leaderboard that early.

If you want to see some spearing in action, hit me up on softcore and I’d be more than happy to demonstrate.

Nice to see you progressing!!!

Rule of thumb, for whatever build you are playing: You never want to take out any items that buff your main damaging skill, be it rings, belts, weapons, offhands… These have to be either equiped or cubed pretty much always. I 've done the same mistake in the past with a tempest monk and i regreted it later. Always remember that dealing high damage means you kill everything faster, hence you have a smaller chance to die if nothing can stay alive from your attacks. If you are playing casually with this build and farm average tier grs for gem upgrades and loot, there is no way that you are going to die unless your phone rings and you leave your game unpaused surrounded by 60 enemies. And it’s a good thing you have nerves of steel passive. Never leave town without it on hardcore. As Meteor said, be sure to always have band of might proced. 80% dmg reduction (5 times more toughness in other words)… That’s not something you want to ignore. Also if you decide to keep unity, be sure to remove it if you ever play in groups. It has no effect if no one else is wearing it and you don’t want to rely on something that doesn’t exist. Even more, it can make things worse if someone else has forgotten to unequip it you could accidentally kill him or he could accidentally kill you if one of you is start taking big chunks of damage. I 've lost a hc character because of that in the past.

You might find this useful for when Season 23 starts… 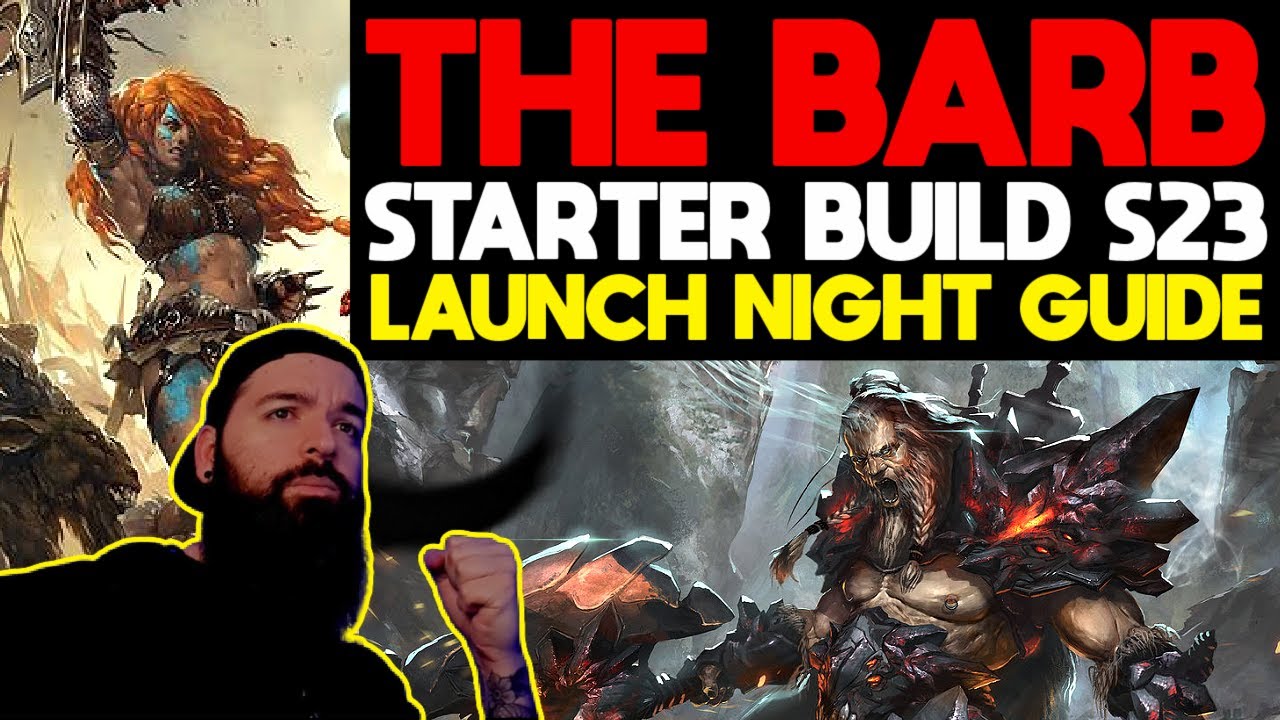