I guess I’m just looking at the wrong chart. According to this damage sheet, Attack speed will increase the damage over Area damage.
Can someone explain what is right and wrong about this.
If you follow any other guide out there, the right stats should be area damage and not attack speed

I don’t think Area Damage is considered in the chart at all. If you roll VIT, e. g., to AD, the chart won’t change.

AD depends on the number of enemies surrounding the target you hit. It is difficult to give you an estimation.

Right. So it’s not possible to calculate the loss of damage, going from 20 AD to 7 AS?
Would be interesting to know these figures when it comes to priority damage >< Survivabilty

D3Planner has the option to simulate the damage you’d be likely to do, and that includes the number of elite mobs / white mobs you’re fighting, and from what distance. So, you could simulate yourself in a fight against 3 elites and 25 white mobs like so… 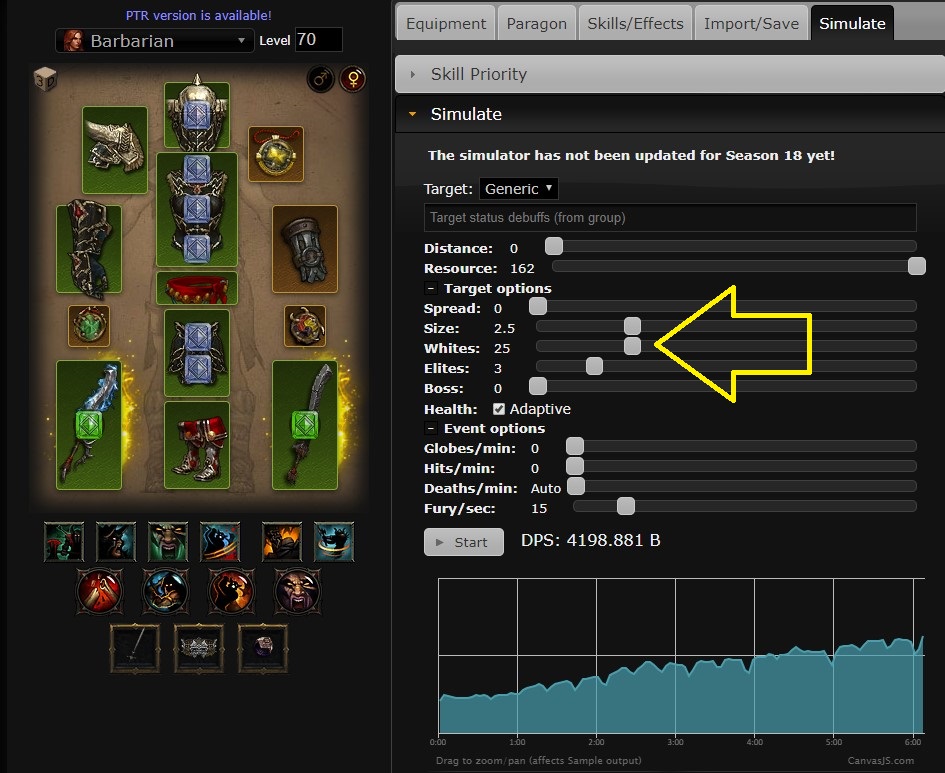 Then, make some changes to your gear’s affixes on the site, e.g. change some AS to AD, and re-run the simulator.

It’s never likely to be as simple as AD > AS (or vice versa) because which is more advantageous for your hero will be determined by its current stats. For example, a small increase in AS might not be beneficial unless if causes you to reach a new breakpoint. So, if AS doesn’t get you a breakpoint, AD is better but if the AS gets you to a new breakpoint, AS might be better.

The simulator gives you a chance to play about with this stuff before you make expensive re-rolls at the Mystic in-game.

That worked very well and it shows how AD outdamage AS when fight mobs within the 10 yards.
Damage difference is much less notable when fighting a boss i.e.

One thing that’s special about IK/HOTA is that you may also get a lot more bang for your buck by putting in CHD rather than CHC, due to the mechanics of how HOTA works, i.e. it gains 1% CHC for every 5 Fury that you have. Assuming 800+ paragon, you’ll have CHC from paragon, the natural base CHC for a level 70 hero, 3% CHC from Battle Rage, 10% from Wrath of the Berserker, assuming full fury (100 base, 50 from paragon, 12 from mighty belt) that’s another 32%, that’s already at least 50% CHC. Don’t just play around with AD vs AS in the simulator, see what you can do by playing around with your CHC vs CHD too. (This is why it’s acceptable to take 15% HOTA on helm rather than 6% CHC if you can’t have both).