So we’re going with story team malice above incompetence, eh?

According to an old interview of Bellular to Ion during the Shadowlands pre-patch, the First ones aren’t even the supreme beings and creators, there’s a higher God/entity who created them and set all the rules and driving forces of the Warcraft universe, that the First Ones had to work with and create worlds and stuff with.

And the name of this supreme God is “the Clockmaker”.

(as you can see from the name it’s someone/something STILL related to machines like clocks and printers, but Ion also said the Clockmaker won’t be revealed during Shadowlands at all but later)

Sure it will, then they will come up with an even brighter idea, truly a genius move that nobody will have anticipated : who created the Clockmaker ?

From now on, unless they finally get their stuff together, they can only go higher in the cosmology. That’s a dead end.

So destroying all existing afterlife lore wasn’t enough? They want to destroy all creation lore as well?
They’re crashing the lore with no survivors.

They already did so with SL.
They made the description in Chronicles invalid.

The sheer audacity to claim that Shadowlands’ story "pulls together threads that started in warcraft 3 " lol.
If you give a crap about the warcraft lore and universe and just want to do your own, totally different thing, at least be honest about it.

Exactly. So much this. It’s insanely dishonest. They want to make their own thing, but don’t even seem to know what it should be.
It has no connection to WC3.
WoW pretty much murdered the Warcraft lore.

Btw. since everyone and wowhead’s mother is sure that “coming for the soul of Azeroth” is still gonnna be a plot point in 9.2… does that change anything for you? If the reordering of the world has some Azerite and World Soul connection?

For me it doesn’t, but I guess it would make it more azerothian…

I just watched a Bellular video that I found kinda intriguing. Not sure why, considering my stance on that cosmic stuff, but I guess it felt like it made some sense. 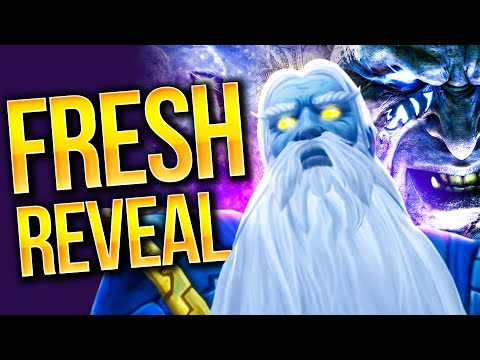 In it he discusses the idea that “The First Ones”, are essentially the supreme beings of Order, and that Order pretty much won the first or at least the last round of struggles between the cosmic forces. And it kind of makes sense. The First Ones don’t just use a style that reminds us of the Titans, they also seem to have been obsessed with imposing an order on the world, forcibly creating what was needed to keep the system relatively stable, including ruling and policing forces like pantheons here and there.

And I have to say… that kind of makes the whole concept a bit easier to swallow for me. Why are there 3D printers to create and order the forces? Because the ultimate beings of Order created the system, of course it would be machinistic wherever it could be. We aren’t visiting the centers of creation, we are visiting the centers of reordering. And if it feels strange and alienating… it probably should. The idea would be to create the feeling that there is something wrong with the universe, if the computers are calling the shots. And the First Ones aren’t the ultimate gods, they are just the dominant gods right now. There are equally powerful forces out there that would gladly in-universe retcon pretty much everything we saw in the Chronicles.

I’m not saying that that is a great world-building idea, or that I like it… but I would at least understand how a dev might think that could be a cool concept.

Yes it makes sense, And thing about void they see all possible outcomes, they know they will win at the end, Void is entropy, absence of energy, matter, reality etc. It is basicaly 100% that at some point void will consume everything and there will be nothing again, Cycle will repeat.

Meh as most Bellular lore takes I didn’t like it. Don’t know what else to say really. Didn’t change anything at all for me.

It certainly doesn’t change the fact that we are moving away from the affairs of Azeroth being our important focal point. And immersion obviously isn’t a priority here. It indeed doesn’t change my criticisms from the starting post one bit.

But as an explanation of how the devs could ever have thought shis might be a cool idea? Yeah, it makes enough sense to me. And I personally feel better having a believable explanation for why they are mucking things up than just being baffled by their decicions. So that’s the way in which the idea Belluar presents is helpful to me.

I don’t think there could be any theory that actaully makes the decisions made seem like a good idea, so that’s not something I would expect from it, and that’s not the theory-makers fault. That’s still on Blizzard.