the hype is dead for me already. I guess it is time to get some other race more customizations

I cannot shake the feeling that something is missing?

I think so too. I expected a glowing hands option for Nightorne.

So far I am amazed by the changes they have done.

The Nightborne weapons being added is just amazing, finally can be the spellbreaker I always dreamt of.

Like others have asked for, please give all races shared hairstyles.

I’ve seen lots of posts with great ideas so I’d like to help raise the Nightborne voices too!

While the new options in the PTR are nice, I expected so much better.

DEAR BLIZZARD, PLEASE ACT ON OUR FEEDBACK BEFORE YOU RELEASE THE PATCH. YOU PROMISED YOU’LL LISTEN!

Also, thanks so much @Linxy!

Would love to see this someday

All Chars in general:

I am sure there will be more ideas comeing to my head as I play around with it more.
I love the lightforged options so far
I actually consider now to even play a nightborne male, the faces are not yet completely ok, prolly a bug (sort of snarly looking) but it is definitely far better than before.

will update as I go…

I was thinking “7of9 eye brows” when I first saw the jewelry options /jaw options…, can we get it ? without the eyebrows obscuring it I mean. like a no eyebrow option ?

Ooh that’s a neat idea!
I guess they could add it as a Face Jewelry option and a No Eyebrows option.

I would love to see it in PTR

I just wanted to add my thoughts to the official forums, most of this is things I’ve wrote on MMO-Champion but I’d like add it here with how vocal CMs are being. It’s mainly Void Elf related but I’ll add a few additional notes below:

Entropic Embrace (Racial)
I really like the idea of a Glyph or an NPC in Telogrus Rift to change the Racial visually, my personal opinion is that because it only affects the base model (no 3D parts) it looks badly implemented compared to everything changing. The effects of Memento of Angerboda (https://www.wowhead.com/item=133644/…da#screenshots) look much better as it also affects 3D pieces.

Hairstyles
I’ve had a mess around on the PTR and I really like the hair colours and ear lengths for Void Elves, the shorter ear make the shorter hair styles look better. The white, black and brown hair colours are not in yet but it’s really nice to see the blonde/white blonde with normal skin. I don’t see many people using tentacles on the lighter hair colours, it looks pretty terrible !

On the downside removing tentacles makes some of the hairstyles look even worse than they already did, especially the Transience and Sorrow for Males and Consuming for Females. This is much less noticeable on the Female one than the Male ones which look like they’re half a hairstyle. I would also like to add that Suffusion still looks poor no matter how it’s used.

I still want to see more hairstyles, essentially ones which give the Void Elves a more elegant option than most which look like they forgot to care about personal hygiene when they left Quel’thalas. There are some interesting options at the start of this thread (https://www.mmo-champion.com/threads/2382861-Official-High-Elf-Discussion-Megathread) and you give the options to Blood Elves as well as the OG race.

Eye/Skin Colour
Yes I know, we’ve been down this road before but I have a few final requests. For both Void and Blood, a blue eyes option similar to the purple one with a white sclera, I think this looks much better than the full blue we have currently. And for Blood Elves, give them a Dark Ranger pale skin and red eyes. Why not?

Accessories
This is another one I think that would be really nice to add which is feathers/plumes similar to the Dwarves as it would help reinforce the High Elf theme. I also really think Body/Face paint/tattoos would add a new dimension to Elves in the same way it has for other races, such as Dwarves, Tauren, Orcs and Trolls. Again, the first page demonstrates this really well. For Blood Elves as well, Runic Tattoos. It feels somewhat criminal for Blood Elves to still not have Runic Tattoos when they were show on the Box Art for TBC.

Nightborne
On a separate note I’m really happy with the additional Nightborne options, they add a lot of variety and I think the facial/chin jewelry makes them really unique and the option of eyes bring them much closer to their original Legion models. With regards to the Body and Face Tattoos an option to make them more visible would be really nice in addition to their current reflective style.

In terms of other requests I think glowing hands is a very nice option, along with eye colours. I’ve seen on Twitter edits with Purple and Green eyes and this would be nice theme to add alongside the White affecting Tattoos and Glowing Hands.

Conclusion
In addition there’s a lot more for Lightforged Draenei, however as my passion is more Void Elves and a soft spot for Nightborne I’ll leave that feedback for those who care more about our light infused space goats

Overall I feel these are significant steps towards the future of WoW Customization and I’m happy that things are being brought forward.

Very good Sum up, thanks for the input guys, I am loving it so far. (Old lurker here)

Gotta say… the most important things have already been said, but Mana hair and hands is something I would love to see as it realy defines them and seperates them from the Night elves.

With that said I would like to add some feedback/suggestion. While looking at the hairstyles I was dissappointed to not see the 2 iconic hairstyles the Nightborne nps have. It’s about 1 for female and 1 for male.

Some of the proportions for the male model would need a second look imo.

Final thing would be the eyes still, I love the new ones, but could we have a third one that narrows it a bit more? npcs eyes are still more narrow then what we got. Making it a third option would be welcome change so people who like this one, don’t have to worry it’s replaced for example. Just made this on the ptr for reference. 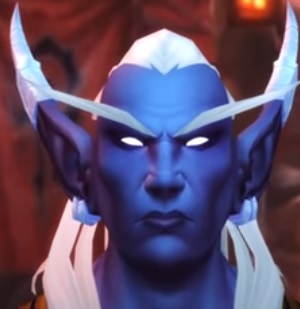 Some one added the npc eyes on the actual nightborne model.

Thanks so far for the Nightborne update and hopefully we could see these things happening. If you guys make it happen I would say that you have succesfully updated the Nightborne to make them more like their originals and a lot more people will play them will bet on that.

I love new skintones, new eyes, hairstyles, hair colors and jewelry. She is almost perfect. Almost! If only I could get these little arcane things I mentioned earlier!
Do it, and I’ll be the most satisfied happy customer.

She is so cute

if this is a bug

A bug inherited from our Night elf cousins, please report a bug so it does not go live like that

A bug inherited from our Night elf cousins, please report a bug so it does not go live like that 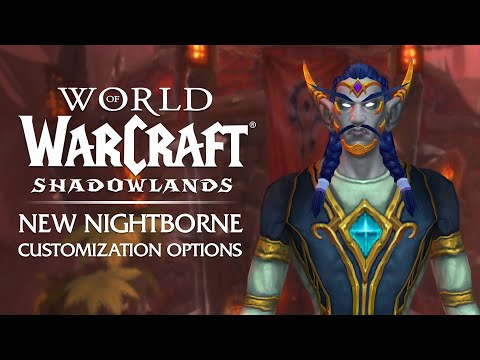 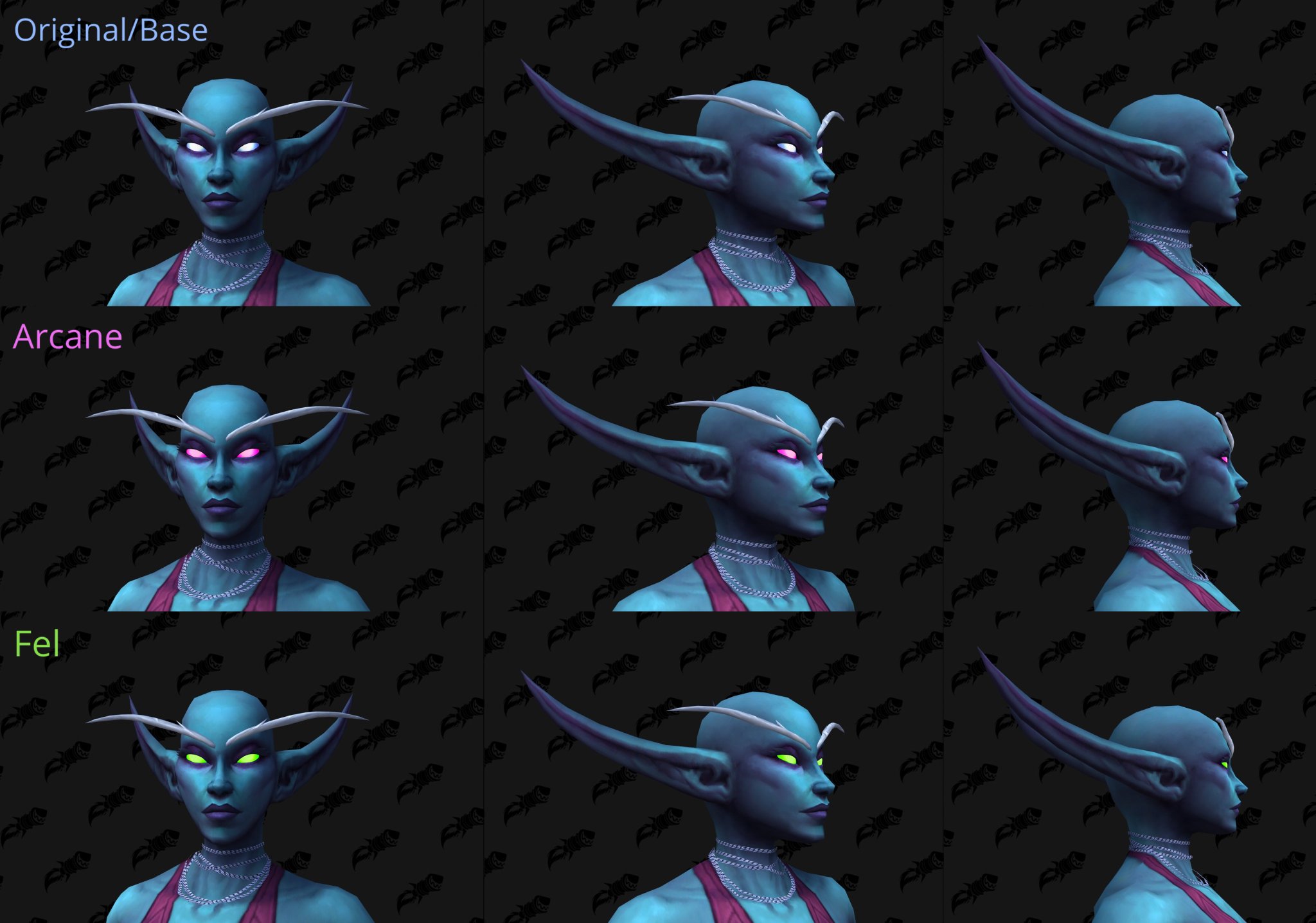 @Nise_Loftsteinn
All the new nightborne customizations 😭😭😭Such big happy tears finally... But BLIZZARD PLEASE, I'M BEGGING YOU. CONSIDER THIS @Wowhead @Warcraft @Blizzard_Ent It's not a big deal but makes our day complete, just like void elves have normal eyes and void ones ;-;
7 Likes
Brady-archimonde September 3, 2021, 9:01pm #1124

She is cute but there is much better !

Congratulations to high elf enjoyers!
Still, my heart is in the night

Like many others have said, the new customisation is amazing and really helps bring home the look and feel of the Nightborne closer to how they were originally envisioned in Legion. Combined with the ‘heritage’ weapons being available on the time-walking vendor, we’ve been pretty lucky. There’s just a few things more that can tip the quality into perfection.

The jewellery is by far the most impressive and varied addition. With an addition of bronze and the dull greeny-silver colour used by some NPCs to accompany the new gold and silver colours, this would fully complete the metallic vibe nightborne have. (Top two below) 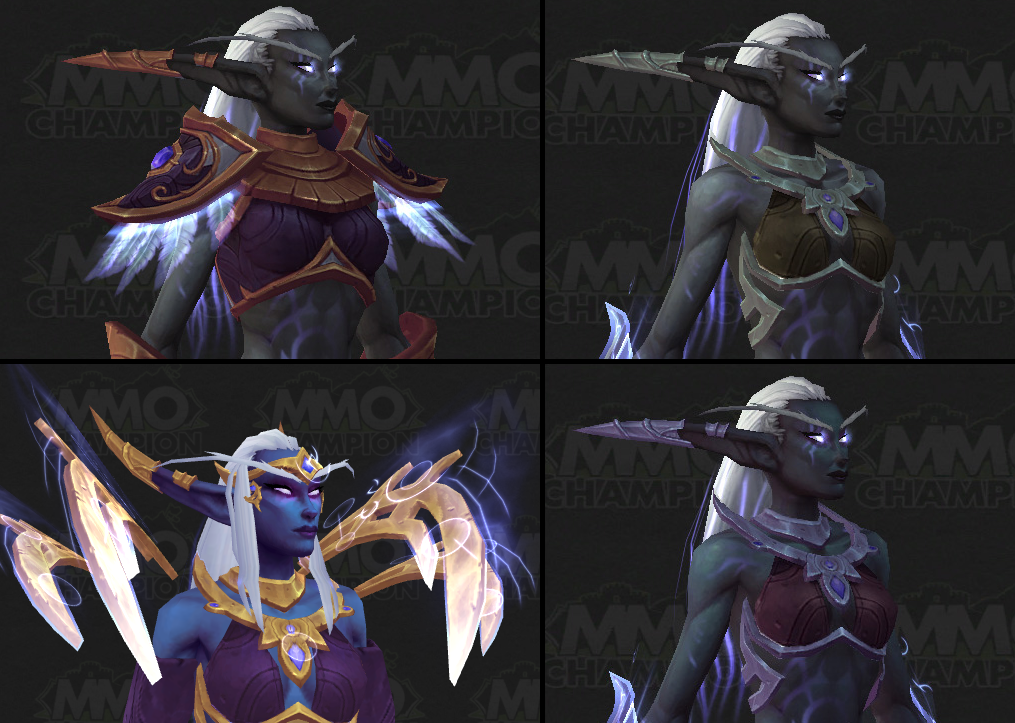 More importantly to nightborne, however, is their magical side. Unlike the NPCs, players have almost zero options regarding such; lacking the magical hands, mana-infused hair and glowing tattoos that can be found on various nightborne mobs. Despite the new tattoos looking brilliant, they are hard to see without correct lighting – something that could be amended by having a toggle for the luminosity of their glow, from its current dimness to a more vibrant purple or blue. As for the magical hair, something like the Dark Iron and their fiery highlights would work wonderfully. 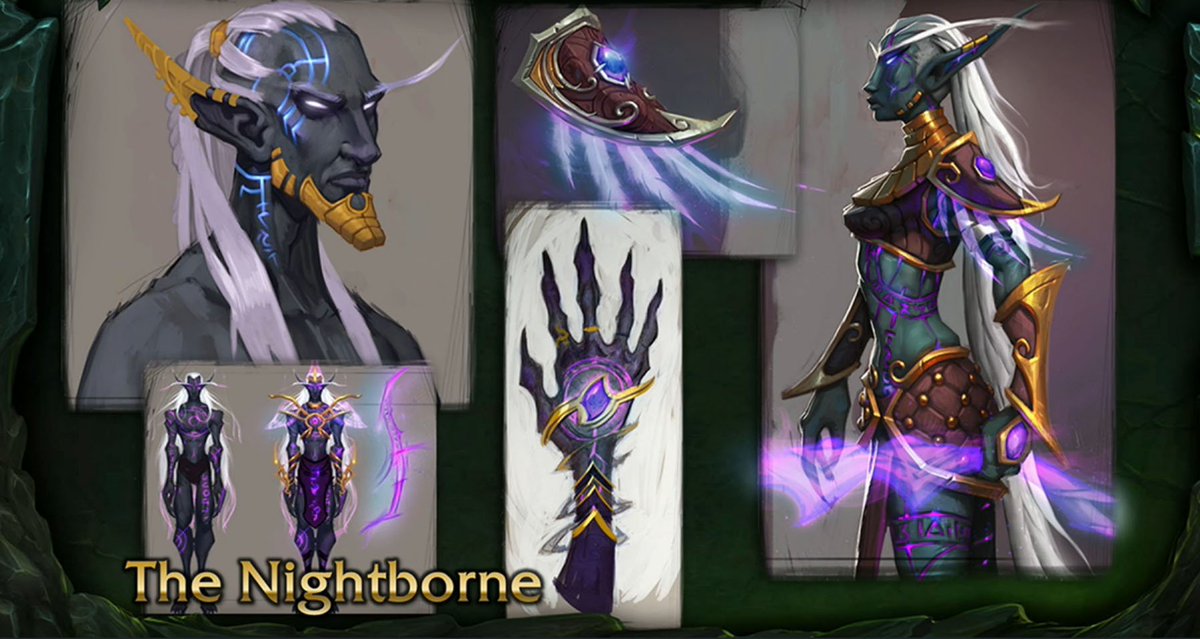 Finally for raw customisation is eye colour. We are still stuck with just one option, even lacking the purple tint that almost every nightborne bar the felborne have – I’m pretty sure we had this tint at one point, but lost it in an update.

Less to do with the imminent customisation is changes to their heritage armour. Of-course there’s the secondary heritage armour variation in gold and red just sitting around in the files, which we would all love to see. (Especially now that we have golden jewellery to match it!) 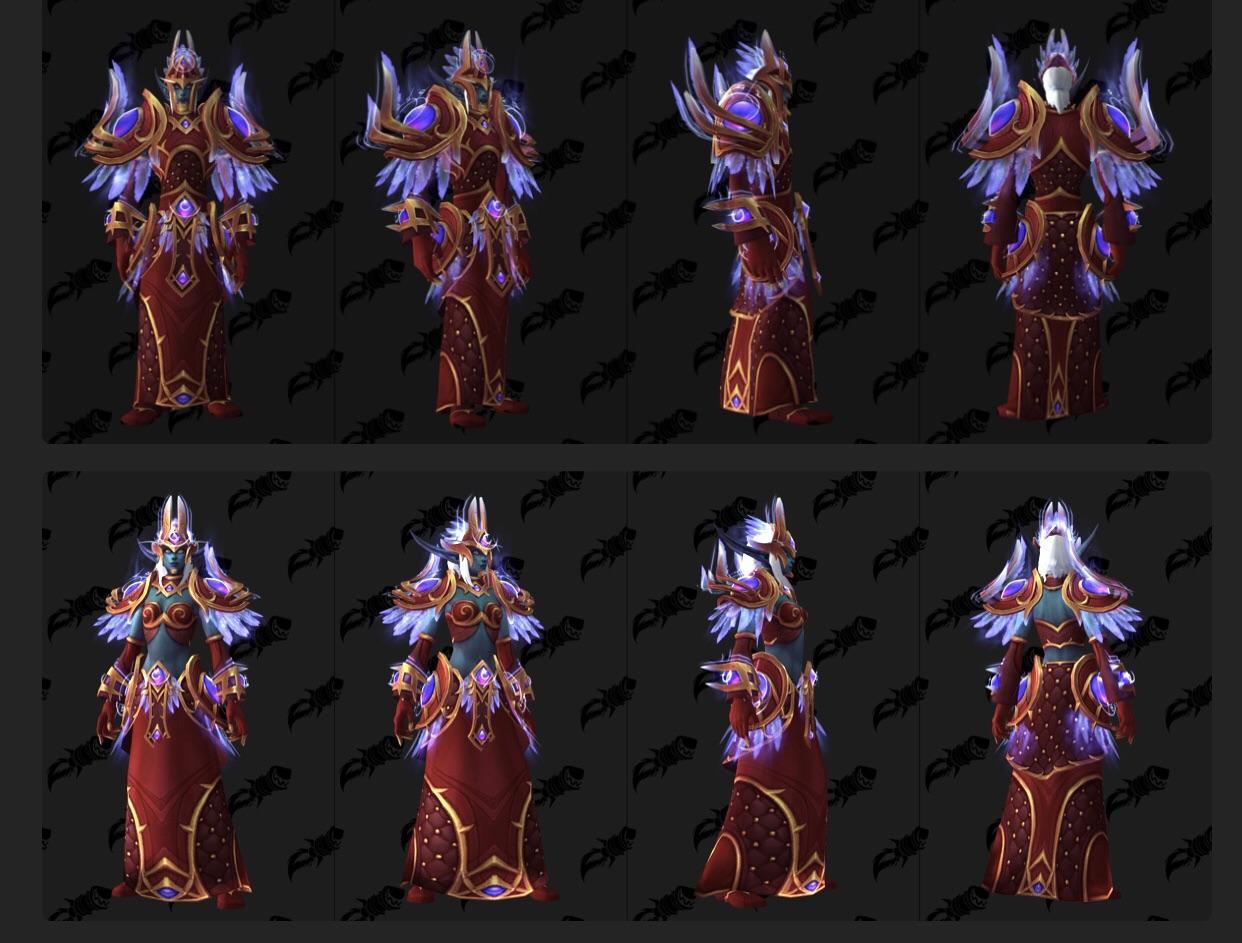 In a more involved manner, there are several fixes that can be made to the heritage armour as it is. As already posted here, the male chest-piece could use an exposed chest to show off the tattoos beneath – but there’s also quite a large flaw in using the heritage pieces for transmog that this picture adequately shows: 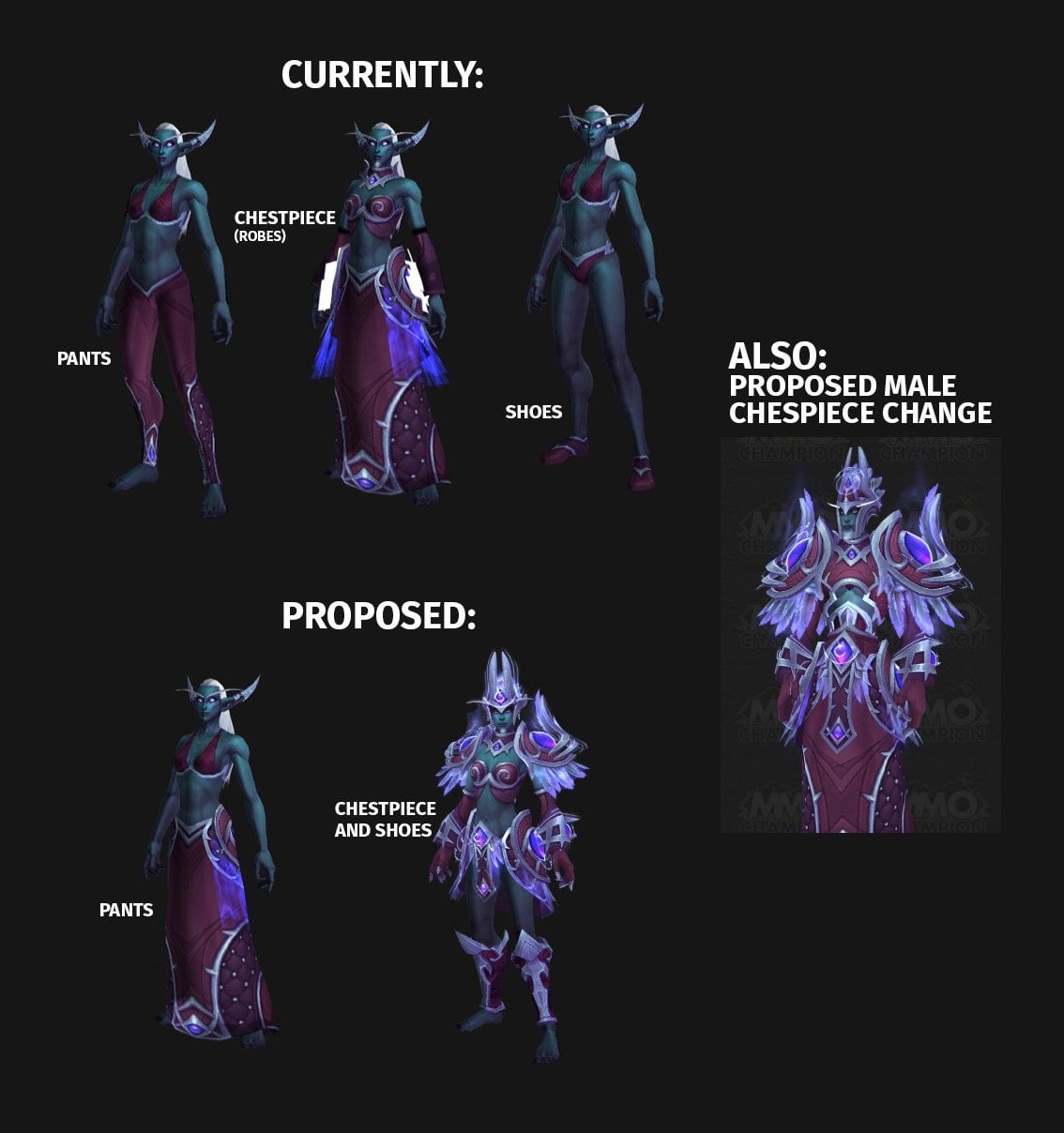 With the chest stealing all 3D geosets including the robe piece, it is impossible to have a robeless look while maintaining most of the heritage parts.

These are the few additional changes that would really complete nightborne for me, barring slight model edits for the male that other posters have gone into in greater detail!