I Think there are allot! of different healing spells but which one are actually usually useful trough out leveling what spells you usually use in the late and end game?
Because you got.
Vivify
enveloping mist
soothing mist
renewing mist
life cacoon
invoke jade serpent.
revival
red crane or serpent statue

I just closed intime STREETS +20.
Here is my healing. Vivify used 9 times in all time lmao. Vivify is super bad spell now.
i play with Kyrian, Mikanikos and atotm leggo. 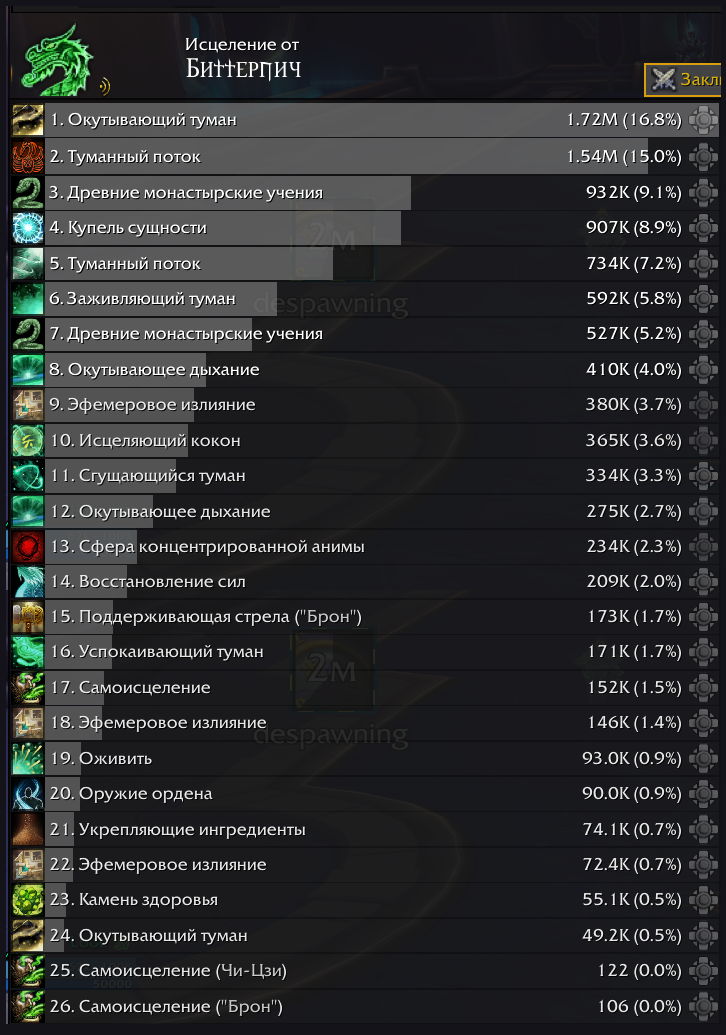 I’m not trying to take away from the other guy’s achievements or experience, but I do want to suggest that the “never cast Vivify” gameplay is most suitable for high keys where the dps is really good at avoiding the avoidable damage.

For the mortals among us, with party members who definitely will get cleaved or stand in fire at some point, Vivify paired with Renewing Mist hots is very powerful. Cast on a single target it’s underwhelming, but then you realise it’s going to cleave to everyone with ReMist, and suddenly it makes sense.

If you find your groups tend to take a lot of damage, or you’re early in your mistweaving career and finding that the party is slowly dying from chip damage and you can’t seem to heal them enough, consider a mastery build. With Essence Font and ReMist on everyone, you can get some big Vivifies that spread out over the whole group and fix whole-party problems in 2-3 casts.

Mastery builds aren’t popularised because the high end crowd (what few MWs there are in the high end) doesn’t run them, but for clearing 15-16s they are actually very comfortable and shouldn’t be underestimated. At the moment I’m running crit/mastery with Venthyr and Ancient Teachings, and it’s keeping my groups safe. There’s no situation where party deaths are because of insufficient healing.

Tear of Morning is an alternative legendary that works better with our mastery (Vivify’s cleave procs it), and allows you to step out of melee without dumping all your effectiveness; it might be worth investing in for M+ affixes like storming, sanguine or spiteful.

Where even I won’t touch mastery is raiding. Our mastery has no place in raids, nor does Vivify. Which is unfortunate and I wish Blizzard would look at making our mastery do more in raid groups so I don’t have to carry two sets of gear for the same role!

Anyway… my 2p on the other spells we have.

Renewing Mist; keep as many out on the party as possible. It is what makes Vivify cleave, and it works with the Rising Mist talent to make Rising Sun Kick heal the party. Both are good.

Essence Font; afaik, all MW builds benefit from keeping this hot active. It double procs mastery and interacts with the Rising Mist talent. Both are good.

Cocoon is a viable panic button, especially in raids, where I tend to dump them on priests and other squishies who suddenly dropped to low health. It is often enough to keep someone alive until they are fully healed, and it will beef up all hots on them, so it makes the job easier.

Soothing Mist… is appropriate on a target you are going to put 3+ Vivifies into. Which is rare if you went with a big mastery build, you’ve probably topped them in 1-2 casts. It’s even rarer if you’ve gone with a high end fistweaving build. Not saying never cast SooMist, just don’t make it a muscle memory habit to do so before every Vivify or EnvMist.

Chi-Ji talent is excellent for M+, swap to Refreshing Jade Wind for raids unless you have less than 6 melee including you. Jade Serpent Statue is hard to make a case for, because it requires you to cast SooMist to start it off; and you shouldn’t be casting a lot of SooMists.

Revival is very powerful if you have Essence Font hots out. Always cast EF first unless deaths are likely to happen during the channel time.

dps is really good at avoiding the avoidable damage.

For the mortals among us, with party members who definitely will get cleaved or stand in fire at some point

If someone wants to go to Valhalla with cleave/voids or fire - let him go <3
Maybe he won’t want to do it next time.

I’d rather assume my dps/tank are fallible humans who will make mistakes, and be in a position where I can fix them. I’m bound to make some of my own too, so hopefully at least one of them has engineering res

(Tangent; if you play a class that has no battle res, but take M+ seriously, there is no excuse for not being an engineer. Your success rate will shoot up dramatically when you can peel the warrior off the floor with the boss at 50%!)