So, Jånek, is there any indication yet? Sorry to bug you about it but I don’t know how to check this myself.

So, Jånek, is there any indication yet? Sorry to bug you about it but I don’t know how to check this myself.
Thanks.

Not yet, last week they weren’t locked until about 23:30 CET.

But when you try transferring a character, it doesn’t matter if the character would qualify for a transfer or not, if a realm is locked you should see this screen when attempting the transfer: 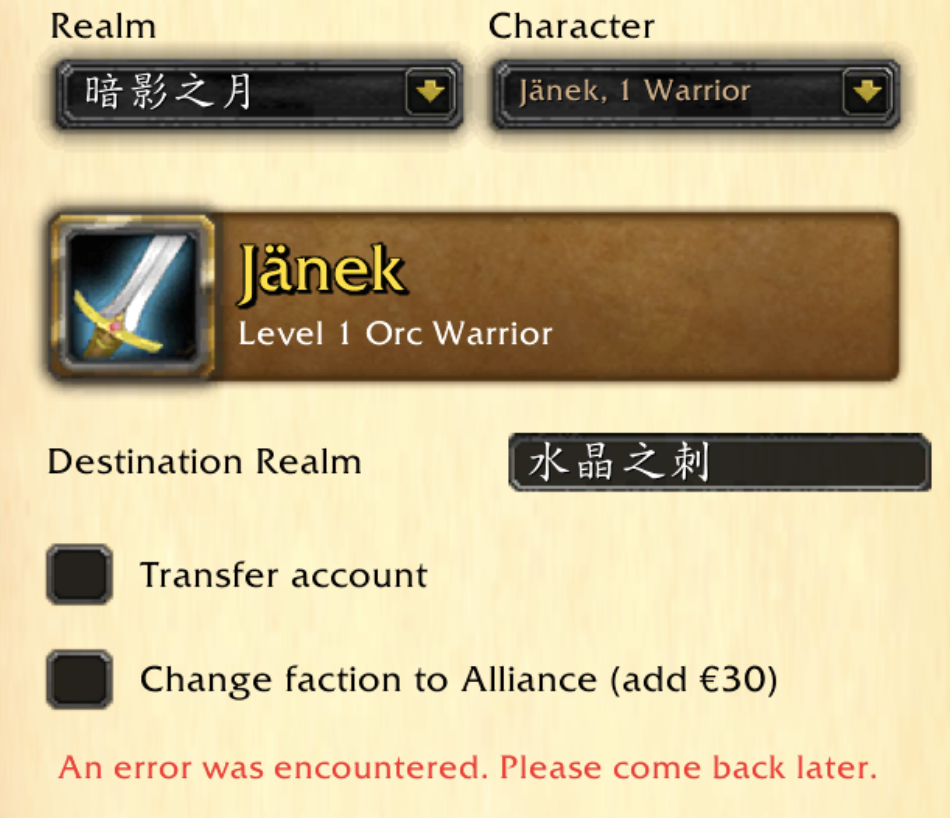 This will come before any other errors that would otherwise block the transfer, for example, transferring the same toon to a server that isn’t locked will just look like this: 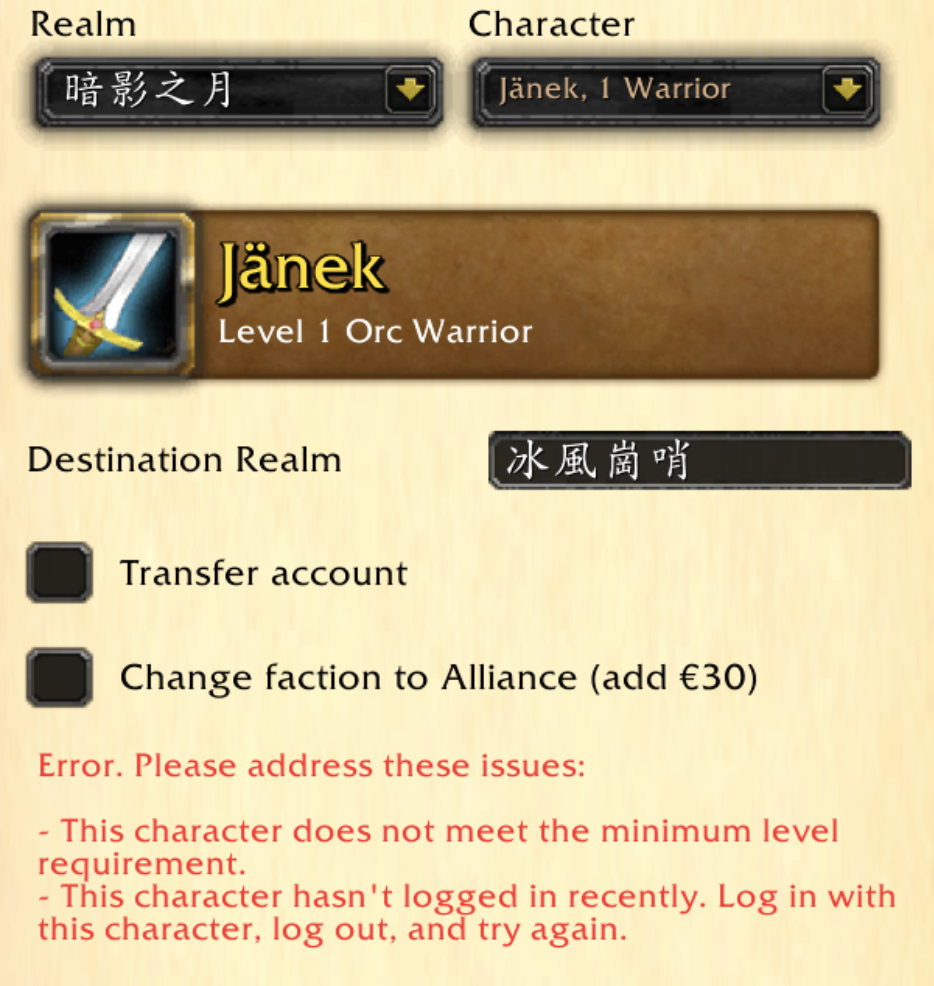 It doesn’t matter though because even if you do test this on a toon that would otherwise be eligible for a transfer, you can just exit out of the shop window if the popup comes up and the realm isn’t blocked, having a toon that isn’t eligible for transfers just speeds up the process cause you can keep plugging in realm names which makes it easy to check the whole region in like 5-10 min.

I’m assuming the connection(s) this week all went ok? Not heard anything different.

I’m assuming the connection(s) this week all went ok? Not heard anything different.

For EU yes, but there were 2 in other regions that didnt happen, overall 11/13 happened…

one connection (Medivh/Alleria in US) was called off in advance and another (Dragonmaw-Order of the cloud Serpent in TW) didnt happen and i have no clue whats going on there, probably posponed but blizzard hasnt said anything.

EDIT: seems they took the Frostmane server offline overnight and order of the cloud serpent is now connected to it, so it is successful even if it happened a day after its allocated scheduled time.

Thank you. I have tried to transfer to my realm and it seems to work, so I guess Kul Tiras is not on the list, or they have at least not started yet.

Thank you. I have tried to transfer to my realm and it seems to work, so I guess Kul Tiras is not on the list, or they have at least not started yet.

It doesn’t seem to be, the only Realms currently locked are US-Medivh/Exodar and TW-Crystalpine Stinger/Frostmane (oddly there though it doest affect other realms in their server cluster), all realms that got locked due to previous incomplete connections. I have also noticed that they haven’t really fully locked down realms in the TW/KR regions before doing connections but this may be due to the size of the region, there wouldn’t be many people transferring cause there just isn’t that many realms to move around between.

However even if Kul Tiras or any other realm isn’t locked, that doesn’t mean it isn’t due for a connection. Remember, at least historically because we don’t know what Blizzard will do going forward, this has only affected the realms they are about to copy over & decommission. They may even streamline the process sometime and decide that locking realms isn’t required as they get better with connecting servers, but we won’t know until it actually happens.

Regardless the communication and information flow differs in every region, and if you are watching the realm connections we can only rely on past trends and assume those will continue going forward, but ultimately blizzard will decide the information flow and what they want us to see.

Yes, it’s very odd, as far as EU goes I’ve done some checks recently and I’m of the idea the population indicators are quite reliable, but not perfect: example in the past connection I got surprised that the french RP realms hit full instead of high, and also the russian realms that include borean tundra hit full as well, I have a hard time checking russians, so I did something different:

As for the english realm, what really surprised me is that, at least the other day, even twisting nether had dropped high, and even argent dawn and tarren mill, that hadn’t happened in a while, at the time I checked the only full realms were draenor, silvermoon, kazzak, there’s no way in hell twisting nether is lower than that french group I told you, it has higher numbers than almost every other realm, and so goes for argent dawn, as for ragnaros vs stormscale they usually had similar numbers, but overnight stormscale seems more active.

As it is though, the algorithm seems definitely harsher on english than german realms considering at the same time as I only saw those 3 english full, you had blackmoore, blackhand, blackrock, antonidas and thrall german full, while if you go check on who english realms destroy german realms when it comes to top population.

No connections mentioned in this week’s maintenance schedule

Yes, it’s annoying, I think they most likely will announce them later and do them, but after a disappointing round last week I was hoping for better realms this week (for me) and normally they always announced sunday on the breaking news, so more waiting again.

Nope, and no new realms are transfer blocked either, guess we will have to wait to see if Blizzard announces anything in the week to come

No new US connections annoucned either.
We have like 5 weeks until SL launches.

There is still a lot of work to do with English servers so skipping a week is not helping at all hopefully they’ll announce something later.

I’d hate to start SL on a dead server

No new US connections annoucned either.
We have like 5 weeks until SL launches.

There is still a lot of work to do with English servers so skipping a week is not helping at all hopefully they’ll announce something later.

US connections generally arent announced until monday, what happened last week was an exception and not the norm tbh. But it is unusual to have both a blank maintence page and no locked servers.

US- Medivh/Exodar are still locked though and in a US forum post they said they will attempt that again this week, they will have to announce a time for that and hopefully some other servers with it.

There is also the Connection In TW that got posponed in TW where crystalpine stinger is still locked and that is due to connect with sundown marsh. So there is no way they are finished yet but it will be interesting to see how further developments unfold. One thing is certain, it isnt shaping up to be a normal week

I’m still hoping for Lightbringer/Mazrigos to get merged with at least one other server before Shadowlands.

Nope, and no new realms are transfer blocked either, guess we will have to wait to see if Blizzard announces anything in the week to come

Could it be because of an incoming pre-patch though? The maintenance schedule has something listed for Wednesday.

It seems very weird they wouldn’t even give a decent amount of days of warning for the patch.

@Sharrynik: definitely lightbringer will be connected, it’s way too low not to, although the in game population indicator isn’t completely fool proof, I’m pretty sure every single low pop will disappear, they obviously don’t have the time to deal with a lot of mediums or higher, so for those it’s hit and miss but realms like lightbringer there’s no doubt.

Just wish they’d get on with it already

Could it be because of an incoming pre-patch though? The maintenance schedule has something listed for Wednesday.

2 hour maintenance isn’t prepatch, they would schedule more time for that and give more warning

I sense a connection with Emerald Dream-Terenas… I can feeeel it!

(seriously, I can’t, but I am curious if we get another connection too).

Absolutely yes, emerald dream was pretty similar to darkspear who got a connection, so you will too, still marked as low.

For a moment I thought it was pre-patch this week.
Why? Because no connections and on two characters all my new missions (mission table) were gold. But nope, that was just on those two.