[PCU] Plotline: The Prophecy of the Fallen Moon

The Pridesworn have gathered up their forces to venture across the Dark Portal and stop the Vor’dorei conspiracy. Their forces marched north of Shattrath and passed through the spider-infested tunnels to arrive in Blade’s Edge mountains. 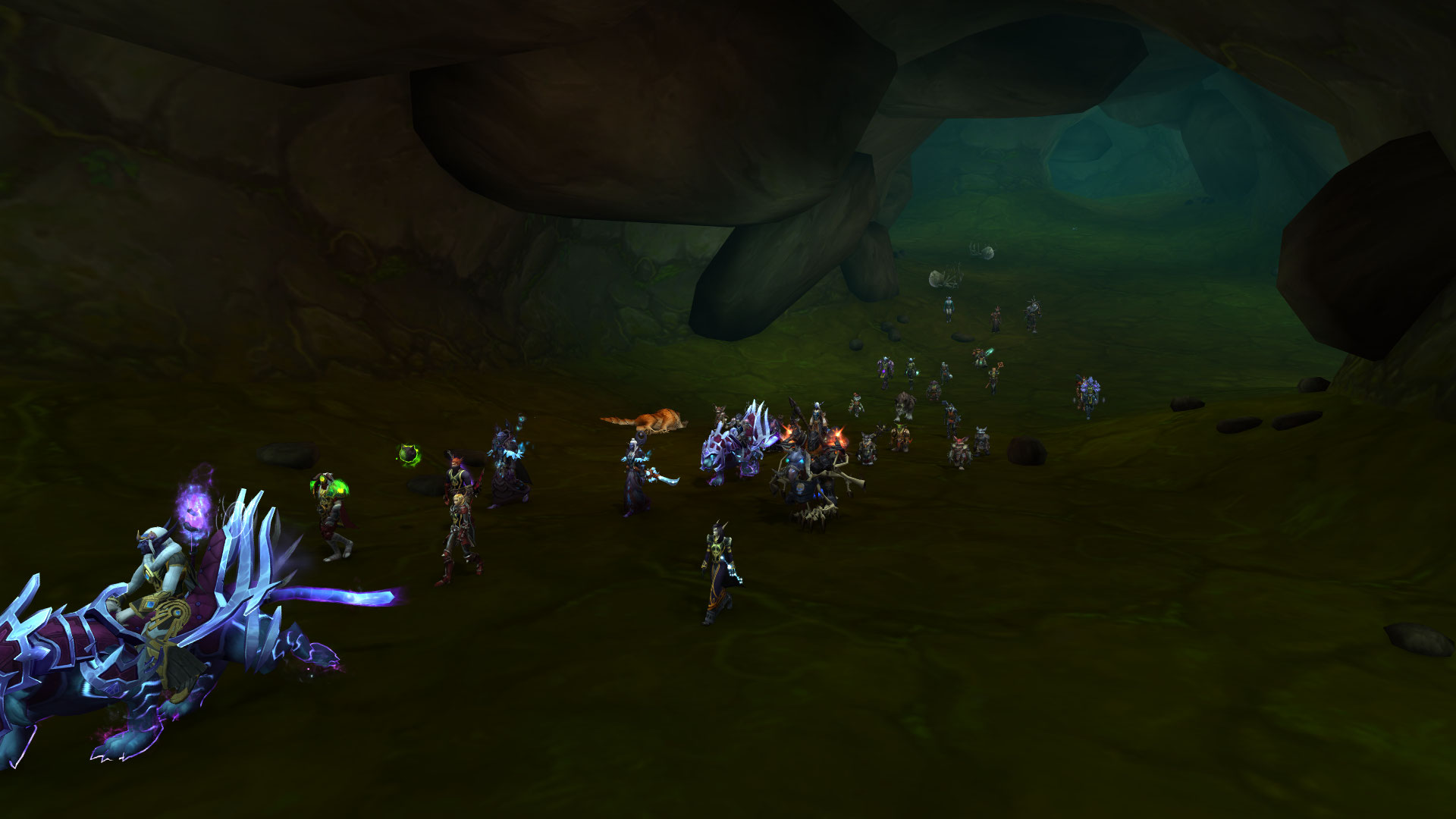 Little did they know that Alliance forces had already made camp in Sylvanaar and were preparing to purge the threat themselves. Gathering in the Night Elven settlement, the Order of Oronaar, the Assemblage of Uld, the League of Modimus and the Dirge of Teldrassil were already preparing their next moves. A force of Draenei, Kaldorei and Worgen ventured into the tainted forest of Sylvanaar to purge away the Arakoa threat therein. 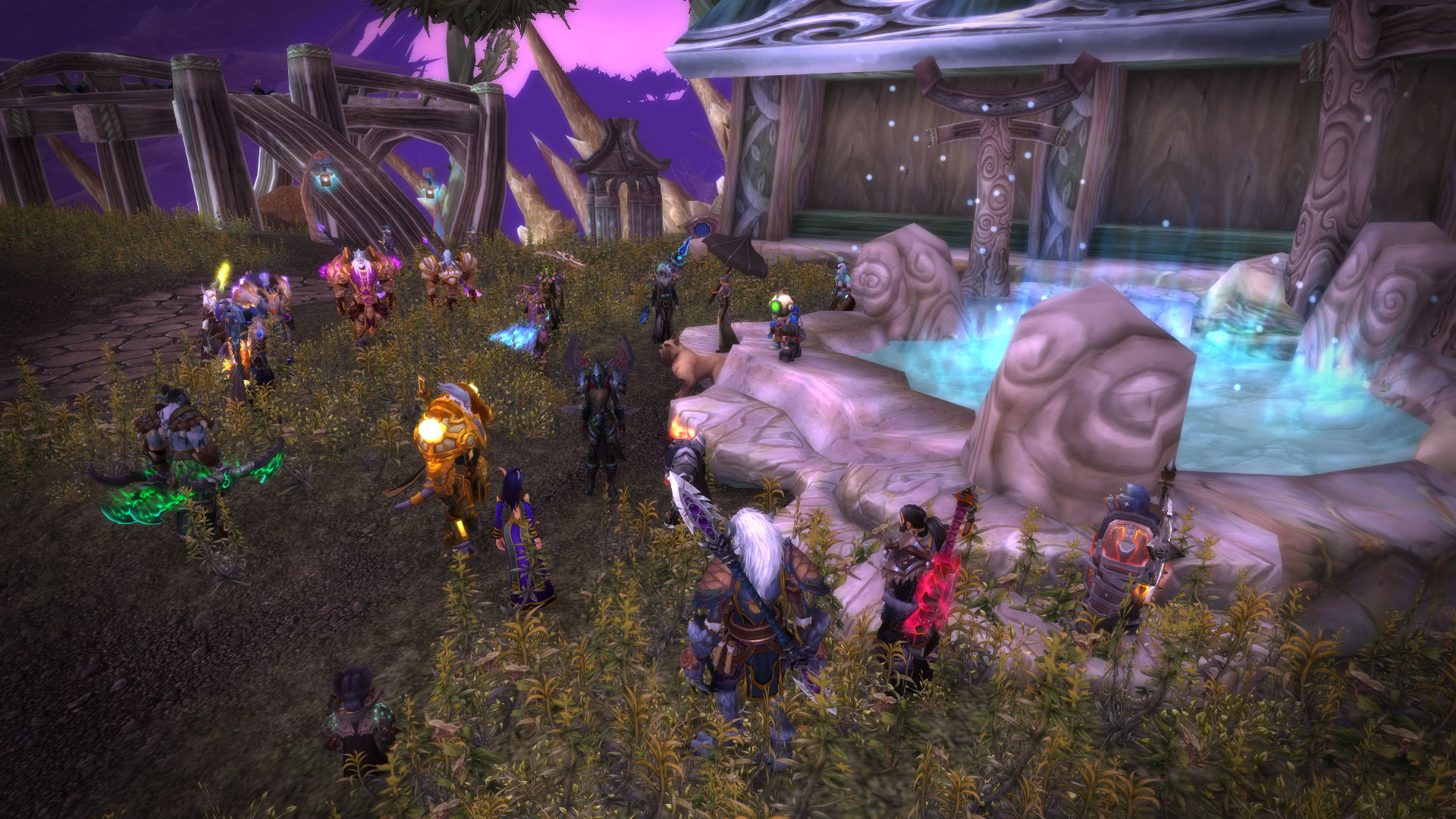 Meanwhile, the Bilgewater Battalion stood for the defense of Thunderlord Stronghold and battled the Assemblage of Uld and the League of Modimus headed over the stone bridge. The Eternal Sisterhood and the Dustpaw Caravan negotiated with Ogres of the Bladespire clan to arrange for supplies, information and free passage. Naturally, no negotiations with Ogres can go without a proper fight in an arena… 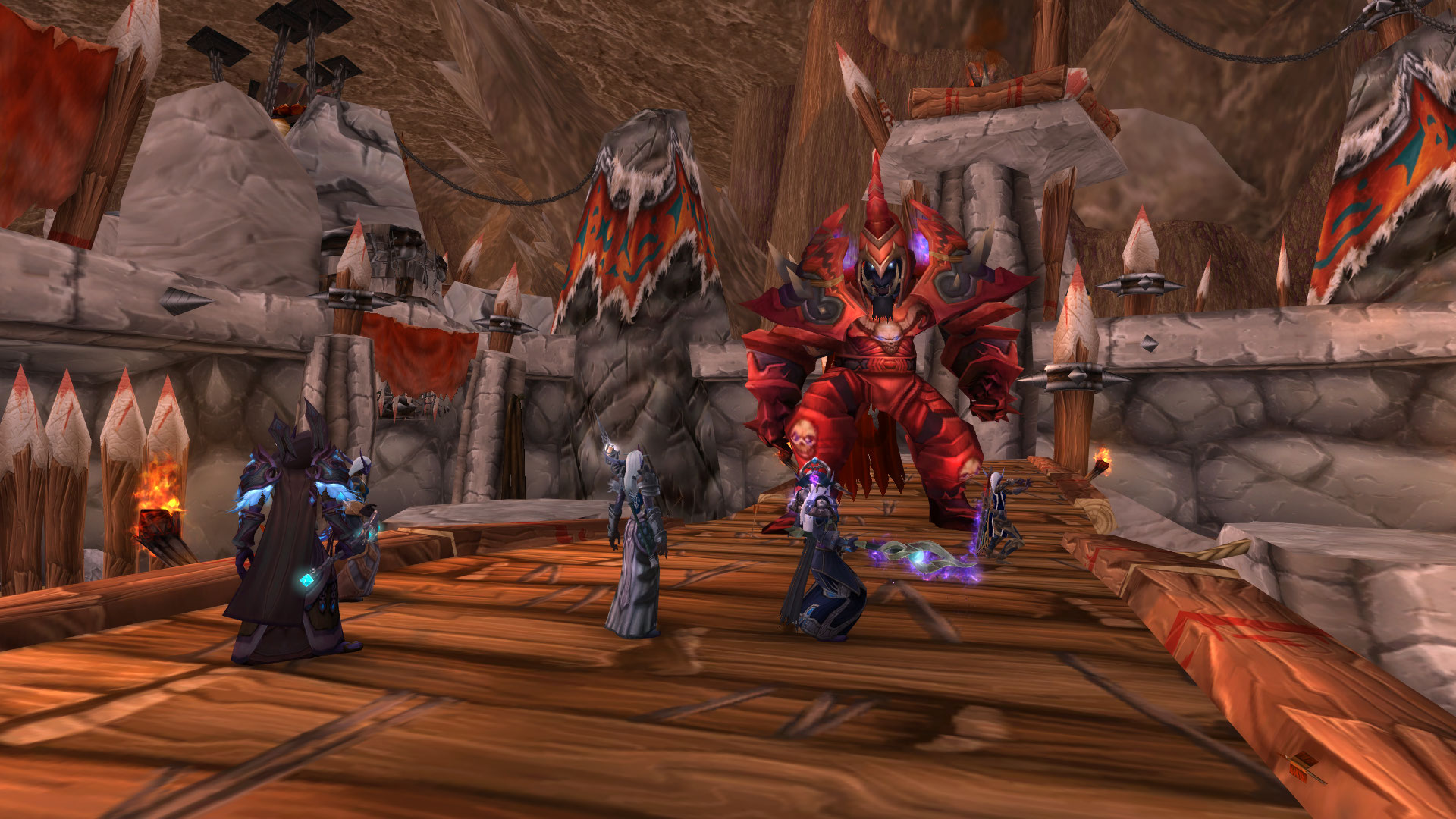 During the engagement, the Highblood Myrmidons travelled to the forests of Terokkar to pursue the trail of the Vor’dorei there with the aid of Shattrath’s Scryers. The Blood Elves scoured their library and then visited Firewing point where they found clues of a cultist raid, at the very site where Kael’Thas’ forces had previously prepared his manabombs.

The first night spent by the Alliance and Horde in Outland was marred with the ever-encroaching Netherstorm from the east and the many dozen drake riders that patrolled the skies. One of these dared to go as far as to assault the Horde encampment in Thunderlord stronghold and leave a burning wake marred with shadowflames before her retreat to the mountains.

The Dustpaw Caravan declared an ambitious project to elude the Storm and deliver a caravan of supplies to Mok’nathal village beneath the mountains, through a series of demon-infested tunnels. Their journey was aided by the Bilgewater Battalion and by a demon hunter guide of the Highblood Myrmidons while the rest of the Pridesworn assaulted Toshley’s station right over the ridge. 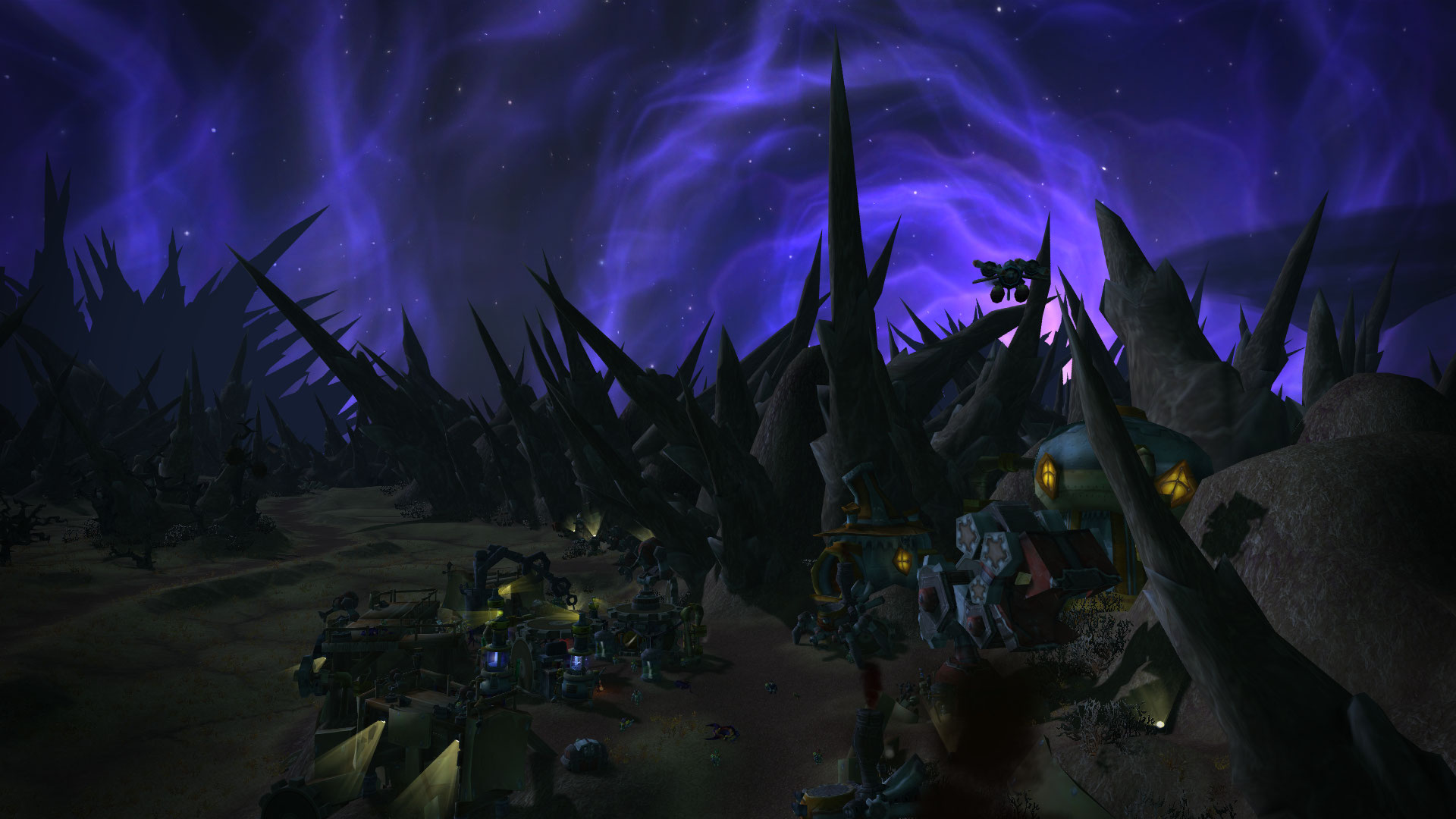 Alliance forced dashed to reinforce the station while the Order of Oronaar and the League of Modimus were led by their faithful ally, the void elf magisterial secretary Variona Featherstring to the Singing Ridge. She claimed to the Draenei that they would find the source of the tain there that keeps the Nether Drakes enthralled in service under the Vor’dorei.

As the Draenei arrived, they were immediately assailed by a pair of drake hunters. Despite their attempts at negotiations and reasoning, the drakes kept up the assaults and the dwarven attitude of “IT’S TOIME TA BECOME DRAGONSLAYA’S!” prevailed. Variona taunted the Order of Oronaar and revealed herself as the Matriarch of the drakes, having formerly guided the Dirge and Valthyn through manipulation to better serve the Vor’dorei. The matriarch sought to get rid of the Draenei and the Dwarves as she considered them “pestering intervention” into her plans of guiding the Dirge of Teldrassil to Esgalroth. 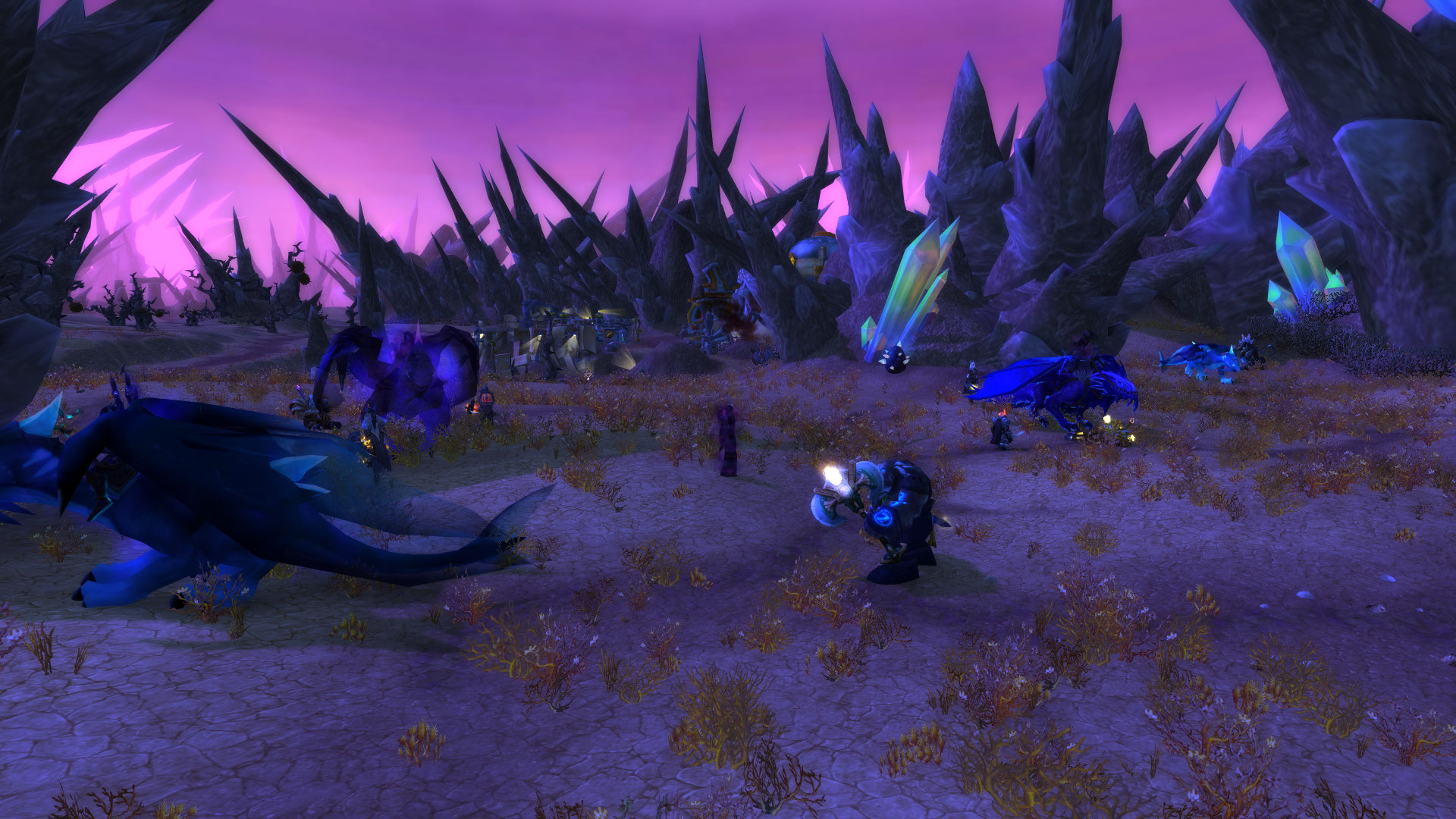 The Draenei and the Dwarves had to fight the dragons against all odds, to the point where one of theirs was knocked by the wing of the matriarch into a set of eggs where many a whelp hatched. Despite the betrayal and surprise, the Alliance prevalied and the matriarch’s reign was ended by the Draenei. As soon as her head was severed, the mesmerizing spell of Esgalroth’s staff was lifted and the drakes were freed above, shaking off their riders and returning to their nests.

Long was the way to go, however. The storm remained, the days were short until the prophecised end of the world by Esgalorth and still much to travel. The Alliance dispersed their forces between Sylvanaar and Toshley’s station, ready to make the long trek on the ground to Stormspire the next day, the heart of the Netherstorm.

Meanwhile, the Vulpera succeeded in their caravan route and were welcomed by the Mok’nathal who were isolated by the storm and the assault of the cultists. Re-supplied, they agreed to allow the Horde rest in their village for the night.

The following morning started with the Alliance forces in motion, making their long trek across the Blade’s Edge mountains towards the Netherstorm. Meanwhile, the Pridesworn wielded a great artifact recovered by the Highblood Myrmidons: the Sun Sphere of a Sunfury Nethermancer privy to the greatest magical secrets of Kael’thas. The sphere was charged with energy and raised to the sky above Mok’nathal village, clearing away the storm and paving the way for the Pridesworn to fly to Area 52.

There, they divided their forces. The Vulpera would scavenge for supplies, the Sisterhood would inspect the Eco Dome in the centre of the region while the Bilgewater and the Highbloods would assume the responsibility of foiling a Vor’dorei plan at Manaforge Ara to infuse a manabomb with void energies and unleash it upon either the Alliance or the Horde forces. 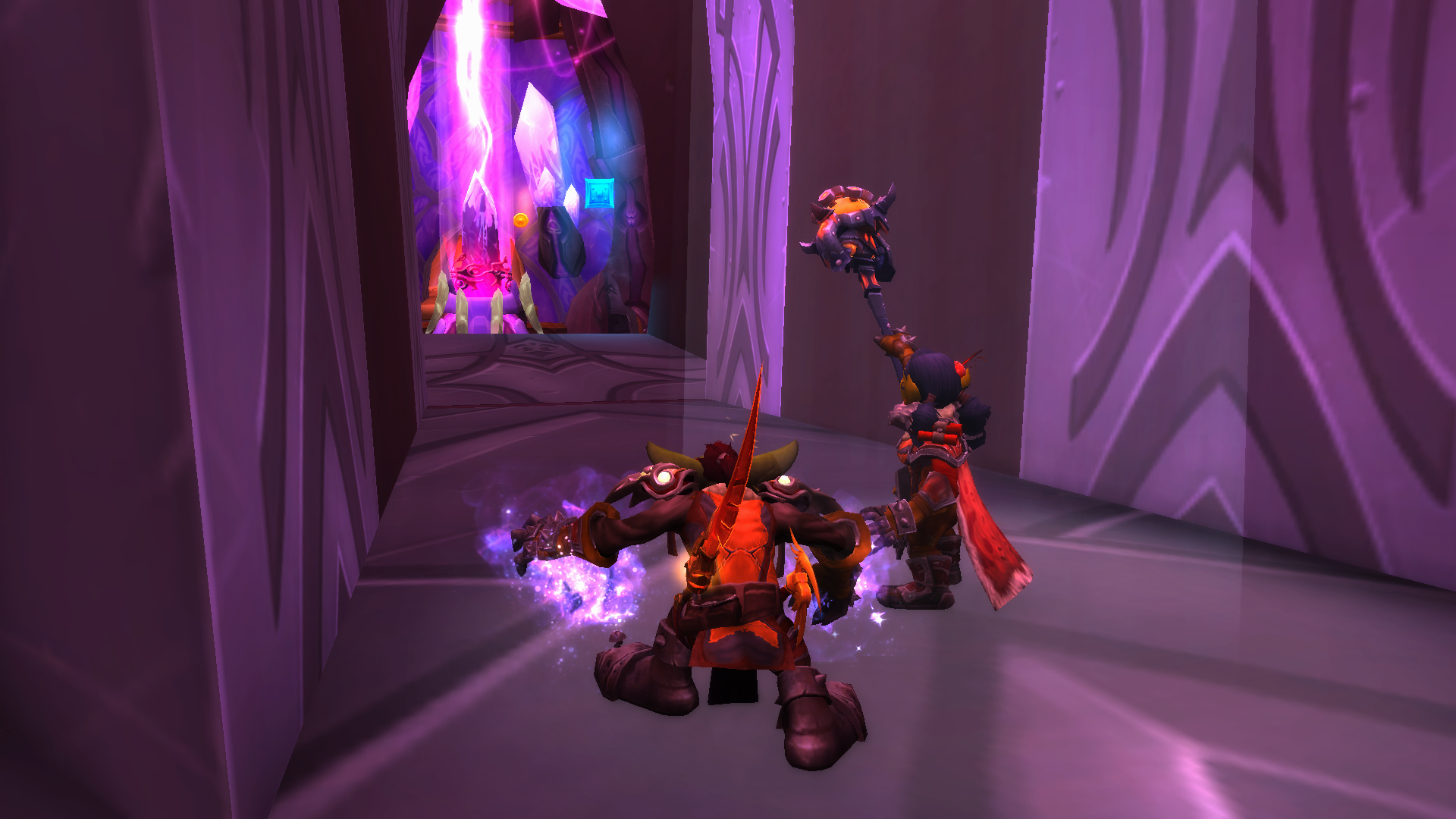 The Alliance made their camp at Stormspire and split similarly; the Dirge of Teldrassil travelled to Eco-Dome Midrealm to reinforce it with the aid of their wandering ancient while the Order of Oronaar led the Assemblage and the League to the ruins of Kirin’var village where cultists were harvesting souls of the dead to fuel their rituals.

A single vulpera accompanied the Eternal Sisterhood to the Eco-Dome where the Kaldorei and Shal’dorei forces immediately engaged in battle. Worse for the Eco-Dome, the Nightborne had previously summoned a celestial superweapon, the shape of Ysera from the sky descended as a nether-construct mockery in service to the Sisterhood who released its cosmic might on the Dirge of Teldrassil. 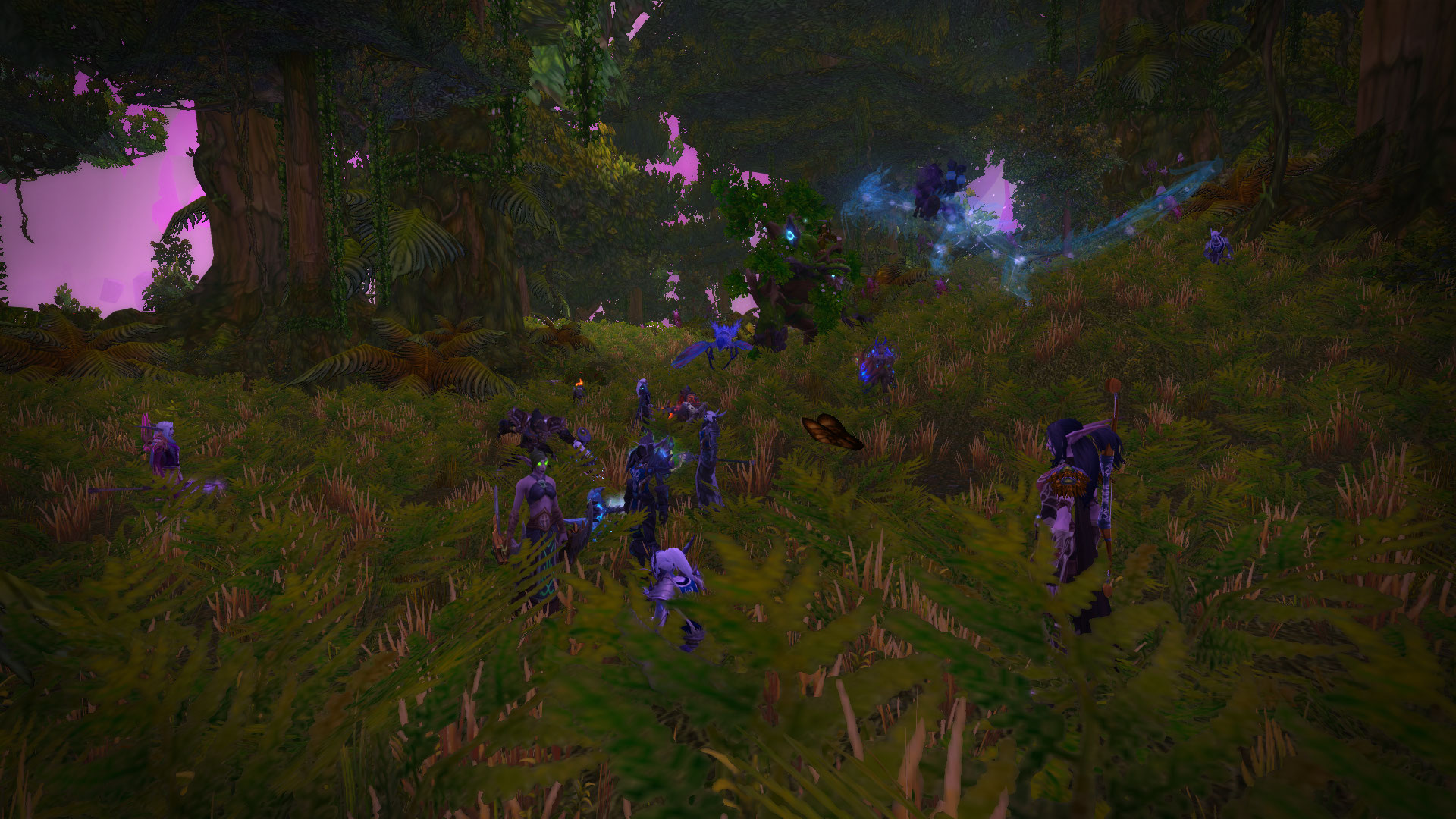 Struck by the sight of the Dirge ancient charred by solarfire, the single vulpera accompanying the Sisterhood turned to side with the Dirge and helped heal him. The Sisterhood immediately withdrew and returned to Area 52.

The Bilgewater Battalion and the Highblood Myrmidons also returned. During their assault of Manaforge Ara, the Sunfury remnants that sided with the Vor’dorei activated the void-infused manabomb as a last moment act of spite. The Bilgewater Battalion scrambled to dismantle the bomb but the many crystals within its shell proved far too challenging to decipher and the decision was made to cast the bomb into the Netherspace through a portal. Mostly disappeared, the bomb detonated and the shockwaves still shook the Manaforge and forced the Pridesworn forces to return to Area 52, their goal still accomplished.

There, a scuffle developed as the Dustpaw Caravan rose in defense of their wayward member who had since returned from the Dirge of Teldrassil Unharmed. The Dustpaw renounced their oath and allegiance to the Horde and departed, while the rest of the Pridesworn demanded the trial of the vulpera they perceived as a traitor.

And so was that the Horde forces were weakened by the departure of the vulpera. 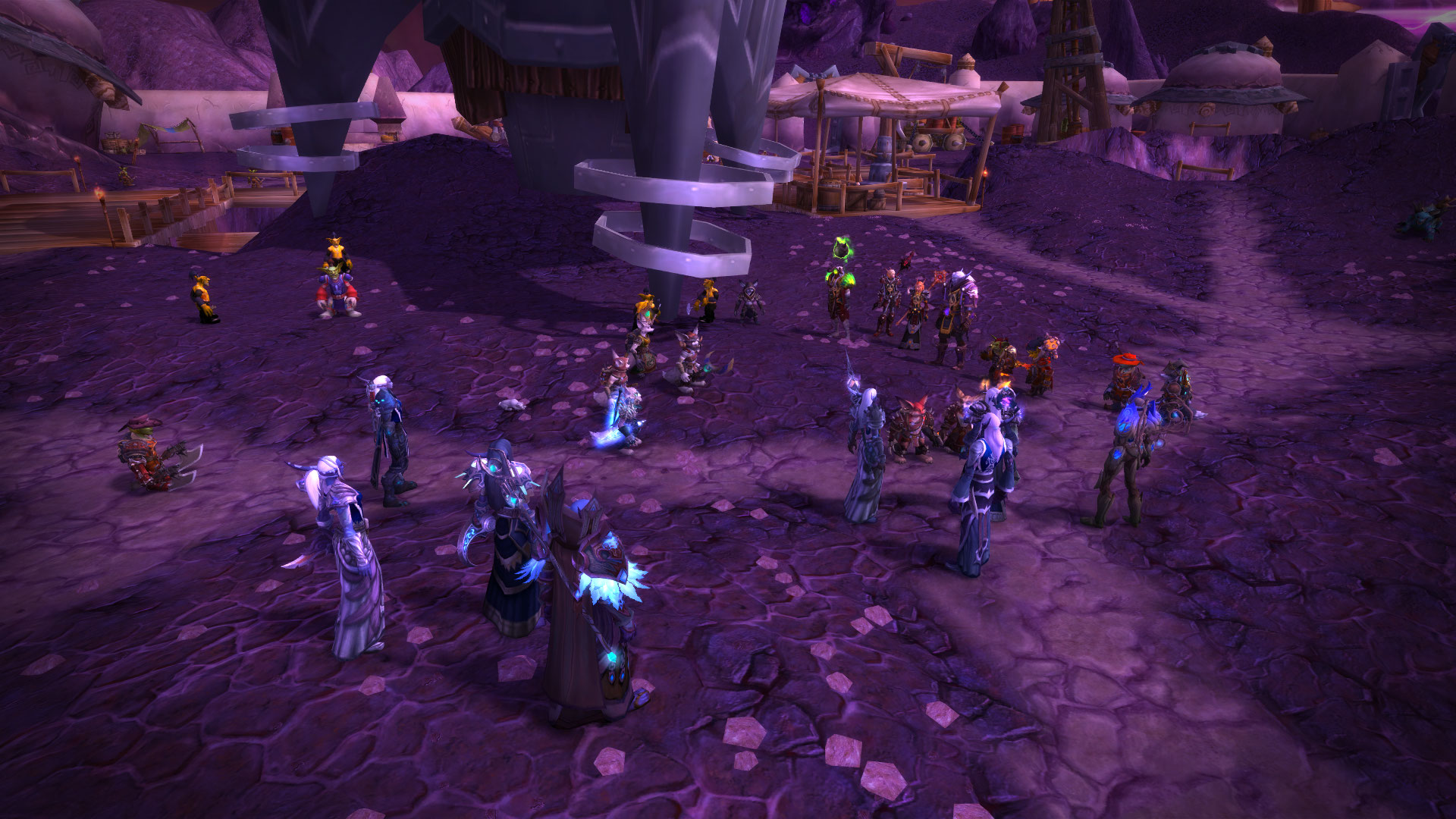 The Alliance camp remained wholly united, their forces returning from Kirin’var with news of victory and triumph. They remained in Stormspire for a night of rest before the next day where they would take the fight to the Vor’dorei. 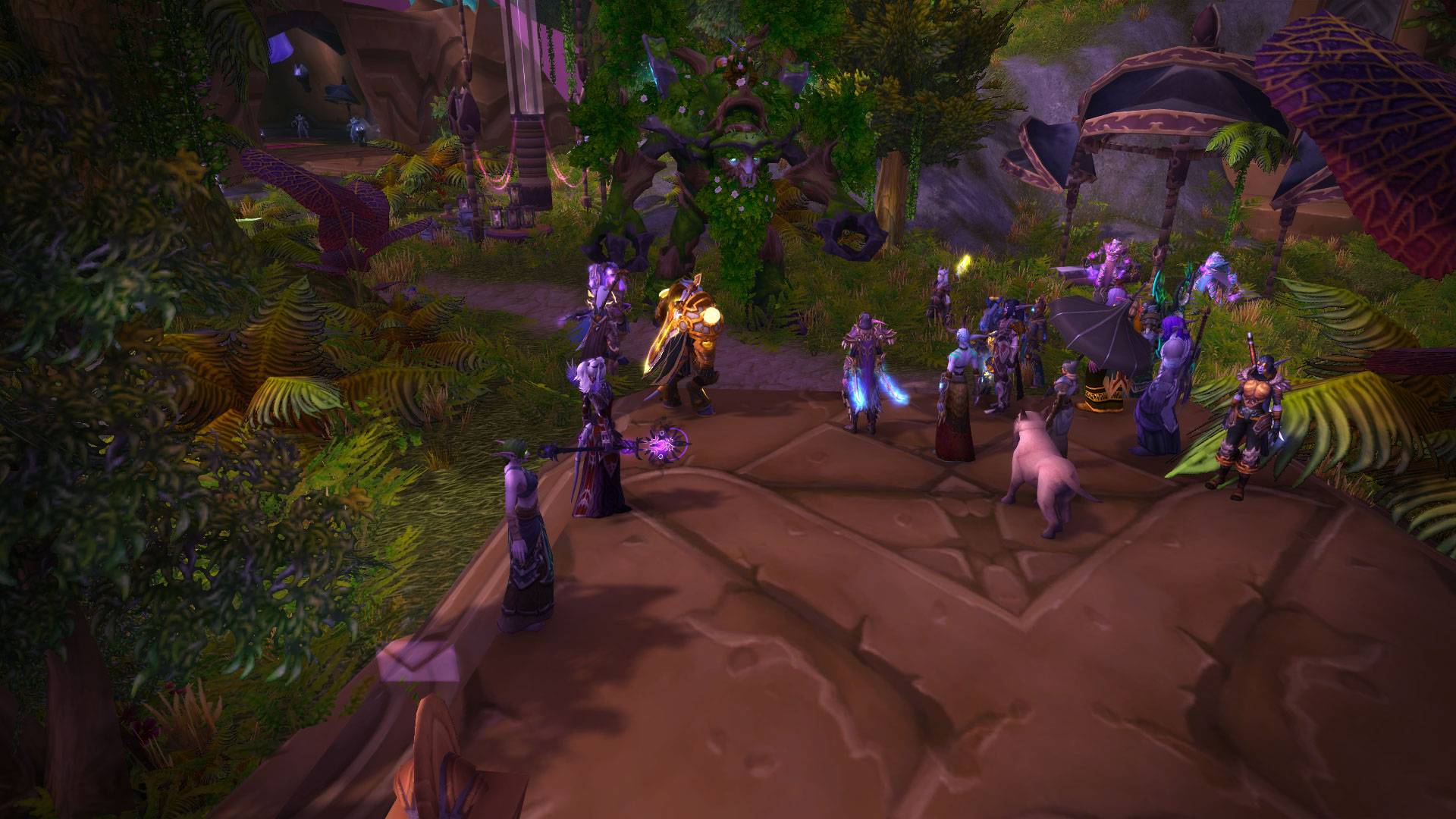 The last day arrived from Esgalroth’s prophecy. The day worlds would clash and the Fallen Moon would have Azeroth release the dark ones that dwell inside…

Neither the Alliance nor the Horde forces felt fully prepared and ready to face the Vor’dorei when a pillar of nether-energies shot towards the skies from Manaforge Ultris. The site wholly reinforced and fortified by the Vor’dorei, both the Pridesworn and the Alliance decided that an assault will be the last option to save both Outland and Azeroth from the insane prophecy. In place of the Dustpaw, the Pridesworn invited the Requiem of Sorrow who arrived in full force to aid the Horde against the cultists. 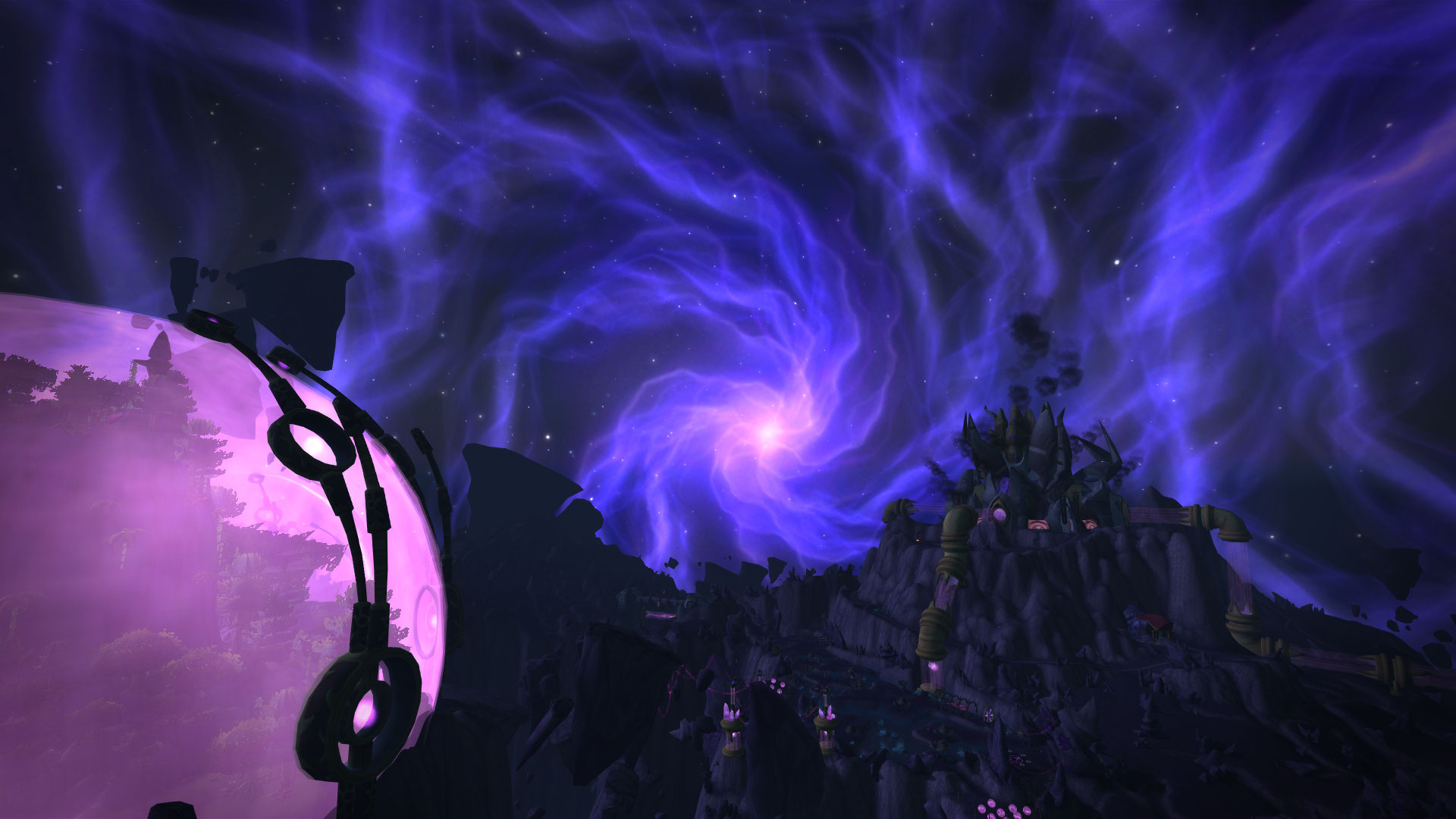 The alliance assaulted the Manaforge from the West, their columns spearheaded by their wandering ancient. The Horde followed the Bilgewater Battalion’s fel-empowered shredders in an assault from the south. Both armies were engaged by Vor’dorei and Ethereum agents intent on delaying the assault on the Manaforge for as long as the ritual lasts. 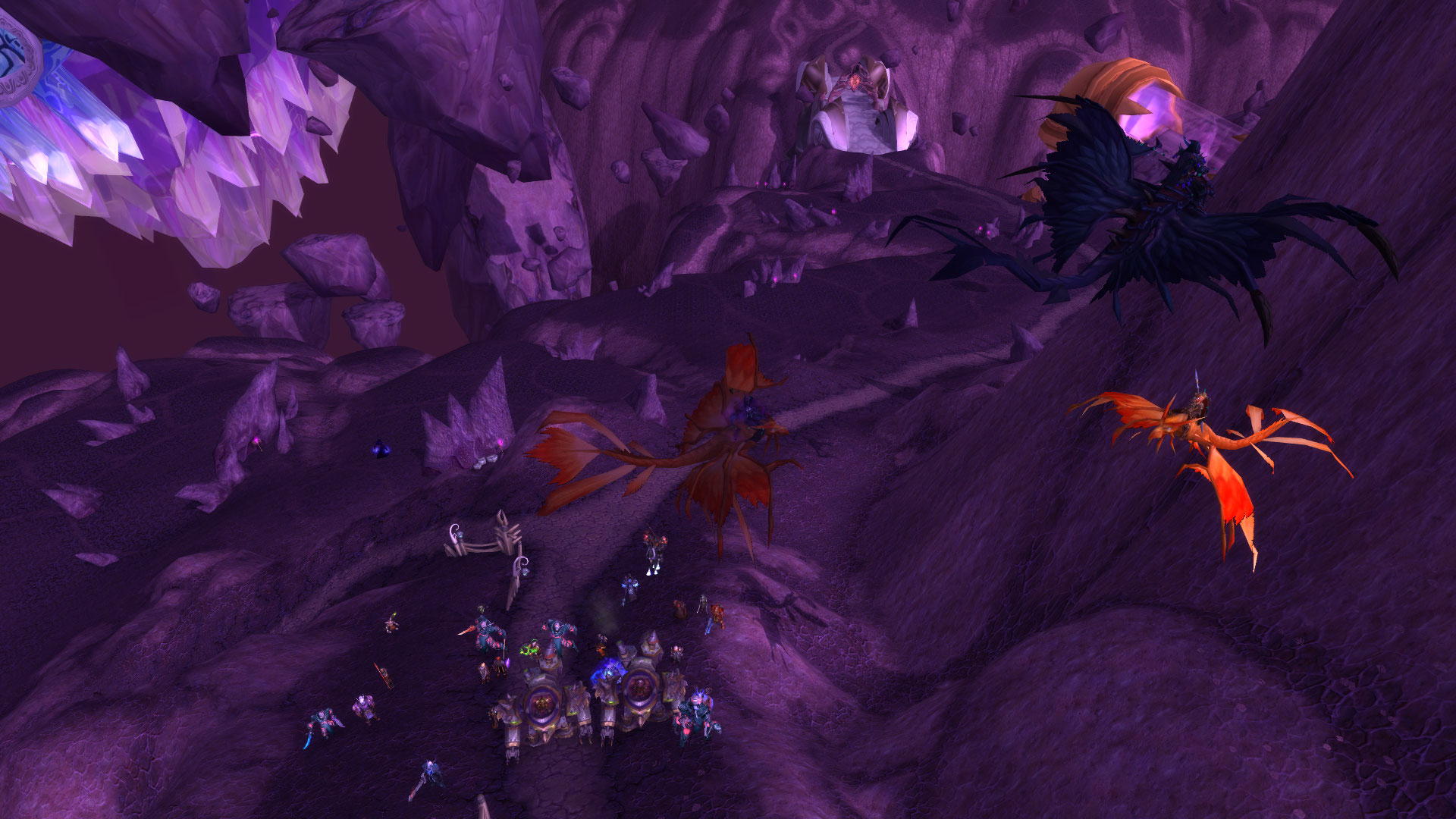 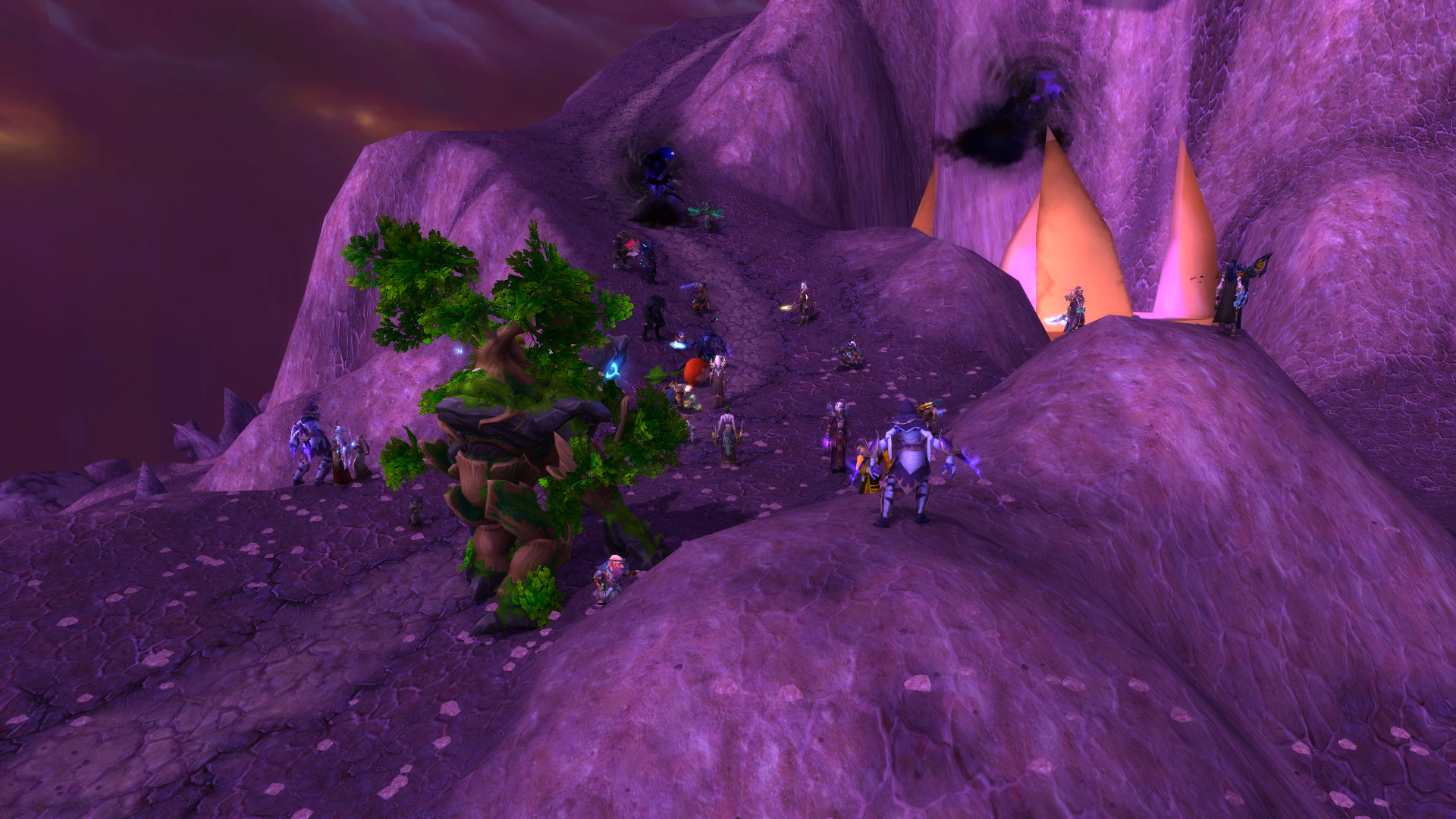 As both attacks were underway, the pillar spread across the sky to reveal a gargantuan portal ready to connect one world to another. The nether-energies cleaned to reveal the distant Azeroth up on the sky, pillars of shadows shooting to wield the ley-line taps as anchors and draw the shattered remains of Draenor towards it. Gravity started to lapse around both battles while winds of the Netherstorm intensified again. The prophecy was underway.

The Vor’dorei forces defeated, both the Alliance and the Horde breached the summit and entered the Manaforge. There they found Esgalorth channeling the ritual with his scythe, who immediately released his last pair of allies at the invaders: a gigantic orc mutated and embraced by shadows, and the fel-fallen druid that had aided Esgalroth since the first days of his insanity in Felwood. 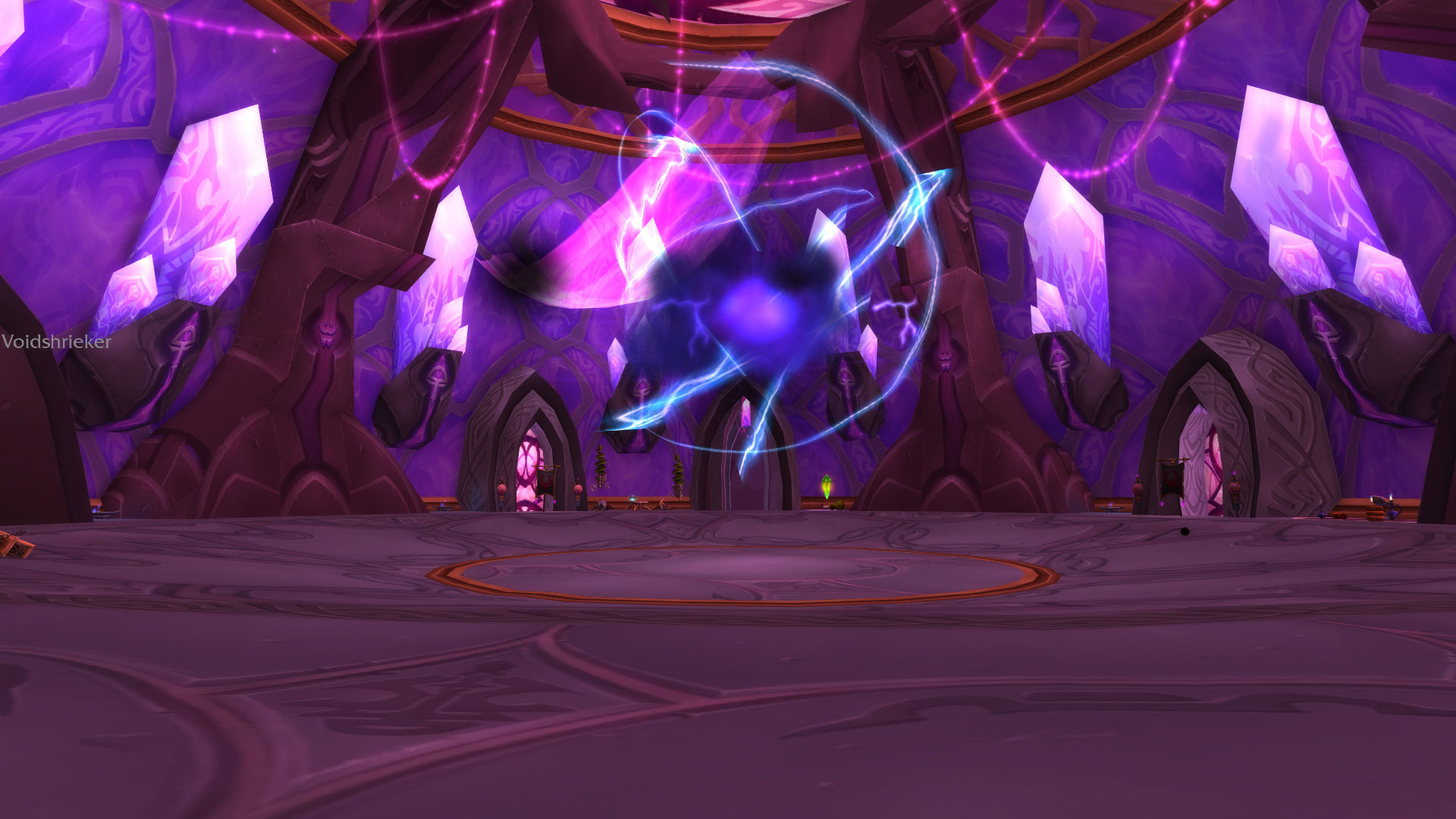 A three-ways battle commenced within the Manaforge where alliance and horde sought to prevent each other from gaining too much of an upper hand. All the while they assailed Esgalroth and his lieutenants. The gargantuan orc charged through slews of enemies to stampede them while Esgalroth ripped the very reality asunder to cause tears of shadows in the manaforge. He seemed all too powerful to defeat even by the combined might of alliance and horde. Meanwhile, astromancers, priestesses and druids on Azeroth noticed a strange falling star appearing on the night sky, one that seemed to be gradually growing in size.

Breakthrough arrived when Esgalroth’s staff overloaded with the energies it was unleashing, forgoing control of the worgen and abandoning him. Esgalroth was promptly beheaded in the centre of the Manaforge while the scythe flew up and spewed its shadows and fires around the interior, calmed by the combined channeling of Alliance and Horde forces. After solidifying again, the scythe shattered in an immense shockwave, sending its liquid remains splashing against the walls of the manaforge to crystallize. Some of the forces present scrambled to acquire these shards while an evacuation was called and the forces retreated before the Manaforge grew far too unstable, its shadows collapsing into themselves.

And with that, the falling star disappeared from the sky, the portal sealed. An eerie silence arrived to Outland once more, the silence of peace while Horde and Alliance discussed their success and their return to Azeroth. The Vor’dorei were defeated, their forces scattered or dead, while their leadership remained slain or turncoated away from their cause.

And the last OOC note here; enjoyed every bit of this storyline up until its closure and I hope all those that participated - either from ground zero or only for the last campaign - enjoyed it and the roleplay around it.

I am really glad for all the development during the campaign, whether for individual characters or for guilds as a whole. The departure of the Dustpaw from the Horde, the unity forged within the alliance that led to the (secretive) re-formation of the Concordat, the easing of tensions between the Requiem of Sorrow and the Bilgewater Battalion …

From an OOC standpoint, the finale of the campaign saw a total of 9 guilds attending, with almost-full raids on both Alliance and Horde side for a total attendance of 72 players. The campaign stretched the limit of what I could handle alone - All in all, it was a wonderful learning curve with lots of take-aways and ideas for the future.

And a true shout-out to all the guilds and their gracious officers who made the finale and the campaign possible. Along with an extra to the Dustpaw Caravan who, despite their early departure, offered to NPC Vor’dorei for the finale & last battle and done that excellently.