While I see your argument, I think its less likely that Blizzard designed the RDF with Cataclysm in mind. The main reason is, that it took a whole year until Cataclysm release after RDF was released. At the point they started designing the RDF, which was probably a few months before the actual release, they were just getting started with Cataclysm, so its less likely they designed a feature for an expansion, which they didnt know how it will turn out at that time. On the other hand at that time they that saw the needs of players during the first half year of wotlk and tried to find a solution that, which was ultimately the RDF.

I think you could compare RDF to features like dual spec or battleground experience/new queue system.

Dual specialization was introduced in patch 3.1, because they tried to encourage players to play multiple roles for reasons like the tank and healer shortage. Because of the costs of glyphs changing talents had become too costly and a fix was needed, with wotlk in mind.
One Battleground change was introduced in 3.1, the ability to queue from anywhere. The other one, the battleground experience, was introduced in 3.2 to encourage more leveling players to experience more variety while leveling.
In patch 3.3.0, they introduced RDF, because especially while leveling, players had troubles finding groups in time. On low pop servers it was nearly impossible. The ability to queue from everywhere and get matched automatically was the same they introduced one patch earlier in terms of battlegrounds. Its the same for crossrealm matching and the port to the instanced destination and back. Blizzard tried to make the casual content, which is battlegrounds and dungeons, more easy to access during the whole expansion of wotlk.

RDF was not a feature that did something never seen before. It was just a process which elements were already present in wotlk at that point, just for different content.

In germany every employee can ask for an employment reference letter when he leaves a company. And employers aren’t allowed to write negative things in it, so they came up with things that sound positive but have a negative meaning.
“He always tried” translates to “He just couldn’t do anything right.”

Hard to say, might aswell have been designed with Cataclysm preperations in mind. Not like they wait with the end of one expansion to start planning and creating the other - Right? So as far as we know (which isnt much) it could have been added as a test or preperation for a game design that was on its way.

It came really late and was never a sell argument for WOTLK, nore did WOTLK need it to grow/keep people.

To compare it with Classic, it would be like saying that the Chronoboon was a core feature for Classic with Classic in mind. It wasnt, it came way to late for that.

I mean, at least it came out at some point in WotLK, and given how long 3.3 lasted and the fact most WotLK pservers are based on 3.3.5 and include it, most people reasonably included RDF in WotLK (at some point) within their expectations.

This new LFG tool, on the other hand, never belonged to WotLK in the first place, but this does not seem to phaze at all the people who claim RDF is a “pre-cata” feature. Double standards much?

You have been around long enough to know one better not try to find any logic or continuity in Blizzards way of acting - hence alot of people wanted them and their ideas to change as little as possible (if anything at all) before the launch of Classic. All Im saying is that they have seen to take a step away from that time-less museum Classic was supposed to be to an arbitrary cherry picking on what makes the game “Classic” and not based on their “design pillers”. This “new” tool is an attempt to “Classic-cate” something that in their opinion didnt belong in their design philosophy, and within that they dont seem to care at all about what was there and not in the original WOTLK.

But you actually can. Or could atleast back in the days: 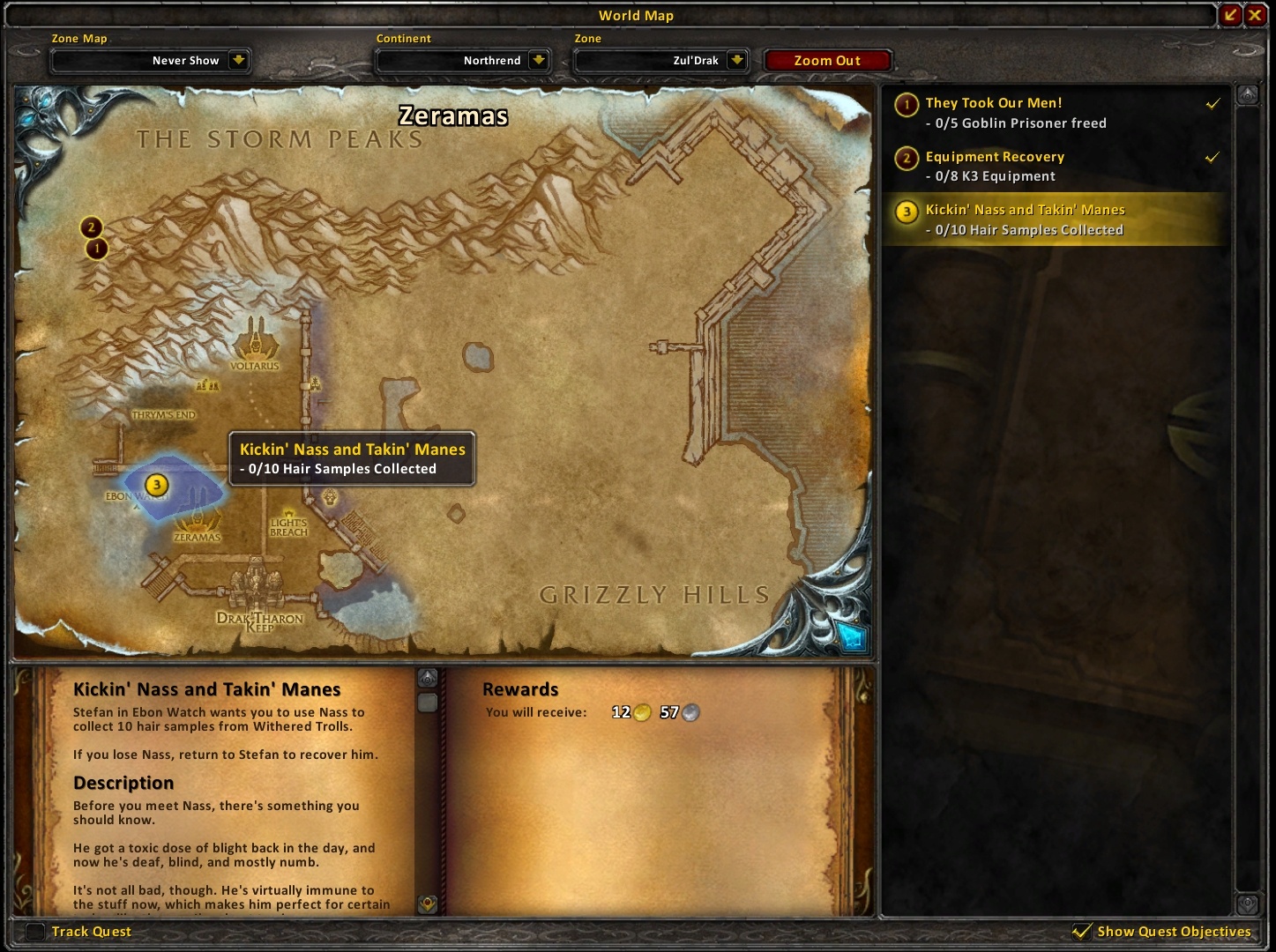 Check the bottom right corner on that map.

But you actually can. Or could atleast back in the days

Not everything, that got introduced in the last patch in original wotlk, is good for classic wotlk. Some of those things are the reason, why retail feels so dead. Quest Helper is one of them, because it removes immersion, and it causes players to level without having to explore, because you know already, where everything is. Quest Helper basically makes the world feel dead, and streamlined.

Retail shouldn’t have quest helper either in my opinion. It’s one of the reasons why quests feel like a chore, because you just run to a circle on your map, and kill mobs over and over, without reading the hints of the quest text, etc. I know, it sounds silly, but in my opinion we should just keep doing everything with questie as an addon, instead putting this in the actual Blizzard UI. It’d be really nice, if they designed retail quests for new expansions to be doable without all those pointers telling you where to go, but they don’t sadly.

Didn’t we just try and discus this with you in another thread?

Almost everyone is using it via questie and those who don’t doesn’t have to turn the function on.

See? Don’t turn it on if you don’t like it, but don’t interfere with all those of us that do use it.

Don’t turn it on if you don’t like it, but don’t interfere with all those of us that do use it.

It’s because of cataclysm classic. Wotlk wasn’t designed for those things, so that’s why it’s not a big deal for wotlk itself, but not having them would force Blizzard to actually rewrite all the quests, and make Cata feel alive, since cata quests are designed in a way, where you have to use quest helper. (See retail for reference.) It would be really interesting to see an alternative dimension of retail develop like this.
It’s all those little QoL things combined, that make the world in Retail feel dead. It’s not only cross realm.

Tldr: I hope they make sure, that classic keeps its Sandbox identity instead having everything feel so linear like in Retail wow.

Yes, you could have the map without Quest objectives ect. But not the Quest list without a map.
I have similar screenies in my old folders.

It’s all those little QoL things combined, that make the world in Retail feel dead. It’s not only cross realm.

The world in retail is far from dead I can assure you.

You mean you want the map and the questlog split in two diff windows? Well yea, I guess that would be an issue then, but is it really that much of an issue?

Yes. I want to - just like it is now - to call up the Questlog without any help popping along. For me it’s a biggie - same as RDF for the crew here.

That’s how it is now, but when Wrath Classic launches, youll call up the ‘abomination’ shown above when you use either L og M.

This entirely depends on Blizzard. I think that’s how the quest log in Retail is. When I tried to play shadowlands it bothered me too. But that’s not how the quest log in WotLK was. Even with quest helper you still had your regular quest log, just in the upper right corner there was a show map button.
In the map, if you disable the quest tracking it will be your standard map too.

Btw I just verified this on Warmane, which runs on the original WotLK Client.

to call up the Questlog without any help popping along

But you don’t mind having the log and the map in the same window? Then just untick the box under the map and you wont get that help that you don’t want.

This works on the map, yes BUT BEEEEP NOT on the log!!!
Sorry to be yelling at you. I have just tried to explain this so many times by now. If you disable help in the map, all is fine as long as you want th map alone - you get the map alone.
But after this is implemented, there IS no Questlog any more - it is integrated int he map, so if you press L you get log AND map.

Lol no worries. I might be thick here, but I don’t see the problem. Apart from the being in one window then.
If you untick the show questobjectiv box, you don’t get any help in the map, ergo not in the log either, right?