Check this video about Classic "Fresh"!

I love the ideas in this video, if Blizzard just includes 50% of the stuff in there, classic fresh would keep me busy for years: 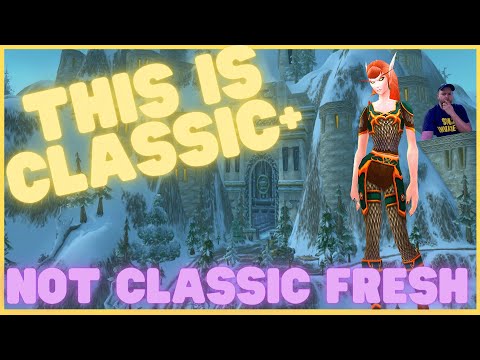 Can’t you just use your own words? I’m not going to increase a youtubers play count for 16 minutes of stuff others have mentioned before.

Trust me, I am the last person on earth pushing a YouTuber or giving credits to a useless streamer. If i post something like this, it is something really good and different. He has some really good ideas i never heard before.

This is the typical example that people do when they got nothing to come with. They basically follow the herd, therefor the servers are dead. What a bunch of complete mo*ons.

Why? If you meant him by following the heard - i dont think so, his ideas are way too good and way to enthusiastic for clickbait, he absolutely made head about the topic.

If you mean me and the players who want fresh: I dont get the hate really. Sometimes you just want a restart, whats wrong with that? I switched to TBC after playing Classic servers from the beginning but it wasnt the same for me as it used to be 15 years ago. I realised that Classic was way better than TBC as a MMORPG so I want it back with some improvements.

And this video has some really great points IMO.

And those points are…?

A summary would be nice. Looks like it’s just a few points on Classic+

btw I never said it was clickbait, just a 16 minute video on a 3 or 4 points, made by others elsewhere probably. Each one only probably needs half a sentence.

Shall I start? Buffs need removing. (A guess)

+1, next time just make a bullet point list, videos are too time-consuming and dispersive before they get to the point… that, as far as I’m concerned of course.

As for the video itself, I checked it, and closed it 2 minutes through when he started to mention new classes being added. No, thanks.

It’s not comming from you and your mind, that is the main problem in basically evrything. You are just quoting another persons words for something that you think sounds good. So what you basically is doing is crying that the game is burning, its not. It is the problem with people like you that the servers are dead. “I want it to be my way or its not going to work”, grow up.

Well, he quoted a video explaining things he agrees to, and that’s it… I wouldn’t go as far as saying he needs to grow up, maybe someone hasn’t taken his pills today?

Maybe, you should go on a successful game forum for which you can simp afterwards…

Im alright now, got a hug from a fellow dorf.

classic is being loved for what it is! & if things was added to it? it won’t be classic anymore!
but speaking about classic+ ??? I think WoW2 would be much better. (wow2 as a whole new mmo-rpg)

WoW2 is (in Blizz mind) all the new content they release in live.

Can’t you just use your own words? I’m not going to increase a youtubers play count for 16 minutes of stuff others have mentioned before.

I watched it, like seen so many times before, it is absent of creative ideas but instead just wants to introduce stuff seen in later expansions at an earlier time.
Classic+ could work with some new ideas and add the Uldum raid or so.

But, why would Blizzard do this? You will gain more money by just milking this game instead of investing in it and then draw maybe 5% more customers. So they will milk it.

I checked it, and closed it 2 minutes through when he started to mention new classes being added. No, thanks.

Thanks for saving 16 minutes of my life, good sir!

I think WoW2 would be much better. (wow2 as a whole new mmo-rpg)

I watched until the arena bit. Hated most of his ideas. Just classic with some new endgame elements would be fine

then we need wow3

Absolutely no, out of the question, this will cost money, money which could go to Bobby and investors.