Faces. Both genders need youthful faces, without sucked in cheeks, and without looking grumpy. Also, what’s up with those thin MJ noses?? Fill in that nose!

Eyes. They have 0 eye colors. 0!!! Z.E.R.O. And why do their eyes look so plain and hollow when night elves can have an array of choices on eye color and eye shape?? Add purple and blue eye shades with actual irises, and some eye shapes that are a little more closed.

Hairstyles. They have some good ones, but they could really use some styles with their hair up, and males with short hair.

Another portion of the ideas, but for male now.

Amazing drawings! If it’s your art, you are really talented

Taking massive action like this will eventually give us Nightbornes what we desperately need!

Oh my, i like the left one a lot

If it’s your art, you are really talented

Thank you very much, yes it is indeed my art

Oh my, i like the left one a lot

A lot of people liked that one in Reddit as well

r/wow - A reminder that the Nightborne males have overall 29 customization... 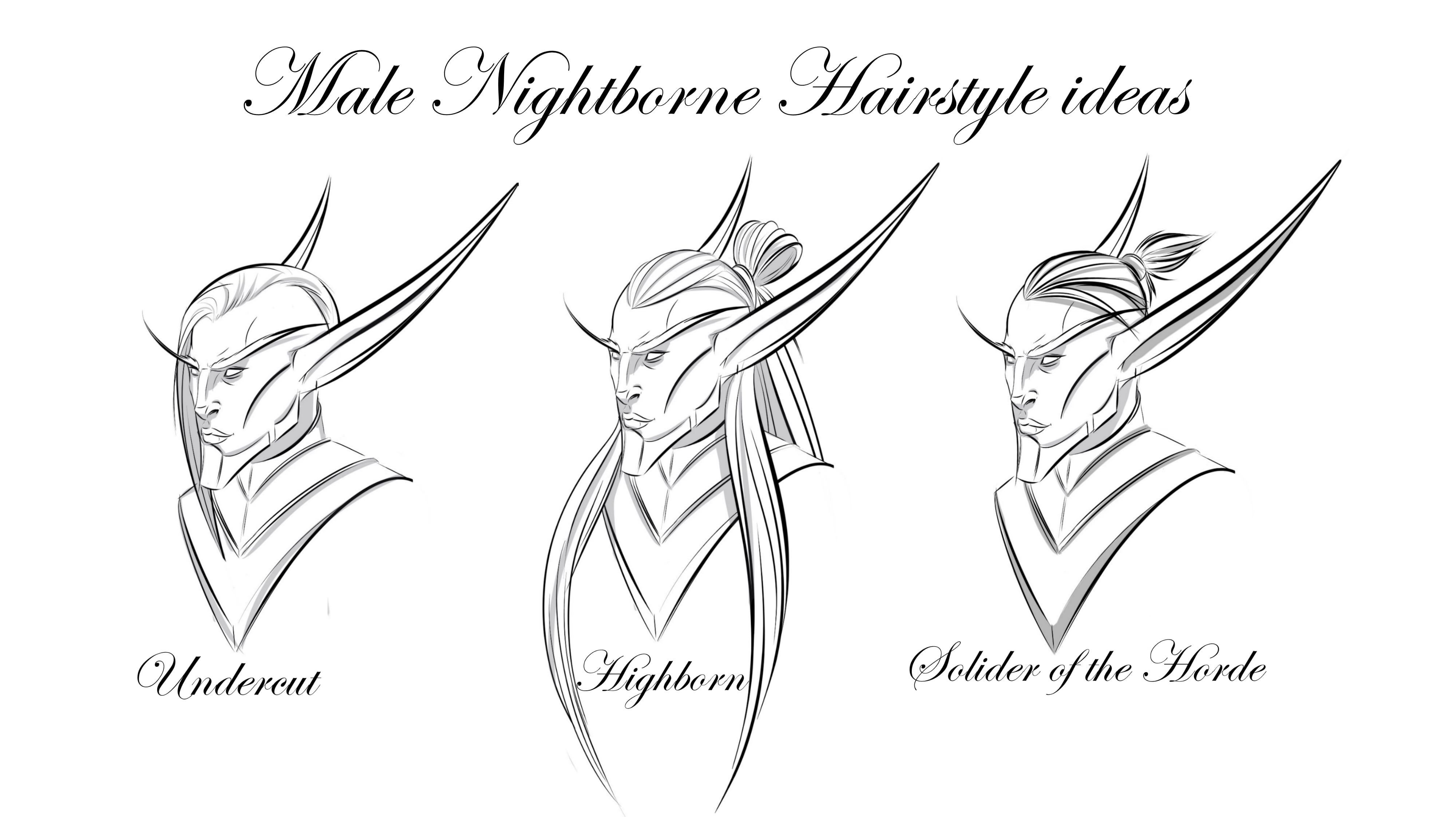 wish we could have options for body type, imagine ripped nightborne ; )

i have a feeling we will get more Nightborne customization can be something they bring up in next blizzcon ( Jan 2022 ) they add more customizations in 10.0.0 to increase the hype for next xpack just like they did in SL …

Sounds like blizz, but I personally won’t fall for that a second time… fool me once, shame on you. Fool me twice…

Pretty much. Arguing with certain players who consistently try to gatekeep a hair color is worthless, though.

Every race has blonde hair, yet when Void elves ask for it you claim they are stealing.

It would be stealing if Blood Elves lost access to the blond option. And that’s never going to happen. So if anything, it’s copying a Blood Elf option to Void Elves. And it’s a popular request from us Void Elf fans as well! We even made suggestions in our Void Elf Discord server* of mixing natural hair color options with Void highlights in case Blizzard deems it necessary to keep certain visual distinction between both playable races.

So in this case, I will count this as stealing from the Night elves. I used your own logic here.

It’s always funny when you use people’s logic against them. Here’s a high five

Pretty much. Arguing with certain players who consistently try to gatekeep a hair color is worthless, though.

Oh look, another lowborn peasant playing at nobility, all too about spreading their Void corruption in the Shal’dorei dedicated thread.

Dear fellow Ren’dorei, please do not turn the thread into velf/helf thread, we have enough of those.

The only peasants playing at nobility are the Nightborne.

The only peasants playing at nobility are the Nightborne.

So says the Kaldorei who plays an arcane mage and thinks being a mage is the definition of the Highborne.

The fact they are allied with savage trolls and orcs

The Horde values our traditions and values freedom of each community, unless Tyrande and her trust issues with the Highborne and forcing people to obey the laws of the lowborn commoners.

The Shal’dorei are the Kaldorei Empire in present times, and we have had no will to change our ways, that have been passed through for millennia.

We have allied ourselves with the Sin’dorei, as our kin from Kalimdor, found to be more savage than the trolls.

The fact they are hideous and constantly ask for Night elf normal-looking Customization.

Perhaps, you should look at the thread, and read what the Shal’dorei community wants, the requests for the Kaldorei customizations are made out of the desperate.

That is how you deal with those elves who have decided to play with the void.

We need to keep this thread alive, hopefully one day we will see more of love given to nightborne, which very needed right now

The fact they are hideous and constantly ask for Night elf normal looking Customization.

Nelf customizations would end up making them look even more horrendous. Maybe you should try reading what people are actually asking for.

I do hope they’ll reconsider with customisations and an update at a later date. The character creation options are embarrassing for Nightborne.

Also how hard is it to make them look like the actual Nightborne population instead of recoloured Nelfs.

Nelf customizations would end up making them look even more horrendous.

Maybe you should try reading what people are actually asking for.

Asking for Druids, Demon hunters, Azshara’s skin, more normal skin, and Night elf hair colors sounds what to you? because this is what i hear from Nightborne fans all the time.

I mean… at the end of the day i dont mind. Sharing is caring. I was just trolling my friend last month