Transfering out but to where? Realm getting more toxic, imbalanced & breaking immersion + RP

I’m fed up with the servers population and faction imbalance issues, and how we now are loosing a lot of good horde players levaing while having alliance (none RP players) player migrating here looking for payback from the ganking they experienced in their last server. This is getting toxic and is hurting everyone.

Not being able to access BRM, alliance camping outside major citities, zeppelines and boats around the clock besides the “normal” ganking in the leveling zones just take all the joy out of this. Dont give me the bs about whining about PvP servers, Ive been doing this a long time. This is not how a healthy PvP server looks like by any standard.
It really saddens me that I am even considering leaving the RP aspect of the game however with this mass ganking and denial of access to the content its not worth it imo.

I have 6 characters 40+ now so rerolling is not really favorable. I am looking to use the free character transfers. Question is where to. I am asking for input by people that have already transfered. 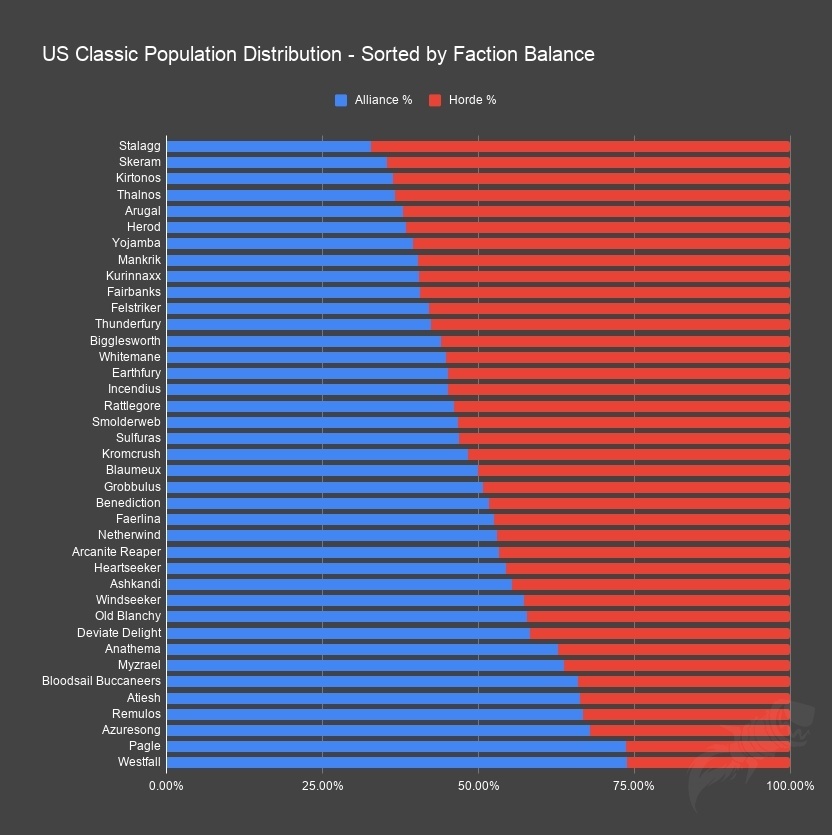 Today we will be looking into a community response to a limitation present in Classic: the lack of a character API. Members of the Classic community have developed a website to build an approximation of the realm population

’m fed up with the faction imbalance. Not being able to access BRM, alliance camping outside major citities, zeppelines and boats around the clock besides the “normal” ganking in the leveling zones just take all the joy out of this. Dont give me the bs about whining about PvP servers, Ive been doing this a long time. This is not how a healthy PvP server looks like by any standard.

I have 6 characters 40+ now so rerolling is not really favorable. I am looking to use the free character transfers. Question is where to. I am asking for input by people that have already transfered.

I am in the same boat

I dont’ wnat to transfer too. I have come the the conclusion that I will level and see how far I get with my 44 and possibly level my alts (like this one) untill BGs comes out. I have a hope that this will help the situation. If not then I think leaving wow is my option as I always said Classic will be where I started wow and where I leave it

But I second your opinion. It really was not like this before. But I dont think blaming players is the right thing. It must be Blizzard this time with their server structure. They just made too few from the beginning

Why would anybody who had transferred, still be checking this section? You’d be better off posting on their realm forums.

My experience with free transfer in the past is that they have a surge of people, then when the transfers close they die off and become dead clique community’s where you cant get anything done.

My experience with free transfer in the past is that they have a surge of people, then when the transfers close they die off and become dead clique community’s where you cant get anything done.

The realms they move to, basically free transfers in the past were used to get rid of alts/free up space on their home realm.

I think what they mean by graveyards is that, said servers are really empty and dead, so it’s where characters go to die before those players re roll on a higher population server.

Or at least that’s my understanding of the situation

Edit: Imo they should have offered transfer to hydraxian waterlords for those who are fed up of pvp and wanted a rp server, but now with phase 2 it is unfair to do that for the normal servers.

Yes, they should and this is what I‘m all about in every thread.
No, it is not unfair, as far as I can remember, transfers in vanilla were available for pvp->pve. By this logic it is harder to level your character on pvp realm and as soon as BGs are out, both realm types have equal chances to get pvp gear.

Yeah I guess you get lagged out by the horde raid in BRD gates thats why you cant enter these instances.

What’s your take on the link you’ve included in your post? According to the data ZT would be close to 50/50. If despite this it’s still supposedly imbalanced, what value does it have?

Zandalar is still a relatively balanced realm in terms of faction balance if you are to believe the user generated data, while alliance have 10% or so more active lvl 60s which does make a difference. I can buy that and if we are to believe the data we are better off than many other PvP realms.

I believe the even bigger reason we are seing such mass ganking that breaks immersion is because you have a lot of alliance player migrating to Zandalar from other realms where is was the other way around and they were constantly ganked by horde en masse. I have been going through a lot realm forums and this seem to be the narrative. So it wouldnt be too far fetched to speculate imo that a lot fo alli player transfering to here kind of wants payback. Problem is, its toxic and ultimately hurting everyone. And we then now have a lot of alliance player coming to an RP realm not interested in the RP community. Breaking the immersion or thinning it out for the alliance RP community as well.

So we now have a realm where horde players are leaving, for good reason and alliance migrate too. I cant blame the players, its really Blizzard faulth, it is really really poorly managed. It really would be a thing to consider letting ppl transfer from PvP to PvE atleast in the case of RP/PvP to RP server. Im not sure I wanna reroll it all again and if it doesnt get better after BGs open I will give this bs that is WoW up. Too much time currently being wasted being mass ganked and prohibited access to content, its not worth it.

I think ZT is one of the most balanced realms for both US and EU servers.

Can you even transfer from pure PVP or PVE server to RP-PVP?

Now I think this is why retail is so lame game. Everyone knew everything and so everyone suggested Blizzard what is good and what is bad. INSTEAD OF PLAYING THE GAME. And so the game lost its soul.
Back in late classic/TBC I played on Server where Horde dominated alliance. Even battlegroup was so bad that when you entered Arathi Basin Alliance got locked in Graveyard because it was 7 alliance vs 15 horde. Basicaly you could only play wsg out of peak times or at peak times you were sometimes lucky to get full team in AB. Not even mentioning AV. As for wpvp because it was kinda low populated server, ganking was not that hard but i remeber alliance players whining all over forums about it because they could not group up to fight back.
However it were the best times ever. I got best games in some of the battlegrounds by holding flags for hour till teams filled up on our side, or turned AB / AV from total loose to instant win. I will never forget that times

And I always rofled at these guys who transfered or even rerolled to other side. Because they went for easy and boring mode.
Now what it has to do with your situation?
Instead of trying to get out of the situation the most, you whine on forums and dont try fight back. You even suggest people to transfer instead to try unite and fight back.
Man this is why retail went so crappy, because players instead playing game, doing WPVP or RP or whatever went on forums and spamed their silly ideas to make game ‘‘better’’.
Dear Blizzard can you give me pikatchu? I am bored i wanna some Pokemon fights.
Dear Blizz can you give me my own house so I can afk, mine, plant flowers there, and totaly hide from other players?
Dear Blizzard can you give me epic drop every day?
Dear Blizzard can you layer me all the time from other players so I dont get ganked by higher level?
Dear Blizzard can you open transfers to my server because I wanna easy mode, YOU FIX IT FOR ME BECAUSE I PAY SO I WANT HAVE CLASSIC EXPERIENCE… OH WAIT THIS IS THE CLASSIC…

There aren’t enough high level people to fight back, also the classic experience was in a server with like 4k players, not 10k. This game wasn’t made for soo many people. And people would transfer anyway my man, not everyone likes fighting a losing battle or are just here for the RP (which they weren’t granted outside the few events that sometime happen)

There is no transfer aviable how you guys transfering?

Transfers have been open for over two weeks now

May you link page pls, on blizz forums there is not ZT on list(maybe its old date, but cant find others pages)

Although overpopulation is a problem. If the pop would be more vanilla-like things would be better for sure.

You know what is really funny? My old server(RP-PVP server I was playing on) had RP events destroyed by one horde guild all the time they found out there was an event happening. Alliance(and sometimes horde too) were complaining about it on forums a lot.
I remember they were hated for it. That guild wanted it anyways, to be efamous in that way too :D.(BTW that guild is on this server now, but they rolled Alliance).
Anyways the funny part is that you complain about the same.But try to think in RP way. You think if your character would live in real Azeroth…Would not your event got destroyed by passing enemy? I mean guys really wake up online world is not perfect, nor it should be. It is just as it is, you can make it better or worse same as real world, but you hardly change everything to your imagination.
And believe me, one day this server when it will be dying off, you will be able to RP a lot. Been there, done that.
All you need is determination, hope and pattience. Then you mostly get what you want. And then you realize its not enough and you will ask for pet battles…