TL:DR:
I’m looking for help from other players to decide what exactly makes sense playing with the current game’s narrative on the Horde side as I can’t dissociate the game narrative from my characters.
Your help is welcomed.

To give some context I’ve started playing WoW since October 2005.
Before WoW I played Warcraft and Warcraft 3.
I’m not a regular WoW player having missed out on several expansions, so there’s gaps regarding my lore knowledge about the game. I’m not even going to start on books I’ve never read them.

Essentially my problem is the Horde’s game lore and regarding how your character presents itself on the narrative.
Some players only care about achievements and unlocking rewards and frankly i think they are better this way as they don’t care about the lore.
I know role players create their own backstories so their characters may have a different perspective of the one described by the game.
On my case I simply can’t dissociate my characters from the in game actions so their background is tide to the game narrative.
That reflects on their naming, principles and transmoggs.

It all started when this character presented herself to Thrall back in Vanilla.
He said:
“All members of the Horde are equal in my eyes, (player name).
We have suffered many burdens, and if it were not for wisdom and honor, then we would no better than the scourge or my people while our blood was tainted by the demon Mannoroth.
It is your duty to aid the Horde and to defend our way of life.
But it is also your duty to know when quarter and compassion should be given to friend and foe alike.
Understand this well.
This is the new Horde, not some demon-sapwned army who lack free will.”

Now this made a lot of sense at the time to me, a faction trying to create a new future beyond their dark past.
With this in mind this were the characters I created at the time:

This character was created during a free trial 7 days period I don’t recall when:

I have been having this problem since the start of BFA.
I’m well aware of Garrosh’s reign of terror and how he was put down by Thrall.
For me that showed that even though brown orcs were supposed to be free of demon influence they were still pretty violent. Garrosh regardless of how the narrative try to excuse his actions by telling that Thrall left him to deal with the problems of a divided faction and the Alliance, he still went the exact same path as his father did: War.

This types of characters would likely be unfit to be in the Horde as they are of lawful nature:

I thought this was the last time I would had seen this type of narrative regarding the Horde.
With Vol’Jin being the Warchief I thought Legion would set up the narrative in a way the Horde and Alliance would be worried more about future threats than conflict between them. Unfortunately BFA proved I was wrong.

Steve Danuser stated this in a interview: 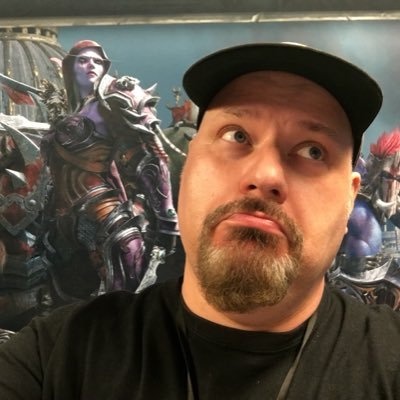 "The aftermath of a war is always messy. Expect repercussions from the Fourth War to carry forward for a long, long time."

There was more but essentially, my point is: BFA won’t be the last time conflict happened.
Going back to Thrall speech in Vanilla:
“We have suffered many burdens, and if it were not for wisdom and honor, then we would no better than the scourge or my people while our blood was tainted by the demon Mannoroth.”

So what types of characters would make sense in this new perspective ?
In my opinion people that follow what they are told and don’t question what they are ordered to do, unless someone like Vo’Jin during MoP and Saurfang during BFA tells them otherwise.

Characters created during BFA or that would fit the narrative:

After months of discussions in the story forum I came to the conclusion that:

With this in mind I would probably chose the best looking race for my characters and consider their moral compass to be determined by the games narrative, much like a nameless adventurer:

How would the backstory of this character be like ?
They were probably orphans raised within the Horde meant to fight.
None knows who their parents/family were, they were probably killed in past conflicts.
They have no name and if they are ever killed in combat a nameless grave is all that they have reserved for them in the future.

If you read this far I thank you for your attention.

Currently the Game Narrative is back to where the Horde whas when they founded Durotar and got in conflict with Daelin Proudmoure. I mean while Thrall freed them from Lethargie with Shamanism and Grom from the Blood Pact with Mannoroth both times where the Horde in less then best state. So I think Garrosh is a big repeat of the Second War Horde with Vol’jin doing what Thrall back then did. But as the demons came again they metaphorical drink with Sylvanas from the Blood again to get the power to survive. This time it whas Saurfang that sacrificed himself so the Horde could be free again but they need those whith wisdom and courage to bring them in the new times. The horde is still suffering from the concept of their honor. With the founding of the Horde back then on Draenor Honor whas to do as you ordered as the chain of command exist with reason and if you have problems then you can do a Mak’gora to death.
Under Thrall the concept whas a bit looked different as in “You finish your task as it is important and so is doing us all good.” but in the end it whas still the concept of “You do as you get told.” which you can see in Northrend by recruiting Taunkas. It whas Garrosh that showed them how it could be misused but as they had under Vol’jin more important problems and the Legion suddenly came the phillosophic question whas set on the high shelf. Now with Sylvanas is actually the time to ask themselves again, what actually the Horde is and what Honor really is and it at the moment need characters that take a stand during this time.

Essentially my problem is the Horde’s game lore and regarding how your character presents itself on the narrative.

Focusing on character immersion by binding them to the in-game narrative is challenging at best and soul-crushing at worst.
We are being presented a schizophrenic storytelling with an erratic narrative that changes for each patch, as that is Blizzard’s way of pitching players with:

Look over here, we are still interesting! Here’s new stuff and see that drama over there!

Nothing is supposed to make sense nor be a continuation of the past.

If your Horde character despises Garrosh’s and/or Sylvanas actions, the game doesn’t offer any choice on the matters. Either you tag along for the sake of quest rewards and unlocking future content, or you skip the content altogether. You wont add that campaign to your character’s story as they never would have gone that route when given the choice to begin with.

Your character’s tale is the story about what your characters are doing in-between the expansions and their forced narratives.

I would like to think that my Alliance characters are hanging out with the Horde Council right now as ambassadors of the Alliance, regardless of how I know that probably would be in violation of the setup of the Dragonflight story,

Thank you Skadefryden.
Your opinion helped me a lot.

Your welcome. Always happy to help.

Usually I always find ways to explain my character within the game narrative. Although each character might have its own challenge doing that.

This could be “easily” fixed by Blizzard but alas roleplaying is not the main focus of the game right now.

My fix would be to make the main quest something that almost every adventurer would be interested into.

The side quests would be there as optional content through which an adventurer can take a moral side (pun intended!).

Want to take it a step further? Incorporate an alignment system which is affected exclusively by the side quests an adventurer chooses to complete. Your alignment can then slightly modify the dialogues or the quest text of the main quests as well.

I know it will never happen but a player can still dream.