With the launch of Shadowlands, great numbers of players have left Azeroth for the afterlife, dramatically increasing player populations on every realm. For a small number of realms, demand has been overwhelming, and we’ve been working around the clock to address issues on those realms and make the game available to the maximum number of players.

Today, we’ve enabled the Free Character Transfer service for players who have characters on high population realms that are experiencing consistent, extended queues. If this service is available on your realm, you’ll access it in the Services section of the Shop on your character selection screen for that realm.

We strongly suggest that any players planning to use a Free Character Transfer do so as soon as possible.

Thank you very much!

Better be the big uns!

Hope this stops the threads…

Huh. There really must be a lot of people playing Shadowlands if Blizzard extends free migration this far and wide. That’s a lot of servers.

In before transfer character ques

Why haven’t you prioritized medium and lower servers on the list? People only moving around High/Full servers is not going to fix any problems.

Blizzard, please just continue the work you did, with Merging/Connecting servers. the EU still has massive population imbalances, especially as you rolled out a discount on transfers just before Shadowlands.

At least thanks for the transfers. <3

Edit: I managed to test this. Moving characters from Tarren Mill (Full) To:
Argent Dawn (full), Ragnaros (Full), Karazhan (full) Before I ran out of character slots on my account.

Edit(Again lol) I made a little video as people think I’m trolling. This was after rebooting and relaunching the game. I’ve transfered about 5 character now:

Edit: (For people say you can’t. I could) 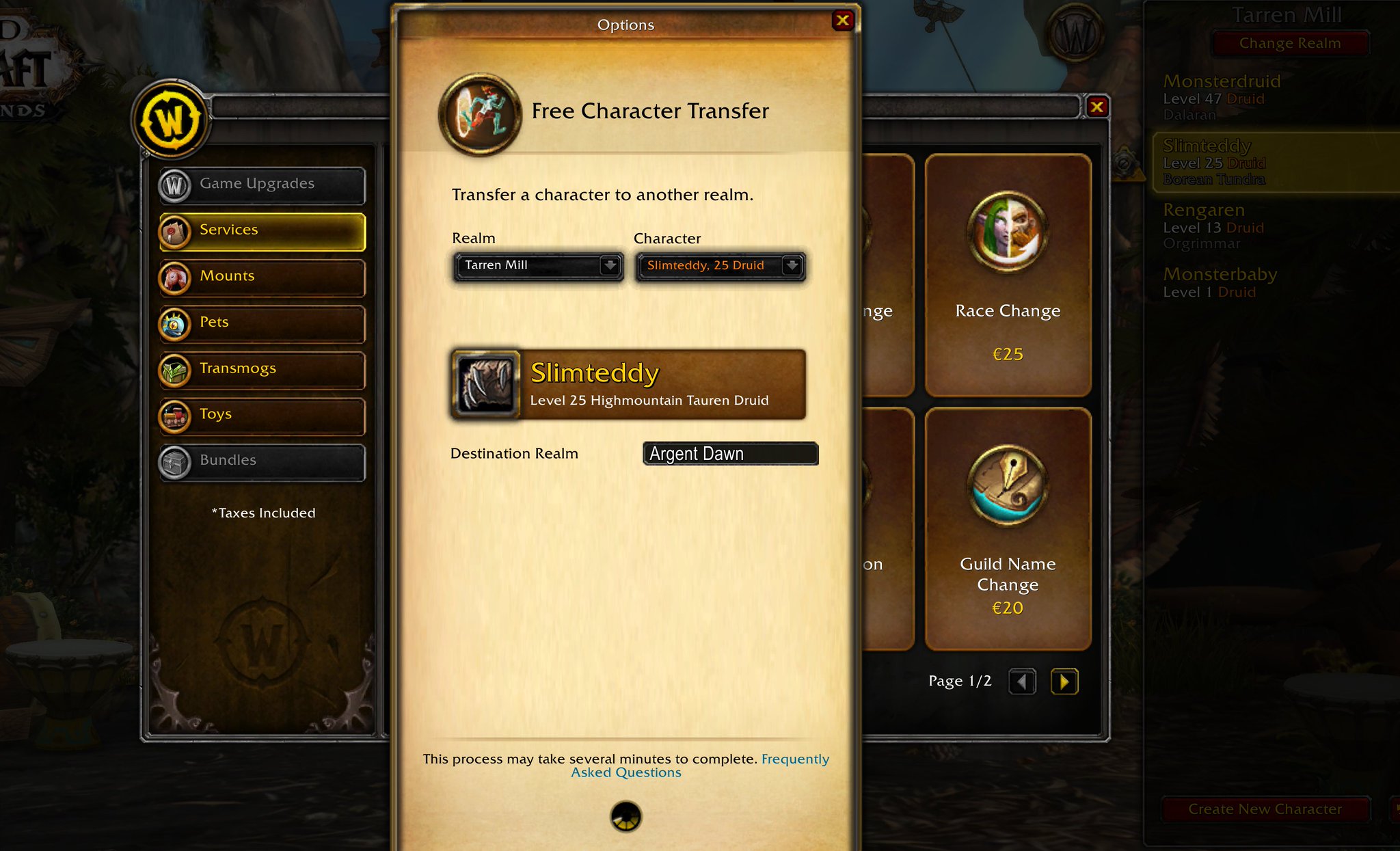 @WarcraftDevs Argent Dawn also High - But you could still go through and move there, despite it says in the thread you can't move to another High server. It defeats the point of free transfers if you don't encourage people to go to the lowest.

Edit: I did more testing on Tarren Mill. I could also move to “The Maelstrom” - another High Populated server. And I moved another character to “Ragnaros” which is also a Full server. 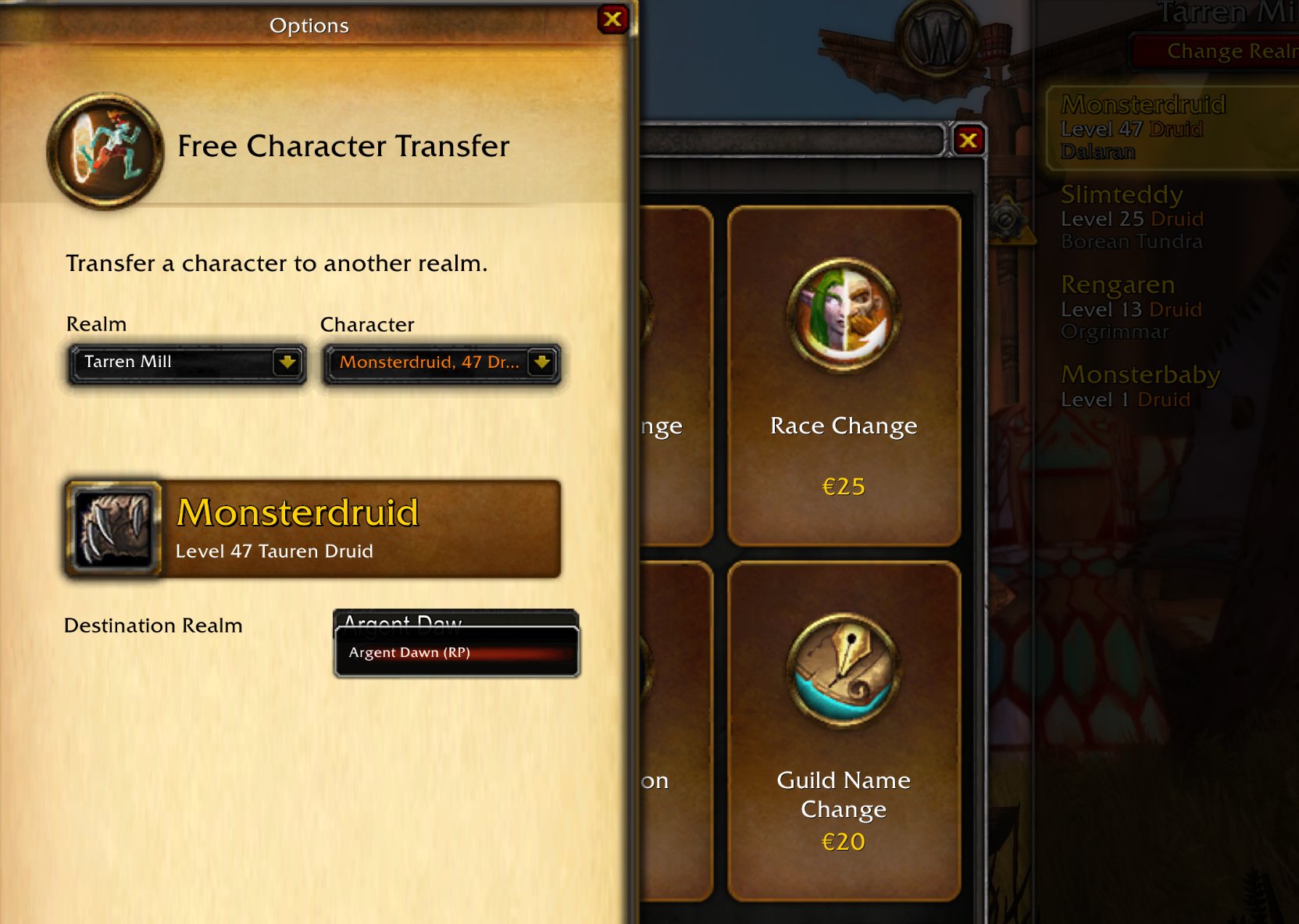 For people who say Argent Dawn isn't on the list... It is. #Warcraft @WarcraftDevs - and one is already pending to go there: 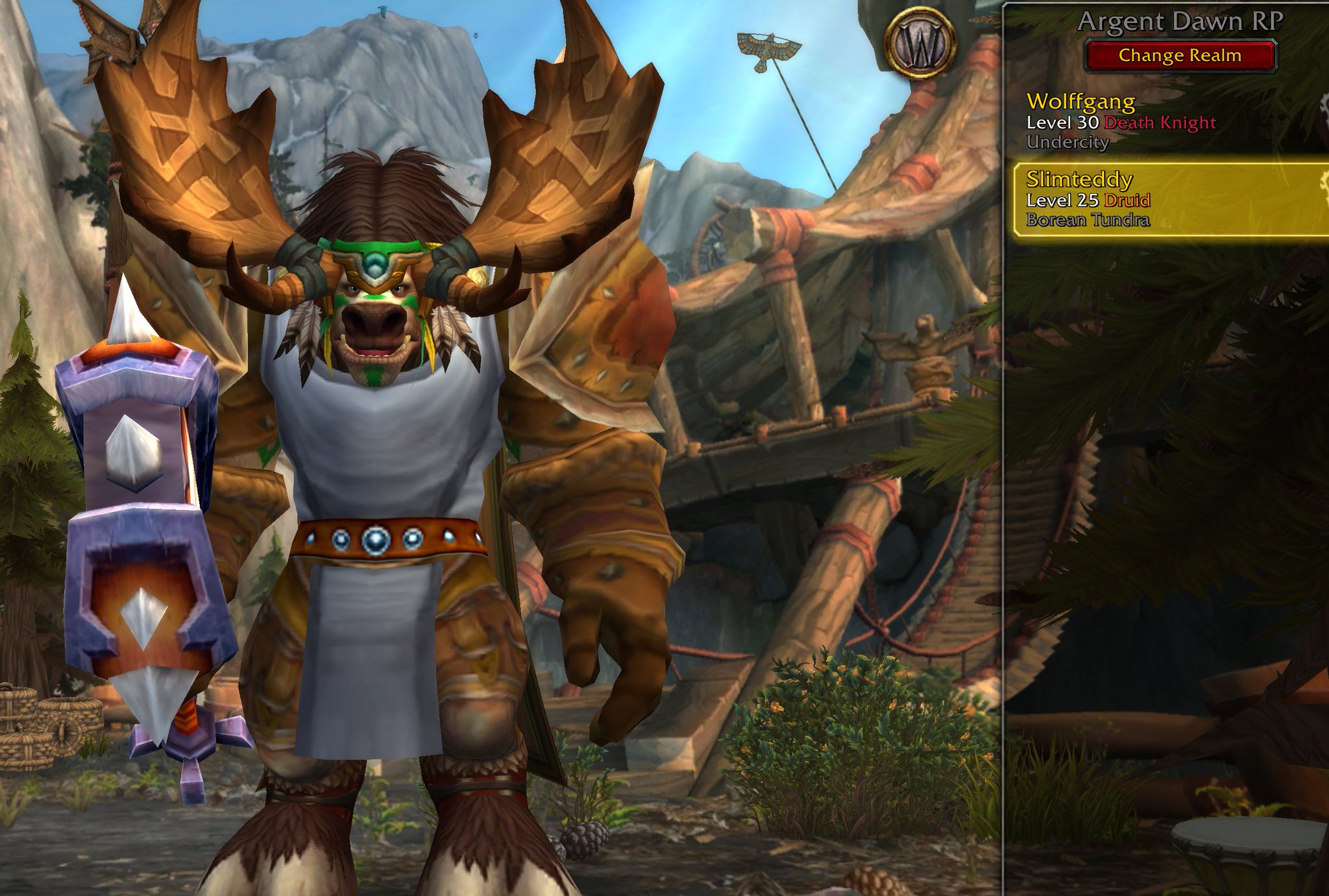 Another one moved sucessfully to Ragnaros (Also a full server)

(I will ofc delete all the characters. I just really like doing QA for Blizz, whether it’s in Alpha, Beta or on Live! <3 You Blizz.

You cannot select a destination realm that also has a high population.

Well that’s broken, because I can!

Edit: Yep! This guy is moving to Argent Drawn. From one Full Server to Another. : 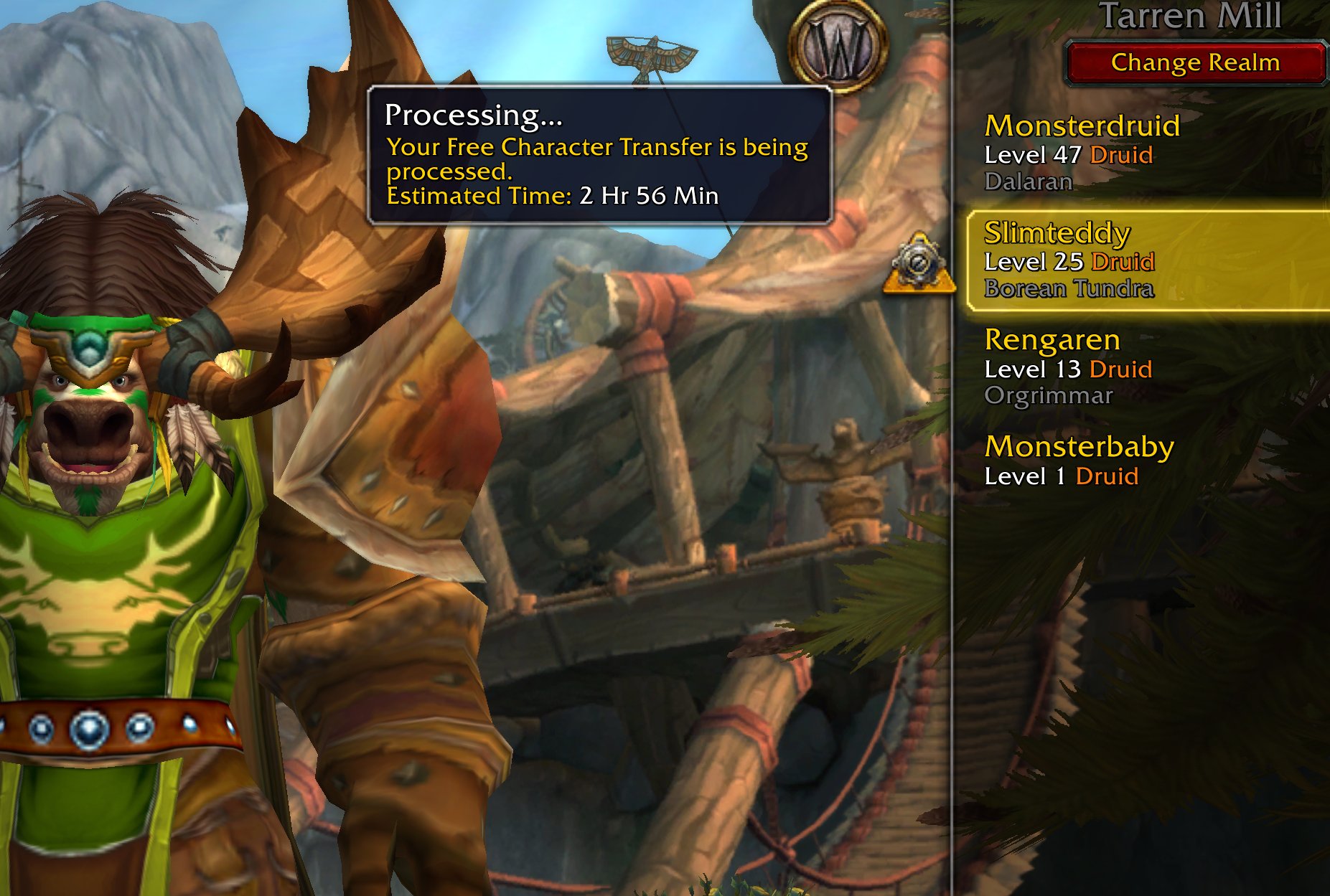 @WarcraftDevs @WarcraftDevs I just tested it. Moving a character from a Full server, to another Full server. Why are low population servers not prioritized? Please just do more server merges instead of this.. 🙏🙏🙏

My test-druid Slimteddy is now pending to go to Argent Dawn.

are you sure? i just tried it and i cant. when i type in tarren mill it doesnt offer me the drop down.

edit: dont get a drop down for kazzak as well

I cannot move to Argent Dawn. The big servers are unavailable.

Also thanks for this. Draenor can eff off. I’ll be transferring all my characters.

Because not every high/full server where having issues. For instance my main toons are on Silvermoon but my back up toon is on Revencrest which barely had issues at all this week so I was able to play my alt first(this toon) until today when I was able to get onto Silvermoon for the first time all week.

Kaivax, I have an issue and no one is listening, HELP! Please?

Mine is to do with mage tower appearances.

I unlocked the Mage Tower appearances on all 36 specs during Legion. And unlocked some of the colour tints. I thought I could go back and unlock them whenever to be unlocked on my account

I used to play on the Kul Tiras realm, where I unlocked the appearances. However, during BfA I started over again with 12 new characters on a more populated realm (Ravencrest). I then decided I wanted some of the tints for killing HC Kil’Jaeden. So I went on them completing it but nothing unlocked so I went back on the toons from Kul Tiras to unlock it on them. When I killed KJ the colour unlocked. Then I went on my Ravencrest toon and nothing there. So then I submitted a ticket to see if I was bugged.

I was advised to once again complete the criteria on the Ravencrest toons. I did kill HC KJ again and still no green DH tint for mage tower appearance. I was told to submit this as a bug.

Not for me. My 25 druid is now transfer pending to go from Tarren Mill to Argent Dawn, from high to high. Lmao fail.

Nah you failed:p now gm might reverse IT kekw

What are the best medium pop servers for Alliance and Horde?

Kazzak and draenor in a couple of hours =P